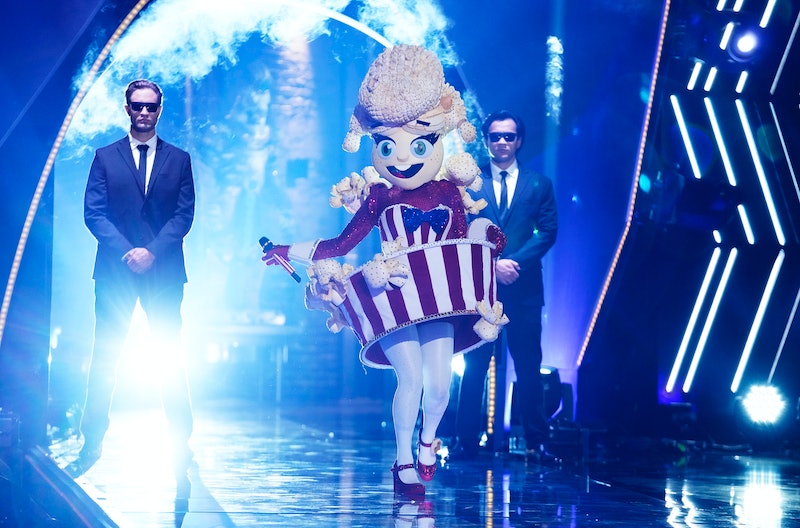 After winning an Emmy for her Season 3 designs, costume designer Marina Toybina really upped the ante for the Masked Singer Season 4 costumes. Among this season's ensembles? A two-person costume, a puppet, and a serpent with animatronic tentacles.

"I hope to push the envelope more and more with each season," Toybina told AwardsWatch in July. "So I’m working hard to apply the knowledge I’ve gained over the last three seasons to really take it to the next level this time around."

This season, that included having to navigate around the new protocols put in place due to the coronavirus pandemic. The benefit of the show is that everyone is already wearing a mask, "but now there’s just so much more to think about," Toybina told The Playlist. "How do we sterilize the masks right after they’re being worn? What materials will take in sweat that I need to consider? Is there an extra lining that has to go into the costumes? Are there any extra elements that I need to make sure are removable and easily cleaned and easily dry cleaned?"

See what they came up with below, from a baby alien to yet another monster.

The panelists get a double mystery with this two-person costume. So far, Jenny McCarthy has guessed The Brady Bunch's Maureen McCormick and Barry Williams or Donny and Marie Osmond.

A "hot clue" about this star's identity: they've "set quite a few records."

The celebrity in the Popcorn costume hints that their voice is like butter, and they once pulled off a big miracle.

Giraffe "has some tall tales" and joined the competition "to move and groove."

This "fired-up" celeb says they just want to make their audience happy and is the go-to for anyone who needs cheering up.

This costumed singer earned the distinction of being the show's first puppet.

In The Masked Singer's Season 4 "Super Sneak Peek" episode, this competitor said that they like to "find a quiet place to hide."

It's "always raining at least two men" when Broccoli is around.

Gremlin "can thrive when the temp is a cool 66.5 degrees."

If you want to know who's behind Mushroom's mask, you'll "need to figure out who's under [their] hats."

This celebrity's career "had a magical start."

Jellyfish may be cold-blooded, but this participant assures viewers that they "have a warm and glowy flow with H2O."

This star's voice can go high, but their "dishes go deep."

Much like Season 1 winner T-Pain's furry blue Monster, this year's Squiggly version is "nothing to be scared of."