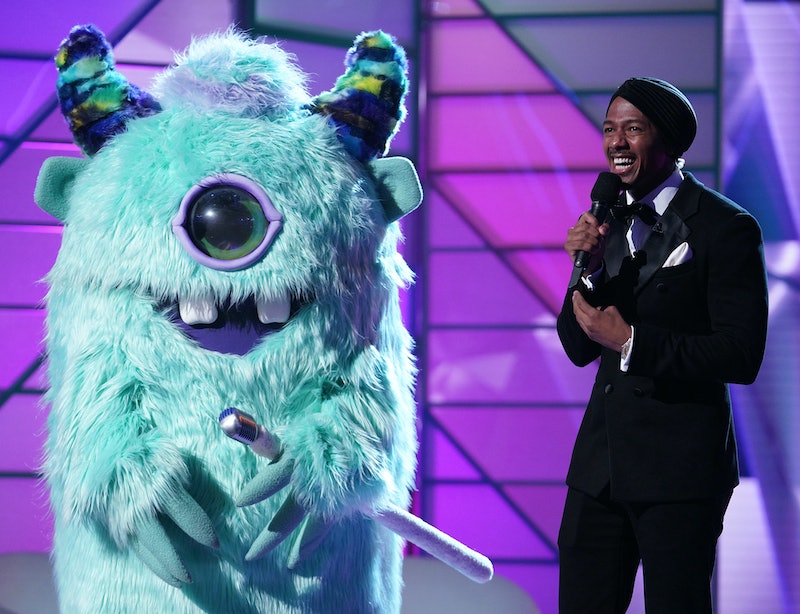 Since the beginning, the monster was the heart of the show, and now he's Masked Singer's Season 1 winner! The man inside the blue, one-eyed costume was none other than T-Pain, even though the panel never guessed his identity. Fans, on the other hand, had him pinned far before the final episode.

All of the three finalists were revealed in the Season 1 finale. First, the peacock sang Ray Charles' "Shake Ya Tailfeather," the bee sang Bonnie Raitt's "I Can't Make You Love Me," and the Monster rocked Montell Jordan's "This Is How We Do It." Then, Gladys Knight was unmasked as the bee and Donny Osmond was unmasked as the peacock, leaving only our furry friend left standing.

It's fitting that T-Pain, he who brought us such quintessential 2000s songs as "Buy U a Drank," was the champion of this bonkers show, but it's pretty wild that none of the judges even came close to figuring it out. One of the panelists guessed who was behind almost every other mask on this show, even as a joke, but T-Pain was, for them, a total surprise — and maybe that's why he won. Wouldn't you vote for the sole person who'd mastered the mystery of the competition?

"There's a lot of different emotions going on," T-Pain said in a post-mortem interview with The Hollywood Reporter. "I feel like a weight's been lifted off my shoulders from having to keep that secret for that long. Suck it everybody who told me I couldn't sing! I just won a singing competition! There's nothing else you can tell me. It feels like I'm the king of the castle." In the interview, he also talked about how fun it was to sing songs and cover artists that he doesn't normally get to do at shows, like Queen.

But while the panel may have been confounded, fans were convinced it as T-Pain going into the finale. Heck, the fact that the monster's first song was "I Don't Wanna Be" by Gavin DeGraw — a song that T-Pain actually has performed — practically gave it away.

"I went on a whole acoustic tour with no autotune and nothing backing me up and just a few pieces in a band and just raw singing and raw energy and small, intimate venues," he continued to THR. "I thought that proved the point to the world, but I guess not everybody can fit in those venues. It's a great platform to get that out there."

At the end of the episode, T-Pain closed the show out by singing his previously performed cover of Sam Smith's "Stay With Me" — not his most recent song "The Is How We Do It," as has been the tradition. Will we get to buy the live version on iTunes? Has The Masked Singer cast secretly recorded a soundtrack? Please, please, please?

We can all agree this is a well-deserved win, and the first season of The Masked Singer was a bonafide success. Now, the wait for Season 2 begins.

More like this
Every Celebrity From 'The Masked Singer' Season 8 Revealed Or Rumored So Far
By Gretchen Smail and Brad Witter
'School Of Rock' Changed Joe Keery's Life Forever
By Alyssa Lapid
Is Dua Lipa Dating Trevor Noah? New Photos Show Them Kissing & Hugging
By Brian Anthony Hernandez and Martha Sorren
Everything To Know About Taylor Swift’s 10th Studio Album, 'Midnights'
By Grace Wehniainen and Jake Viswanath
Get Even More From Bustle — Sign Up For The Newsletter