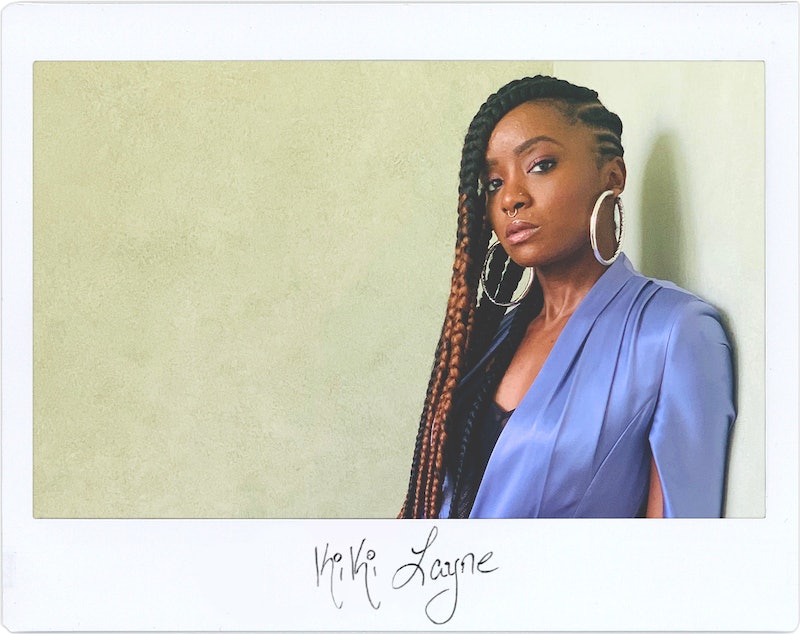 When celebrities (virtually) hang out with Bustle writers, we want to give them the chance to leave their mark. Literally. So we hand them a pen, a piece of paper, a few questions, and ask them to get creative. This time, The Old Guard star Kiki Layne is leaving her mark in the Bustle Booth.

When I ask Kiki Layne what drew her to Netflix’s The Old Guard, she doesn’t hesitate: “It's the bad-*ssness of it all.” Layne, 28, first broke onto the scene in Barry Jenkins’ adaptation of James Baldwin's 1974 novel If Beale Street Could Talk. Her performance as Tish — a 19-year-old whose budding relationship unravels when her boyfriend is falsely accused of rape — earned her the coveted “critical darling” status. But Layne isn’t one for labels.

“When I pick roles, part of it comes from just the little Black girl in me who wished that she could see more [representation on screen],” Layne tells Bustle. Following up her spate of prestige vehicles (Beale Street, Native Son, The Staggering Girl) with a big budget action pic was incidental. “[The Old Guard] definitely fell into that; seeing a kick*ss black woman out here saving the day.” In the film, Layne stars as Nile, a newcomer to a group of immortal mercenaries led by Charlize Theron. While her supporting character could have been depicted merely as an ingénue, in Layne’s hands she’s fully realized. The actor credits director Gina Prince-Bythewood for helping her dig deeper into Nile's mental state as she reckons with her newfound immortality. “Gina is so committed to representing us in a way that is so genuine. She wanted to make sure that she was shining a light on this very vibrant Black female character,” she says.

Layne’s next project will see her shape shift once again, this time testing out her comedy chops in the hotly anticipated sequel to Coming to America, out December 2020. Layne plays Eddie Murphy’s eldest daughter Meeka, the rightful heir to the throne of Zamunda. “She is a powerhouse. Meeka is a 'bad mother, shut your mouth,'" Layne says, playfully referencing Isaac Hayes' The Shaft theme song. "From the way that she carries herself to her amazing costumes." And while Layne refuses to be boxed in, it's clear the rising star has a character type: Black women who own their power, across all walks of life.

More like this
How To Stream Knives Out 2: When Will Glass Onion Be On Netflix?
By Radhika Menon
Here’s Everything Coming To & Leaving Netflix In December
By Jake Viswanath
'Wakanda Forever' Is Already Opening Doors For Mabel Cadena
By Grace Wehniainen
In 'The White Lotus,' Leo Woodall Gets His Moment
By Gabrielle Bondi
Get Even More From Bustle — Sign Up For The Newsletter