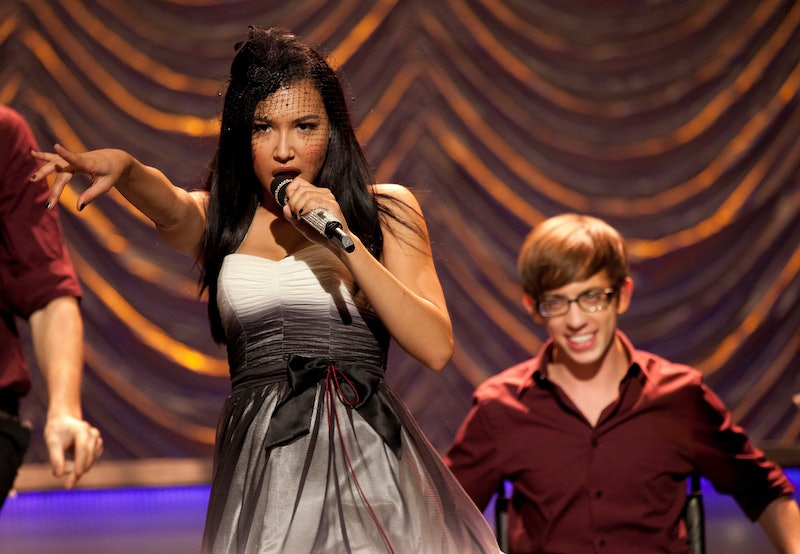 It's been five days since Naya Rivera first went missing while visiting Lake Piru with her 4-year-old son, but now the search for the former Glee star has come to a tragic end. Though many were still holding out hope that Rivera would be found alive, authorities have now confirmed the actress' death, having recovered her body from the lake on Monday, July 13. Upon hearing the news, fans have been revisiting her old performances, with one particular Glee performance by Rivera, singing a rendition of "If I Die Young," taking on a new, bittersweet meaning.

Rivera performed The Band Perry tune back in 2013 shortly following the death of her former costar Cory Monteith. The episode served as a tribute to the actor's character, Finn Hudson, who had also died on the show. But while Santana's song was initially meant to reflect the all-too-brief time Finn had on this world, those lyrics now hold an extra layer of sadness, knowing now what happens to Rivera in real life several years later. No one could've known then how deeply this song would resonate with Rivera's own fate, but it's definitely taken an emotional toll on Glee fans now that her body has been found.

"Just rewatched the Glee episode where Naya Rivera sang “If i die young” and cried my eyes out it’s so sad man," Twitter user @Joshlovesit19 lamented in a post. Rivera's body was discovered on the exact same day Monteith died seven years ago, making this song (and this day in general) all the more devastating.

News of Rivera's disappearance broke on July 8 after her son was found sleeping alone on a boat in the lake. He later told the police that his mom went into the lake but never came back. Since then, authorities have been searching the lake for clues as to what could've happened to Rivera. She was ultimately presumed dead, but without evidence of a body, it left Riveria's friends and family in a state of disbelief and confusion. "Nobody has heard anything," a source previously told People. "Everybody is in a wait-and-see pattern and trying to figure out exactly what happened."

Hopefully now that Rivera has been found, her loved ones will at least be given a sense of closure amid all of this heartache.

More like this
'The Queen’s Gambit' Season 2 Tweet Wasn’t From Anya Taylor-Joy
By Mary Kate McGrath, Jack Irvin and Grace Wehniainen
Taylor Swift Visited The 'Glee' Set For This Bizarre Season 5 Episode
By Grace Wehniainen
Netflix Shut Down 'Bridgerton' S3 Rumours About A “Very Dark” Storyline
By Bustle
Helena Bonham Carter Doesn't Think 'The Crown' “Should Carry On"
By Sam Ramsden
Get Even More From Bustle — Sign Up For The Newsletter
From hair trends to relationship advice, our daily newsletter has everything you need to sound like a person who’s on TikTok, even if you aren’t.