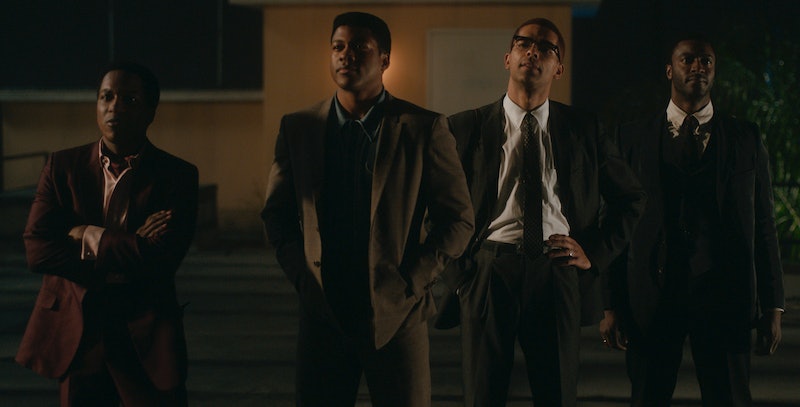 A good cast can make or break a film, especially when the story is about real people. So when Oscar winner Regina King set out to make her directorial debut with One Night in Miami, out on Amazon Prime on Jan. 15, she knew she had to get the cast right. The thoughtful drama tells the story one night in 1964 when four iconic Black men gathered together to discuss sports, music, success, and activism in a motel room in segregated Miami.

"We're talking about probably four of the most iconic men in the world, especially when you talk about Muhammad Ali and Malcolm X — and even Sam Cooke, whose music really transcends race and color and language," King says in the film's press notes. "So the audience knows so much about these four men that they are ready to cancel you out if you get it wrong."

Here's who's who in the cast of One Night in Miami.

Hamilton star Leslie Odom Jr. uses his musical chops here as music legend Sam Cooke, whose work influenced blues, soul, rock, and the British Invasion of the 1960s. As the film implies, his eventful night in Miami with Malcolm X, Cassius Clay, and Jim Brown would go on to inspire the writing of his longest-lasting hit "A Change is Gonna Come."

He did really go into the studio and record many of Cooke's hits, like "(I Love You) for Sentimental Reasons," "You Send Me," and "A Change is Gonna Come," so all of the singing in the film is from Odom Jr. "Those were some big shoes to fill," he says in the press notes. "I have such respect and admiration and awe for his talent and what he was able to achieve."

English actor Kingsley Ben-Adir has been seen in a lot of TV stateside, such as Peaky Blinders, The OA, and High Fidelity. He played President Barack Obama in the miniseries The Comey Rule, and he's making kind of a big-screen breakout by playing Malcolm X in One Night in Miami.

In her director's statement, King says that a lot of actors shied away from the role, saying they didn't want to be compared to Denzel Washington's Oscar-nominated performance.

“The more I investigated the script, it became pretty clear quite early on that it was a completely different Malcolm," Ben-Adir said during AFI fest, Variety writes, offering him "an opportunity to show him in a way that maybe we haven’t seen him before: vulnerable and broken."

Eli Goree, who has played fictional boxer Munroe "Mad Dog" Moore on Riverdale and real-life quarterback Quincy Carter on Ballers, looks a lot like Cassius Clay in real life, and also seems to share his playful personality. When he talks about meeting King for the first time in the film's press notes, he says "I went in and saw Regina. She tried to act like she wasn’t super impressed. She tried to like play it cool. But I knew there’s nobody that looks more like Clay, sounds more like Clay, or that’s been boxing for two years like me. I don’t care where you go, you aren’t going to find somebody like that."

Goree did a lot of intense boxing training for the film, and had to learn to fight like Clay did at the time. "I put on 20 pounds of muscle," he tells Fashion Magazine. "You can never fully emulate someone who was the best ever at what he did but you want to honor and respect it, and create a sense of authenticity so when people watch it they don’t get taken out of the story. It was a big undertaking and I really gave it my all."

Aldis Hodge has been acting since 1995's Die Hard with a Vengeance. In One Night in Miami, Hodge plays Cleveland Browns fullback Jim Brown, who is still considered one of the best football players ever.

Though lately, Brown has been a vocal Trump supporter, Hodge wanted to capture his attitude and politics in 1964. “In terms of political and personal views, I wanted to stick to that time frame because he’s in a different mindset today," Hodge says in the film's press notes.

In the story, Brown serves as kind of a referee for the heating debates between Cooke, Clay, and Malcolm X, though he does have some passionate views of his own. "Where we find Jim in this whole spectrum is, he’s able to understand what Malcolm is saying and what he wants while at the same time what Sam is saying and what HE wants. He realizes they’re not hearing each other — and that’s [often] where we are to this day as a culture," Hodge tells the Chicago Sun-Times, "in that a lot of us are shooting at the same goal, we’re just using different means of getting there. Jim is trying to bridge the gap between the two guys."