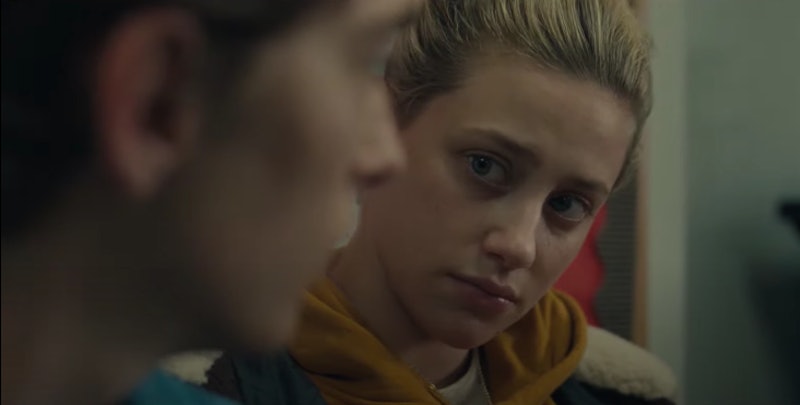 The story of a fraught romance between a school newspaper editor and the girl he just can't get enough of, Krystal Sutherland's Our Chemical Hearts will finally have its time on the screen this year. Chemical Hearts just dropped on Amazon, so now's the perfect time to refresh yourself on all the details of the Our Chemical Hearts book ending. Although some plot elements may have changed in the making of the film, writer-director-producer Richard Tanne tells Bustle that he "was so moved by [the] ending," that he kept it whole. Major spoilers for Our Chemical Hearts follow.

Our Chemical Hearts centers on Henry and Grace, two teenagers who meet when they're asked to edit their high-school newspaper. Grace turns down the job at first, agreeing to take it only if she isn't required to write for the paper. Intrigued, Henry becomes infatuated with her and determined to get to the bottom of her personal mystery: why she uses a cane, wears "masculine" clothing, owns a car she refuses to drive, and is generally cold to everyone she meets.

Grace has an excellent reason to not want to date Henry or get into a relationship at all. As it turns out, she uses a cane because she injured her leg in a car accident, which killed her longtime boyfriend, Dom. Grace now lives with survivor's guilt, depression, and PTSD, in addition to her physical disability. Her mental illnesses are nothing that Henry — despite his best efforts — can repair through his love. Rather, they require professional care, which Grace is never shown to receive in the novel. But that doesn't stop him from repeatedly trying to make his friend get "better," however.

"I was just struck by how raw it was," Tanne says about his introduction to the novel, praising "how unafraid the book was to embrace the pain and anguish that can sometimes go along with being a teenager."

Chemical Hearts stars Austin Abrams and Lili Reinhart as Henry and Grace: the two high-schoolers at the center of Sutherland's novel. Reinhart, who also serves as executive producer on the film, approached Tanne with the idea of adapting the novel after the two met while she was filming Riverdale. After a single reading of Our Chemical Hearts, Tanne says he knew what he wanted the film to be.

"I knew what I wanted it to feel like tonally: the mood, the look of it, the sound of it, the structure — I had an idea of what appealed to me in making a film version of it," Tanne says. "And I talked to Lili about that, and she liked where my head was at so I immediately started writing the script."

And Sutherland reportedly agrees with Tanne's interpretation of the novel. "After I finished the script, the author read it, and she granted me and Lili the rights to make the movie," he says. "She also was very positive and enthusiastic about my adaptation, and told me that I was the right person to do this."

As you might imagine, viewers who come to Chemical Hearts looking for a happily-ever-after ending may walk away disappointed. Although Our Chemical Hearts seems like your typical YA romance setup at first glance, Sutherland's novel ends on a bittersweet note. Despite his attempts to get close to Grace, Henry can't make her acquiesce to his attempts to "fix" her, and he can't stop her from pushing him away. At the end of Our Chemical Hearts, although Grace's physical and mental states appear to have improved somewhat, her short-lived, secret romance with Henry is over, and he is left to deal with the pain of his unrequited love alone.

According to its creator, the Chemical Hearts film adaptation will retain all the details of the novel's closing. "I was so moved by Krystal's ending," Tanne says. "You will see some differences in the way [Henry and Grace] meet. Some very minor things. You will definitely see differences along the way. But I believe the ending is, for the most part, intact. And if I'm wrong about that, I'd love for fans to correct me."