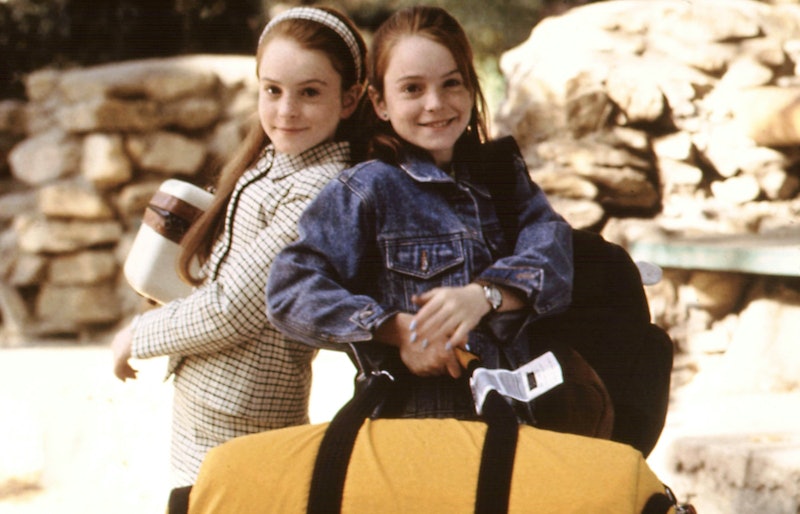 No, you're not seeing double, but Annie James and Hallie Parker are back on your screen — kind of. Lindsay Lohan reprised her iconic role for the Parent Trap cast reunion, over 20 years after the iconic film's debut, which also served as her breakout film. Lohan was joined by writer-director Nancy Meyers, writer Charles Shyer, and stars Elaine Hendrix (Meredith Blake), Lisa Ann Walter (Chessy), Simon Kunz (Martin), and of course, onscreen dad Dennis Quaid (Nick Parker) for the reunion, which was hosted by Katie Couric and posted on her Instagram channel on Monday, July 20.

During the reunion, the Parent Trap cast spilled a ton of behind-the-scenes secrets, including the audition process and their favorite scenes from the film. Lohan even recreated her own favorite scene with Quaid, where Annie (as Hallie) calls her father "dad" way too many times after meeting him for the first time, unbeknownst to her dad. "There was such lovely and beautifully written moments, funny but just heart-wrenching," she remarked. “You forget… how much you miss people until you’re actually with them and you haven’t seen them in a while. And I think those scenes really tear me up.”

Quaid, for his part, said that he loved falling into the pool at the San Francisco hotel, which he noted was extremely cold. "If you want to talk cold, then let's talk about the lake, please," Hendrix retorted, referencing the iconic moment when the twins send Meredith floating on an air mattress in the lake while she slept, resulting in a brutal wake-up call. "Your screams were epic," Lohan remarked. And while many viewers thought the evil almost-stepmother deserved it at the time, years of retrospect has led many viewers to argue that Meredith was actually an aspirational woman and simply ahead of her time. "There’s a whole generation who think Meredith is #goals," Hendrix said of her character.

The cast also paid tribute to their late co-star Natasha Richardson, who played Annie and Hallie's elegant mother Elizabeth James in the film. "Natasha had such an elegance and grace, and she was so maternal to me," Lohan remembered, with Hendrix recalling how Richardson would lovingly talk about her family in the hair and makeup trailer, calling her husband Liam Neeson "my Liam." Quaid added, "[She was] somebody so giving and glad to be there and transmitted that joy of being able to do what we do... It just made everything that much better."

Lohan ended the reunion on a sentimental note, calling the film an "incredible learning experience" and explaining how it made processing her own parents' separation much easier. "I didn't feel like I was working," she said. "Without this movie, I wouldn't have gotten the acting bug. How do you not want to only act for the rest of your life after doing a film like this, with such great actors? It's timeless and special... and I just feel really blessed and really grateful to have been apart of it."

More like this
The 'Scream 6' Trailer Shows Off Hayden Panettiere's Return & Ghostface In NYC
By Jack Irvin and Jake Viswanath
12 Years Ago, Austin Butler Manifested His Oscar Nom In This Disney Movie Scene
By Jake Viswanath
'Abbott Elementary' Fans Probably Missed This 'Parent Trap' Easter Egg
By Sam Ramsden
Sandra Bullock’s Razzies Speech Proves She’s The Ultimate Miss Congeniality
By Sam Ramsden
Get Even More From Bustle — Sign Up For The Newsletter
From hair trends to relationship advice, our daily newsletter has everything you need to sound like a person who’s on TikTok, even if you aren’t.