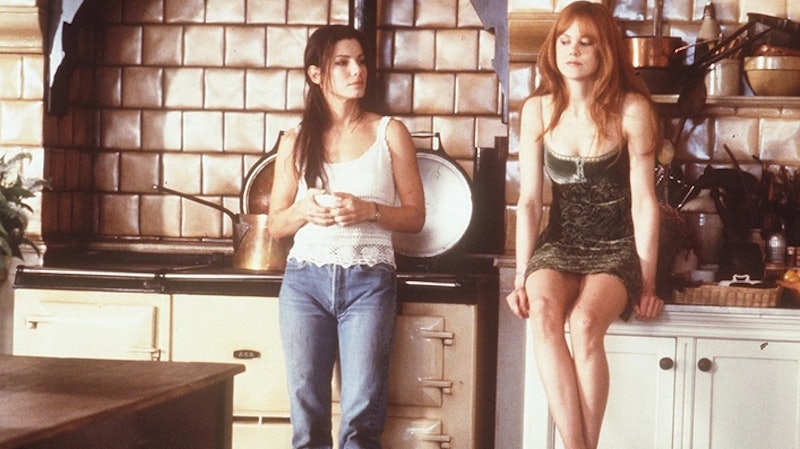 Practical Magic fans, get ready. Alice Hoffman's Magic Lessons, the Practical Magic prequel, explores the events that led up to the Owens family's infamous curse — and if you're looking for a spooky, nostalgic new book, you can start reading it right now, exclusively on Bustle.

Magic Lessons is the second of Hoffman's Practical Magic prequel novels. The first, The Rules of Magic, centers on Sally and Gillian's aunts, Franny and Jet, growing up in New York City. Magic Lessons reaches way, way back to find the foundling Maria — the Owens' family matriarch — adopted and raised by Hannah Owens in 17th-century England. Centuries before Sally and Gillian raised a little hell in Massachusetts, Maria lived and loved by her own rules on both sides of the Atlantic.

Brimming with heart, Alice Hoffman's Magic Lessons, is the sort of book we all need this Halloween. You can pick up your copy today, wherever books are sold, and start reading below.

She was found on a January day in a field where the junipers grew, wound in a blue blanket with her name carefully stitched along the border with silk thread. There was a foot of snow on the ground, but the sun was strong and whoever had named the child Maria had most assuredly loved her, for the wool of the blanket was of a very fine grade, certain to keep her warm, and she’d been well cared for, not lacking for comfort or food. She was a quiet baby, but as the day passed she began to fuss and then to cry, doing so unfailingly and with great effort, until at last a crow came to perch on her basket, peering at her with its quick black eyes.

That was how the old woman discovered the abandoned child, staring at a bird nearly as large as herself, fearless and wide-eyed from the start. Maria was a beautiful baby, with pitch-black hair and pale gray eyes, a silvery shade so unusual the old woman wondered if she wasn’t a changeling, for this was a place where strange things happened and fate could be a friend or a foe. Changeling or not, Hannah Owens carried the baby back into the woods, singing as they went, the first human words the baby would remember.

The water is wide, I cannot get oe’r it

And neither have I wings to fly

Give me a boat that will carry two

And I shall row, my Love and I.

O down in the meadows the other day

Agathering flowers, both fine and gay

Agathering flowers, both red and blue

I little thought of what love could do.

In the child’s first days at Hannah’s cottage, the insistent bird beat his wings against the cloudy, pitted glass window, doing his best to be let in. He could not be chased off with pails of vinegar and water nor with shouts and threats. One could hardly toss stones at such a loyal creature. The crow had been allowed to stay and was called Cadin, a name derived from Maria’s baby talk name of Cawcaw. Whenever the weather turned foul, he settled onto the wooden perch kept beside the sooty fire. There he cleaned his gleaming feathers and kept a sharp eye on Maria.

“I suppose he’s yours,” Hannah had said to the baby in her basket when seven days had passed and the crow had not left his post on the fence surrounding the garden, not even to eat or drink. “Or perhaps you’re his.”

Hannah knew full well that you do not choose a familiar, it chooses you, bonding with you in a way no other creature can. Hannah, herself, had long ago made a pet of a she-cat that had followed her everywhere, a pretty marmalade-colored tabby with lovely markings, a beloved familiar that was in tune with her thoughts and desires. On the day Hannah was let out of prison, she found the cat nailed to the door of her house in the village. That’s what her neighbors had done while she’d been imprisoned, as well as robbing her of the few belongings she’d had, a feather mattress, some pots and pans, a quill pen. Hannah carried the cat with her into the woods, and buried it in the green hollow where she had camped before her cottage was built, a glade she called Devotion Field where bluebells grew in the spring and celandine shone through the last of the winter frost in a carpet of white and yellow stars. The beauty of that meadow reminded Hannah of the reasons to live in the world, and the reasons to mistrust those who saw wickedness in others, but never in themselves. The natural world was at the heart of her craft; what grew in the woods could harm or heal, and it was her obligation to know the difference. It was part of old Norse tradition, Seidhr, that had been brought to England in the ancient times. This was green magic, visionary in nature, blending the soul of the individual with the soul of the earth.

It was indeed good fortune that the child had been found by Hannah and not by another, for there were many in Essex County who would have disposed of an unwanted baby as easily as they’d have drowned a cat. Hannah was a kind and generous soul, and she didn’t think twice before giving the baby a home and, as it turned out, a great deal more. She stitched a blue dress for the child, for good fortune and protection, and tied a strand of blue wool around her ankle.

Residents of nearby villages and towns believed that among the good and decent folk there were hidden servants of evil who caused children to die of pox and fevers and could curse the land so that it lay fallow. What people believed often came to be, and blame was placed where it was imagined. This was the year when two comets streaked across the sky for mysterious causes and a volcano that had begun to erupt at Mount Etna in Italy would soon spread ash as far as their own village, so that it seemed to snow in March. Within a year, two poor souls in London were infected with the plague, with more and more falling ill each day. People wore masks and locked themselves in their houses, yet the illness still found them, sliding under doors, it was believed, or flowing through windows, but in truth the disease had been brought from house to house by doctors who didn’t know well enough to wash their hands. By 1665 the city would lose sixty-eight thousand inhabitants.

When Maria turned two, the great fire of London destroyed seventy thousand homes in a city of eighty thousand, and smoke filled the air for the entire month of September. Birds fell from the sky and children coughed up black phlegm, a sign they would not see their next birthday. The world was a dangerous place where people were punished for their sins and most believed that good fortune depended upon a measure of faith and superstition. These were years when cruel and unexplained things happened, and kindness was a rare and valued gift, one that Hannah Owens happened to possess.