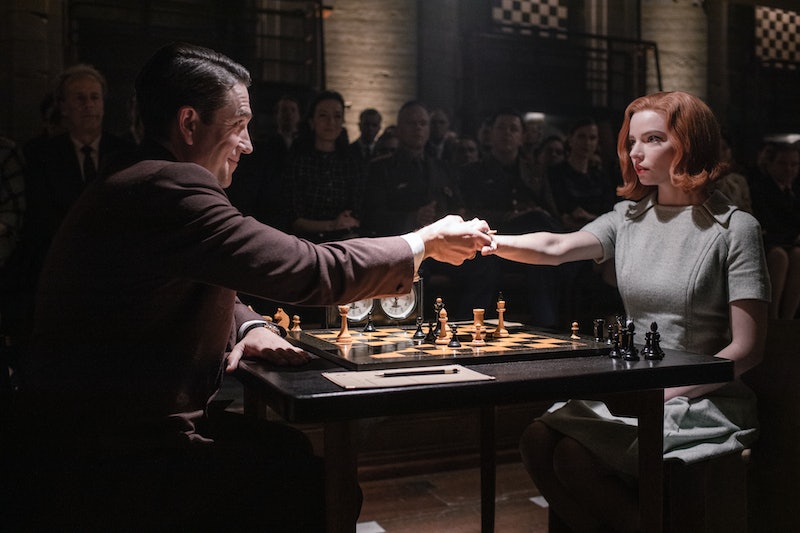 After nearly 40 years on the shelf, Walter Tevis' 1983 novel, The Queen's Gambit, is finally headed to a screen near you. The Queen's Gambit book ending is a fierce and hopeful celebration of one young woman's journey into her own power. Tevis' novel ends on a brilliant, feel-good note, and it's exactly the kind of story we all need right now. Spoilers for The Queen's Gambit follow.

The Queen's Gambit centers on Beth Harmon, a shy Kentucky orphan who finds out she has a natural talent for chess. She hones her skill in the game over the course of eight years, going to compete in the U.S. Open at age 16, where she draws with Benny Watts: a grandmaster and U.S. Champion. She faces Benny again at the U.S. Championship, where she beats him, earning herself a spot in the Moscow Invitational in the process.

Getting to Moscow means playing against the world's highest-ranked chess players, but it also means traveling to the U.S.S.R. at the height of the Cold War. After choosing Benny as her second, Beth initially secures funding for their travel, food, and lodgings from a Christian organization. When the Christian Crusade asks her to make a statement opposing communism and atheism in the U.S.S.R., however, the nonreligious Beth severs ties with them — a move that causes Benny to cancel his plans to attend the invitational with her.

Accompanied only by a man from the U.S. State Department, Beth travels to Moscow to compete, knowing that the invitational provides her with the opportunity to redeem herself for the most embarrassing game she ever played: a Mexico City match against Russian grandmaster and World Champion Vasily Borgov, which ended with her concession. After battling her way through the ranks of the Moscow Invitational, Beth faces off against Borgov again.

This time, everything has changed. Mid-way through their match, Borgov requests to adjourn the game until the next day, giving both players time to strategize. When they resume play, he offers Beth a draw, which she does not take. She plays in a fugue, worried she's made the wrong decision, until she sees victory in 19 moves. It takes Borgov 15 moves to realize he's been bested. From the novel:

"When she set the knight down, there was complete silence. After a moment she heard a letting-out of breath from across the table and looked up. Borgov's hair was rumpled and there was a grim smile on his face. He spoke in English. 'It's your game.' He pushed back his chair, stood up, and then reached down and picked up his king. Instead of setting it on its side he held it across the board to her. She stared at it. 'Take it,' he said."

Beth's victory over Borgov earns her the opportunity to challenge him for his World Champion title in a 24-game match. With two years standing between her and their next face-off, Beth heads home... but not before stopping off in a Moscow park to play a match of chess against an elderly man who has no idea who she is.

Netflix's adaptation of The Queen's Gambit stars Anya Taylor-Joy (The Witch) as Beth, with Thomas Brodie-Sangster (Maze Runner: The Death Cure) and Marcin Dorocinski (The Pact) appearing as Benny and Borgov. The Queen's Gambit begins streaming on Oct. 23.

More like this
Netflix Shut Down 'Bridgerton' S3 Rumours About A “Very Dark” Storyline
By Bustle
'The Queen’s Gambit' Season 2 Tweet Wasn’t From Anya Taylor-Joy
By Mary Kate McGrath, Jack Irvin and Grace Wehniainen
'Wednesday' Star Emma Myers Thinks A Wenclair Storyline Is “Possible” In Season 2
By Alyssa Lapid
The 'Freeridge' Cast Shared Their Hopes For A Potential Season 2
By Grace Wehniainen
Get Even More From Bustle — Sign Up For The Newsletter
From hair trends to relationship advice, our daily newsletter has everything you need to sound like a person who’s on TikTok, even if you aren’t.