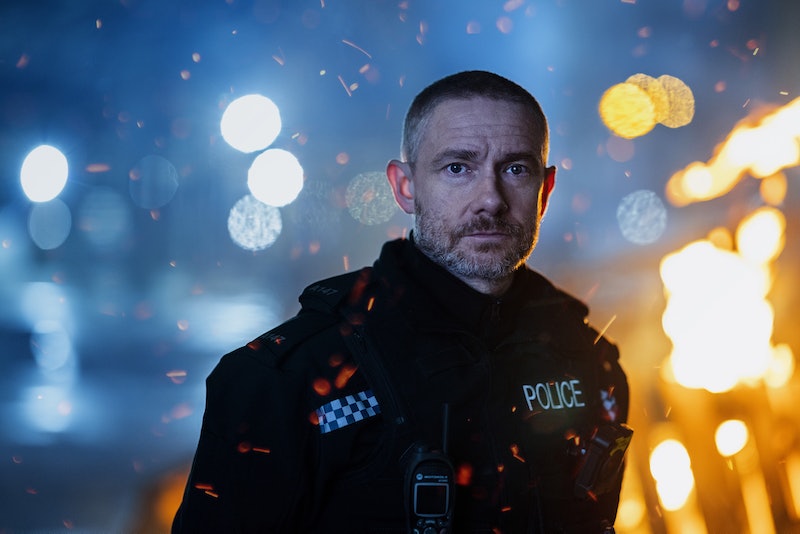 BBC’s new drama, The Responder, holds up a mirror to the challenges faced by officers on the front line of British policing, and centres on the story of an urgent response officer in Liverpool over the course of several high-pressured night shifts. But, what is it that inspired the BBC’s latest crime-drama, and is The Responder based on a true story?

In short, yes, The Responder is based on true events. The series is created, written, and executive produced by the author, screenwriter, and broadcaster, Tony Schumacher, who previously worked as a response policeman in Liverpool. While penning the BBC drama, he drew from his real life experiences on the job.

In the small-screen adaptation of his time in Merseyside Police, Schumacher is portrayed through the character of Chris Carson, played by Martin Freeman of Sherlock and Fargo fame. The Responder follows the “morally compromised” Carson as he is forced to take on the new rookie officer Rachel – played by Adelayo Adedayo – in the exceptionally tense world of night-time policing.

Discussing the new series, show-writer Schumacher explained how the drama explores the “darkness” of the mental health struggles he had dealt with in his own life. “When I wrote that element in the script it was like having paid therapy, because it was in me. I got to write it down on the page and see Martin play it out on screen,” Schumacher said of the show’s development.

However, there are lighter elements of the story. “It’s funny, it's dramatic, it's exciting. It is beautifully acted and it's something that you probably haven't seen before and you will really enjoy it,” he added.

More like this
ITV's 'Maternal' Was Inspired By A Very Simple – & Unanswerable – Question
By Maxine Harrison
This First Look At 'The Gold' Shows Jack Lowden In A Whole New Light
By El Hunt and Sam Ramsden
'The Traitors' Is Officially Being Turned Into A Board Game
By El Hunt
Twitter Is Burning As Phoebe Dynevor Reveals Daphne’s 'Bridgerton' Exit
By Sophie McEvoy
Get The Very Best Of Bustle/UK
Sign up for Bustle UK's twice-weekly newsletter, featuring the latest must-watch TV, moving personal stories, and expert advice on the hottest viral buys.