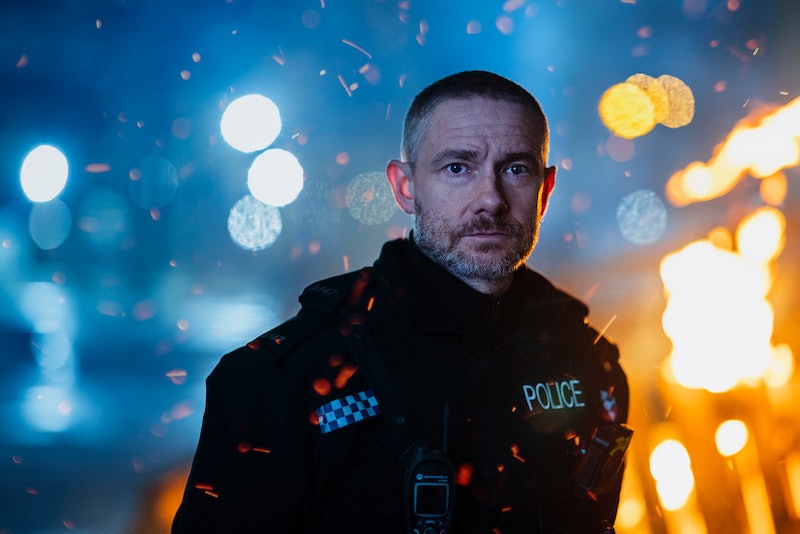 Penned by real-life ex-police officer Tony Schumacher, the BBC’s The Responder follows a Liverpudlian officer as he navigates the difficult and hilarious elements of his career, as well as his own mental health and struggling marriage. The cast of the show is led by Martin Freeman, and has been renewed for a second series. If you’re looking forward to the show’s next chapter, here’s everything you need to know about The Responder Season 2.

Per Radio Times, the plot of The Responder Season 2 is also yet to be announced. Although we do know that filming will once again take place in and around Liverpool, and Tony Schumacher will return to write the scripts. Martin Freeman is on-board, too.

The show’s first run was based on the life of ex-police officer Schumacher, and follows the story of a Liverpool-based first responder named Chris over six night shifts, during which he balances the ups and downs of his job.

A BBC synopsis described Chris as a “crisis-stricken, morally compromised, unconventional urgent response officer” who tries to “keep his head above water both personally and professionally” whilst taking on a new rookie partner named Rachel. However, “both soon discover that survival in this high pressure, relentless, night-time world will depend on them either helping or destroying each other.”

The cast of The Responder Season 1 was led by Martin Freeman (The Hobbit, Fargo, Sherlock) as first responder police officer Chris. As Radio Times reports, Freeman was joined in the BBC series by Adelayo Adedayo (The Capture) as Rachel, Ian Hart (The Terror), and MyAnna Buring (The Salisbury Poisonings), among others.

Speaking of the series, show writer Schumacher said he felt “incredibly fortunate to be writing for a cast as amazing as the one we've assembled,” describing the opportunity to work on The Responder as “a writer's dream come true”.

Elsewhere, Executive Producer for the BBC, Mona Qureshi, described the comedy-drama as “a unique take on modern policing.” She continued, “Tony Schumacher gives us in Chris a heartbreakingly honest portrait of a man coming undone by the pressures around him. We’re so excited to see Martin Freeman in this extraordinary role and for Tim Mielants to bring the night streets of Liverpool to vivid life.”

As news of The Responder’s return was only recently announced, a Season 2 air date is yet to be confirmed by the BBC. We will update with any new information once it becomes available.