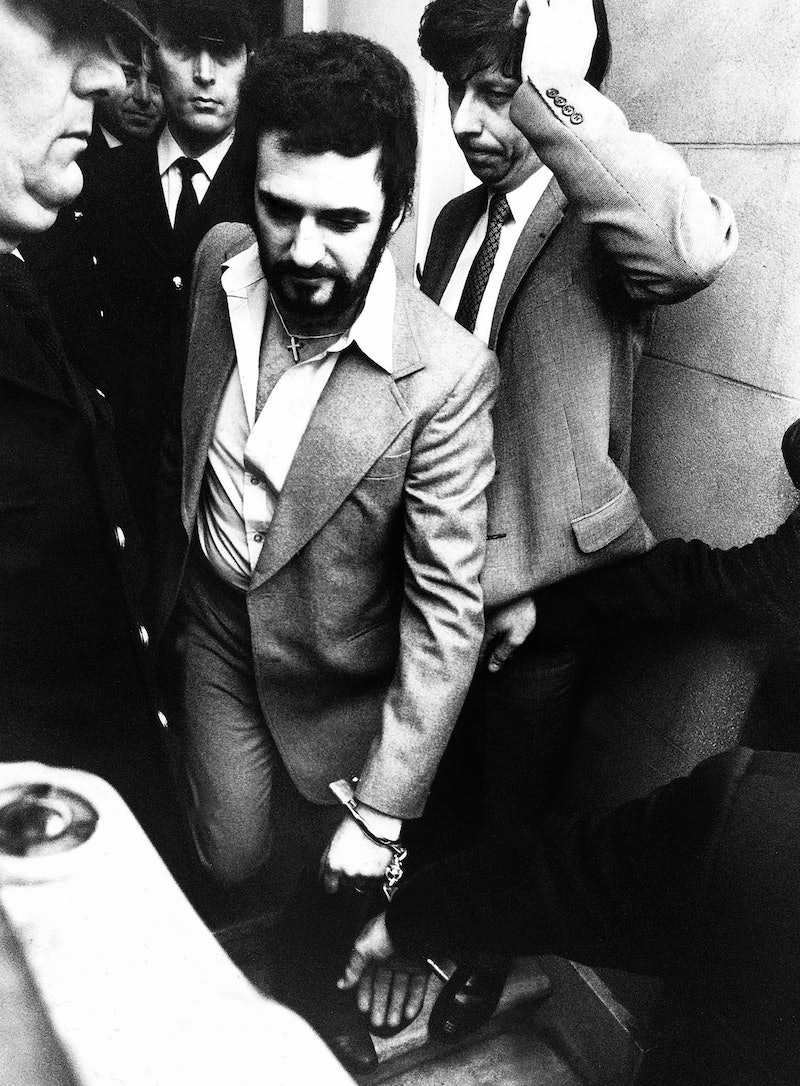 While Jack the Ripper is known as one of the most notorious serial killers of the 1880s, people outside of England are probably less familiar with his 1970s copycat. The Yorkshire Ripper, the subject of Netflix's true crime docuseries The Ripper, terrorized women in the north of England from 1975 to 1980. It was only after he killed at least 13 women that police were finally able to capture him and reveal the Yorkshire Ripper's true identity: Peter Sutcliffe.

Per The Washington Post, Sutcliffe was born in 1946 in Bingley, England. He quit school at 15 and worked numerous menial jobs before becoming a gravedigger and a truck driver. During this time, he developed a deep hatred for women. His attacks began in July 1975 when he hammered and slashed Wilma McCann in the town of Keighley. A month later, he struck again using the same method in a nearby town.

It wasn't long before a pattern emerged, and Sutcliffe's notoriety grew. He was soon dubbed the new Ripper, as he seemed to be drawing inspiration from the original serial killer. As crime historian and tour guide Richard C. Cobb explained on the Jack the Ripper tour site, both men attacked women in low-income areas where people were more likely to turn a blind eye. Both killers would only operate on weekends, and they'd attack suddenly and savagely, often mutilating the lower abdomen. Both men almost always left their victims outdoors, along with a trail of clues for police to find.

As The Ripper explores, though, comparing the two serial killers ended up being a major mistake that hampered police investigations for years. Jack the Ripper exclusively targeted sex workers, and so the 1970s police officers were overly invested in finding a perpetrator who only killed sex workers. Per The Guardian, for years, authorities failed to listen to the victims who survived Sutcliffe's attacks because they weren't sex workers and "didn’t fit with the police’s preconceived idea about who they were looking for." Calling him the Yorkshire Ripper may have been a convenient way to identify him to the press, but wholly misunderstanding Sutcliffe's motivations and misogyny allowed him to evade capture for years.

"It was just a miracle they did not apprehend me earlier — they had all the facts,” Sutcliffe later said, per The Washington Post. He was eventually captured on May 22, 1981, and convicted of 13 counts of murder and seven counts of attempted murder. Sutcliffe died of coronavirus on Nov. 13 at the University Hospital of North Durham, a few miles from the prison where he was serving a life sentence.

According to The Daily Mail, Chief Constable John Robins later apologized for how they mishandled the case and made Sutcliffe into a larger-than-life figure. "On behalf of West Yorkshire Police, I apologize for the additional distress and anxiety caused to all relatives by the language, tone, and terminology used by senior officers at the time in relation to Peter Sutcliffe's victims," Robins said. "Such language and attitudes may have reflected wider societal attitudes of the day, but it was as wrong then as it is now."

But the fight against the Yorkshire Ripper name continues. Already, The Ripper's subjects have taken issue with the title being used in conjunction with Sutcliffe once again. Richard McCann is Wilma McCann's son, and he told The Daily Mail he would have never participated in the project if he'd known they were going to call it The Ripper. (Richard claimed the production team initially told him it was called Once Upon A Time in Yorkshire.) "It mythologizes him and almost makes him a larger than life character and I wonder whether or not that actually inspired him to go and do more because, 'Oh I've got this term now, I've got a brand,'" he explained. "It's so disappointing that we are here it over and over again, possibly inspiring the next serial killer."