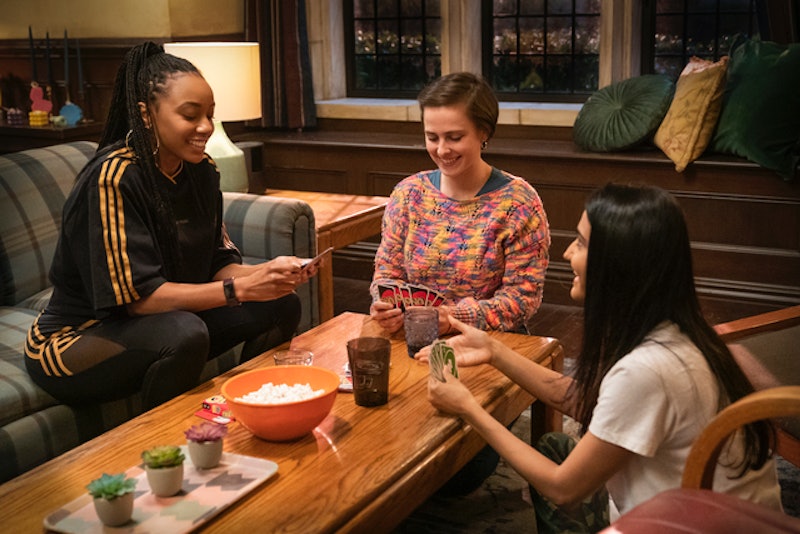 Mindy Kaling is graduating from high school and heading off to college — or at least, her characters are. Her new HBO max show, The Sex Lives of College Girls, follows four freshman girls at Essex College, a prestigious (and fictional) New England school. Together, they navigate the joys, pitfalls, and utter embarrassments of dating and sex while trying to discern their broader place in the world.

Though some of the cast members have a few previous credits to their names, many of them are newcomers stepping into their first major roles. Get to know them below.

Pauline Chalamet — yes, Timothée’s older sister — stars as Kimberly, a caring and ambitious high school valedictorian who grew up in a humble Arizona suburb. Kimberly may be ready for long nights spent studying in the library, but she’s less prepared for the Essex College social scene.

Chalamet, who’s 29, has primarily appeared in French short films and television shows. She also wrote and directed a few shorts of her own, and has a background in dance, having attended the School of American Ballet as a kid. She had episodic roles in One Life to Live and Royal Pains but didn’t land her first big part until 2020, when she appeared in Judd Apatow’s film The King of Staten Island. Sex Lives of College Girls marks her first starring role.

Amrit Kaur plays Bela, a comedy-loving New Jersey native who identifies as “extremely sex-positive” — despite her limited sexual experience. Prior to Sex Lives of College Girls, Kaur had small roles in television shows including Kim’s Convenience and The Bold Type, and was in the main cast of the Canadian television series The D Cut.

Rapp, an actor and singer, will make her television debut as Leighton, a fourth-generation legacy student from a rich and secretly Republican family on the Upper East Side. Leighton doesn't make the best first impression on her roommates, who find her “blunt, judgmental, and entitled,” and is deeply guarded about her personal life.

The 21-year-old Rapp got her start in musical theater. She won Best Performance by an Actress at the 2018 National High School Musical Theatre Awards for her performance as Sandra in her North Carolina high school’s production of Big Fish. In 2019, she took over the role of Regina George in the Broadway production of Mean Girls.

Whitney is the soon-to-be star of the university’s soccer team and daughter of the most powerful Black senator in the country. She’s played by Alyah Chanelle Scott in her first TV role. Like Rapp, Scott comes from a theater background, having portrayed Nabulungi in the national tour of The Book of Mormon.

After a handful of parts on shows including Gotham and Younger and a starring role in the film Good Boys, actor Midori Francis landed her breakout role as Lily in Netflix’s Dash & Lily. More recently, she appeared in the web series The Birch and the Netflix film Afterlife of the Party.

Gavin Leatherwood is best known for playing Nicholas Scratch in the Netflix series Chilling Adventures of Sabrina. Additionally, he’s had small roles on Grown-ish, NCIS, and My Dead Ex, as well as the film When Today Ends. His Sex Lives character, Nico, is the brother of Leighton and a potential love interest for Kimberly.

Actor Christopher Meyer’s extensive filmography includes recurring roles on series including Wayward Pines, Tell Me A Story, The Affair, The Fosters, NCIS: New Orleans, and Wayward Pines. He also appeared in the 2020 Netflix film All Day and a Night.

Prior to being cast in Sex Lives of College Girls, Lauren Lolo Spencer was nominated for a Film Independent Spirit Award for her performance in the 2019 film Give Me Liberty, which premiered at both Sundance and Cannes Film Festivals.

Renika Williams has a background in theater. She had an off-broadway run in All the Natalie Portmans and roles in the productions Mud Row and The Climb. She also appeared in Season 2 of Modern Love.