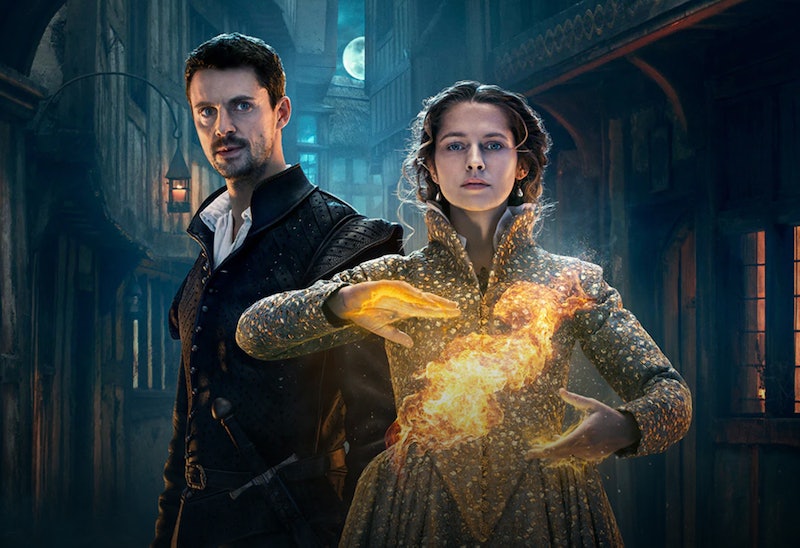 Like a lot of great fantasy dramas, A Discovery Of Witches is based on a series of books — The All Souls Trilogy by Deborah Harkness. The first of the series is the title of the show but the second book gives a hint of some potential spoilers. So what does The Shadow Of Night ending tell us about what's in store for Series 2 of the TV adaptation?

Well, the first season was fairly true to the first novel so one might as well go on and assume that what comes next for our adventurous witch and vampire duo is just as exciting.

But first a quick recap of Series 1: our protagonist Diana decides to leave her witchiness and magic-filled heritage behind in search of an academic career, namely as a historian. But not at any old institution. She starts off at Yale before popping over to Oxford for a little bit. In the process she finds a mysterious old book of magic, a hunky vampire (Matthew), and more drama than you could shake a wand at. Anyway, this magic meddler gets herself kidnapped by baddies but still manages to frees herself. She also somehow ends up in Elizabethan London. Sorry, what?

Shadow Of Night gets right to business, picking up where we left Matthew and Diana — among the cesspits of Elizabethan London. You'd think that the chaos of learning to deal with her powers, her sexy but essentially evil partner, and grappling with the Ashmole mystery would be more than enough for our gal to deal with. But nope, somehow she ends up in even hotter water.

Cue poor Diana finding herself in the swirling madness of the darkest magic and even witch hunts. Also, a lot of Matthew's supposed friends are kind of evil and not ones to be keeping in touch with. After Diana manages to learn more about her powers, the pair eventually track down the Ashmole manuscript and get back to modern times.

Gawd that sounds stressful but also seriously gripping and fun to watch, am I right? We’ll have to wait to see whether Series 2 of the TV adaptation will follow the second book as closely as the first.

A Discovery of Witches is returning to Sky One on Jan. 8 and will also be available on Now TV.

This article was originally published on November 1, 2018