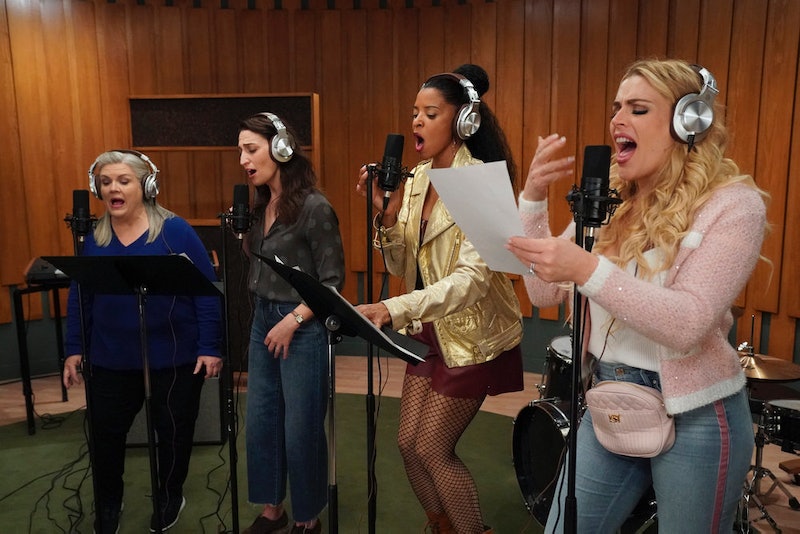 Should you find yourself unable to get ‘90s-style jams like “Famous 5eva” out of your head, the songs in Girls5eva will all be on an accompanying soundtrack album, Billboard revealed on May 3. Fans of the Peacock musical comedy series won’t have to wait to stream or purchase the songs from cast members Sara Bareilles, Renée Elise Goldsberry, Busy Philipps and Paula Pell, either: Epic Records is dropping the album on May 6, the same day Girls5eva premieres on Peacock.

As an added gift, Bareilles penned a new song called “4 Stars,” which appears along with her character’s solo, “I’m Afraid (Dawn’s Songs of Fears),” for the project. “I wrote the song “4 Stars” as I got to know the characters of the other women,” the Grammy winner explained in a “Behind the Music” video from the NBC streaming service. “Writing that song towards them and giving their inner worlds a place to sing and something to say was really really exciting.”

Goldsberry, who previously won a Tony Award for originating the role of Angelica Schuyler in Hamilton, added that she cried the first time she heard Bareilles’ demo of “4 Stars.” The actor described the track as a “perfect pop song about the beauty of being yourself and not being perfect, for any women, but in particular, this very strange group of women.”

Jeff Richmond — who serves as an executive producer for the Meredith Scardino-created series, along with Tina Fey, Robert Carlock, David Miner, Eric Gurian — also composed the soundtrack. “The musical style that we’re approaching in Girls5eva is all the stuff from the late 1990s when girl groups were all the fun of synths [and] dance beats,” Richmond explained in Peacock’s BTS video. Fey, for her part, called the group’s first hit, “Famous 5eva,” an “earworm,” while Scardino joked that though some of the lyrics are “stupid and bad,” the songs are still “really good.”

Check out the full Girls5eva tracklist, courtesy of Billboard, below.

More like this
'That '90s Show' Star Callie Haverda Got Advice From Mila Kunis & Ashton Kutcher
By Brad Witter
Everything To Know About 'The Real Housewives Ultimate Girls Trip' Season 4
By Jake Viswanath
Andy Cohen Apologized To Larsa Pippen After A 'RHOM' Season 5 Reunion Dust-Up
By Brad Witter
Ashton Kutcher Wants Danny Masterson “To Be Found Innocent” In Rape Retrial
By Jake Viswanath
Get Even More From Bustle — Sign Up For The Newsletter
From hair trends to relationship advice, our daily newsletter has everything you need to sound like a person who’s on TikTok, even if you aren’t.