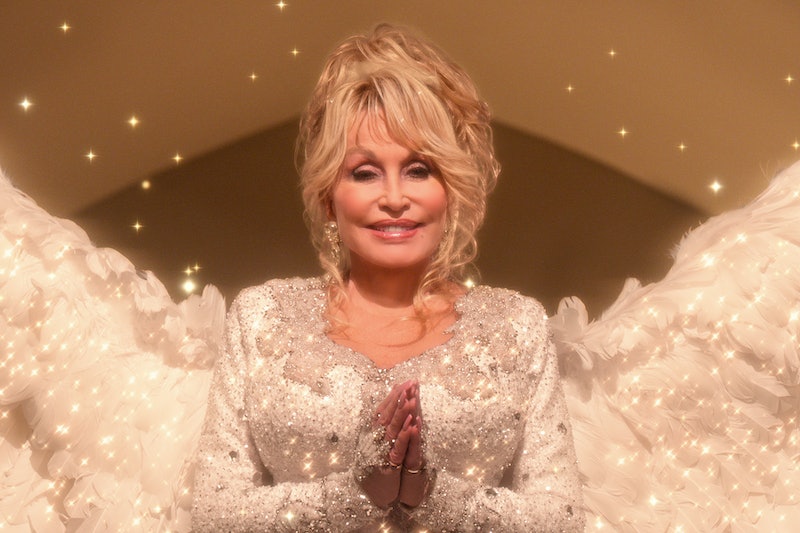 In her 74 years on Earth, country music legend Dolly Parton has written over 3,000 songs. Combine her musical prowess with the ubiquitousness of the Netflix holiday movie and you get Dolly Parton's Christmas on the Square, a new Christmas musical.

Christmas on the Square stars Christine Baranski as Regina Fuller, a wealthy yet cruel woman who returns to her small hometown after her father's death to evict the inhabitants and sell the land to a mall developer. (Yes in this universe, malls are still being built instead of closed down.) To top off her cruelty, she aims to kick them all out of their homes right before Christmas. Parton plays an angel heaven-bent on intervention and through her guidance, Regina listens to the townsfolk's stories, reconnects with an old flame, and starts to have a change of heart.

In addition to Baranski and Parton, the film also stars Jenifer Lewis, Treat Williams, and directed and is choreographed by three-time Emmy and Golden Globe winner Debbie Allen. The musical features 14 original songs written by Parton herself, with musical numbers arranged by Broadway’s Larry Blank. Though there are only 14 songs, they pop up again throughout the movie leading to a whopping 30 song tracklist. Here are all the songs in Dolly Parton's Christmas on the Square, with minor plot spoilers along the way.

In this opening song, the Angel played by Dolly Parton sits in the square dressed as a less fortunate citizen asking for change. She sings about the real spirit of Christmas as a time for caring, giving, singing, joy and love, while the townsfolk sing along, dance, and do various small-town tasks. Baranski's Regina joins in introducing her own desire to get out of the town.

2. "Christmas on the Square"- Ensemble

The jolly opening number kind of blends into this one, the theme song of the movie. Angel continues her hovering commentary and we meet further townspeople, such as Felicity (Jeannie Mason) who works as Regina's assistant but is really an angel in training; Carl (Treat Williams) the owner of the General Store; Mack (Matthew Johnson) owner of The Jolly Lamplighter Bar and his daughter Violet (Selah Kimbro Jones)

3. "Gotta Get Out"- Christine Baranski

In this bit of song that's interspersed between "Christmas Is" and "Christmas on the Square," Baranski's Regina reiterates her desire to sell the town, even though Felicity urges her not to deliver eviction notices right before Christmas.

This tune also pops up a few minutes later sung by the townsfolk as they realize Regina is kicking them out of their home.

Regina starts handing out the eviction notices to the townsfolk rather unapologetically while Felicity runs behind her saying sorry to them all.

Pastor Christian starts a Resist Regina campaign while he and Jenna sing this touching love song to each other, promising that no matter how it turns out with the town or their treatments, they'll weather the storms together.

Lewis plays Margeline, the owner of Le Beauty Shop on the town square and the closest thing Regina has to a friend. In this song, she reveals a little backstory about Regina's past relationship with high school sweetheart Carl and reiterates that what Regina is doing is just mean.

Regina reunites with Carl at his general store and insinuates that his store is really just a second-hand shop for cast-off trinkets, but Carl asserts that he's actually a keeper of memories. The song reiterates how much Regina wants to forget the town and move past her father's death, but Carl tries to remind her that her past and her memories should be treasured.

9. "Everybody Needs an Angel"- Dolly Parton

Angel reveals herself to Regina and sings this ditty while sitting on a floating cloud and wearing a sparkly sequined white gown and 6-inch rhinestone heels.

Angel sings Regina a story of the Scottish Lamplighter, based on the poem by Robert Lewis Stevenson, reminding her of why her father built the town and surrounded the square with old fashioned street lamps.

11. "Wickedest Witch of the Middle"- Ensemble

The townsfolk gather at Pastor Christian's church to formulate their plan to resist Regina.

Pastor Christian and his wife Jenna get a little spiritual and tackle how they have to try and climb their mountain, reach their dreams, and stop Regina from selling the town.

Little Violet is wise for her age, and bonds with Regina while manning her dad's bar while he attends the town meeting. They sing about how life is not a fairy tale while Violet serves Regina whisky. Yes, she is a child.

In this reprise, Regina learns how she possibly altered the course of Violet and Mack's lives and feels extreme regret about how she's treated the town.

Regina has a vision of her father teaching her how to light the street lamps as a young girl.

Felicity is having trouble getting through to Regina, so Angel gives Felicity a pep talk when Felicity tries to quit Regina's "case."

Regina undergoes a brain scan, and while under she remembers her relationship with Carl while the Angel helps her revisit those old memories.

In a flashback, Regina attends her school dance and experiences heartbreak with Carl.

Still flashing back at the dance, Regina, in her grief, dances with another boy which leads to much, much more and Regina's unplanned teenage pregnancy.

Regina realizes why she feels such animosity towards the town and that she can find it in her heart to forgive, love again, and change just like the Angel said.

Mack sings a prayer after Violet gets injured in a car accident.

Regina and Felicity have a little moment together while Regina dwells in her sadness over the baby she gave up for adoption and Carl rejecting her.

23. "When an Angel Knows Your Dreams"- Dolly Parton, Mary Lane Haskell, and Ensemble

Jenna sings a prayer for Violet, the town, her family, and her potential baby, while Angel leads everyone in a vigil for Violet's recovery.

Regina opens her father's old street lamp and discovers who her child is.

Regina joins the townsfolk at the church for Pastor Christian's Christmas Eve service while Dolly sings this one from atop the Christmas tree with giant angel wings.

Regina asks the town for forgiveness, which is basically the theme of the whole film. as Parton told The Christian Post: "There's a lot to be said about forgiveness; it cleans you for other good stuff to come in," Parton said. “If you go around with a bunch of hate and anger and bottled up stuff in you, you can't blossom, as a person, you're not doing yourself any favors or anyone else. It's just so much better to forgive...I really think that that's so important to cleanse your own heart and your own soul, to be able to forgive, and to ask forgiveness. You never should be too proud to ask for forgiveness."

Regina has a change of heart about selling the town, of course, and the townsfolk celebrate. Regina and Carl reconnect and rekindle their romance as the town continues dancing all around them.

Dolly sings this inspiring ballad over the movie's end credits, leading the audience out on a hopeful note.