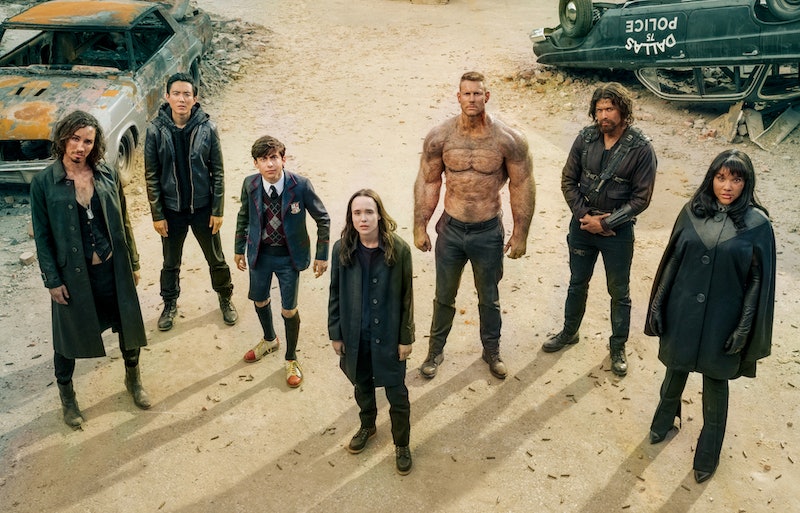 Spoilers ahead for The Umbrella Academy Season 2. The good news is that the Hargreeves are able to avoid not one, but two catastrophic apocalyptic events in The Umbrella Academy Season 2. The bad news is that they significantly alter the timeline in the process. When the siblings return to 2019, both Sir Reginald Hargreeves and Ben are alive and operating something called the Sparrow Academy. Its members are only briefly introduced at the very end of the season, but the Sparrow Academy in the Umbrella Academy comics could offer some clues about what's to come in a potential Season 3.

It’s clear from the onset that the new group is part of the 43 special children born under peculiar circumstances on Oct. 1, 1989. But we don't know much else beyond that. Though shrouded in shadows, they appear to be younger in the show than in the comics, where they're closer in age to the Umbrella Academy. In Volume 3, "Hotel Oblivion," readers learn that Sir Reginald imprisoned some supervillains in a different dimension. When the supervillains wreak havoc after someone releases them, the Umbrella Academy and the Sparrow Academy — referred to only as the Sparrows in the comics — band together to defeat them.

So, could the Umbrella and Sparrow Academy tag team against some supervillains in a potential third season? Comics creator Gerard Way confirmed to Forbes that his next comic, Volume 4, will be called “Sparrow Academy," suggesting fans will learn more about the elusive group in the future. He added that the new comic will deal with “something that had been secret for a long time,” and that the Hargreeves “learn a lot about what was happening behind the scenes, as well as discovering the true nature of some characters that have been with them since the beginning." Volume 4 "finally starts to answer the question, ‘What about the other babies born on that day, in that moment?’” he said.

Of course, this was made apparent after the siblings learned that Lila (newcomer Ritu Arya) had powers, too. Showrunner Steve Blackman also teased how the Sparrows will affect the siblings, should the show be renewed for Season 3. “It’s gonna be very complicated for the Umbrella Academy siblings,” Blackman told Inverse. “They don’t have their home anymore, their father is alive and well, which he shouldn’t be, so, needless to say, there will be more destructive family madness.”