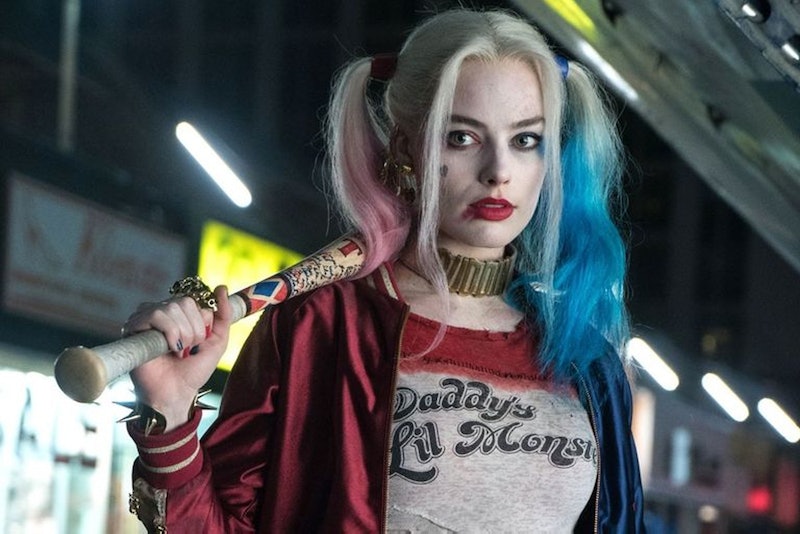 There are some new faces joining the rogue's gallery of Suicide Squad — along with a few returning characters. On Saturday, August 22, DC released the first teaser for James Gunn's The Suicide Squad reboot, which introduced all of the new characters joining Harley Quinn for a brand new adventure. "YOU. ARE. NOT. READY. But here we go anyway!" the movie's official Twitter account wrote, along with the teaser. "Buckle up for the ultimate character reveals from James Gunn's #TheSuicideSquad."

Gunn — who also wrote the new take on the 2016 film — unveiled the massive, star-studded cast as part of DC's Fandome Global Event, with a comics-inspired showcase of each of the actors and the iconic characters they're bringing to the screen. Reprising their roles are Margot Robbie, who played Harley Quinn in both Suicide Squad and 2020's Birds of Prey; Viola Davis as no-nonsense Amanda Waller, Joel Kinnaman as Colonel Rick Flag, and Jai Courtney as Captain Boomerang.

Despite featuring some of the same characters as the 2016 film — which was panned by critics and fans despite its box office success — Gunn's The Suicide Squad isn't a sequel, but a complete reboot. "This one is completely unique," producer Peter Safran said of the film. "This is a gritty, 1970s war movie, combined with the brilliance of James Gunn's characters and comedy."

The new villains joining Gunn's Suicide Squad include Idris Elba as Bloodsport (rather than Deathstroke or Bronze Tiger as previously rumored), Pete Davidson as Black Guard, and John Cena as Peacemaker. "He's like a douchey Captain America," Cena said of his character in a behind-the-scenes feature. "[It] by far the most fun I’ve ever had making a movie," Gunn told fans at the virtual DC Fandome event, adding that it is "unlike any other superhero movie ever made." He also revealed that he was "most excited to write for was Harley Quinn," describing Robbie's character as having a "chaotic, trickster God [element] to her."

That excitement apparently came through on screen, as Robbie herself recently revealed that The Suicide Squad will showcase a "different" side of the iconic villain than her two previous film outings. "I always have such a ball playing Harley Quinn. Every time I’ve done it I’ve learned new things about her, and this movie is no different," the Oscar nominee said on August 20, in response to a fan question on Twitter. "When Harley is put in different group of people and put in a different place you're going to see different aspects of her personality come out depending on how she feels about those people and what she’s doing. You get to see a new side of Harley again and she’s in a new group of people, a big group of people. And it’s insane, as always. It’s crazy fun."

Other than the star-studded cast and all of the "fun" to be had, details about the plot of The Suicide Squad are currently scarce. However, fans will be able to get all of the answers they want on August 6, 2021, when the movie hits theaters. In April, Gunn told fans on Twitter that the film's release hadn't been impacted by the ongoing coronavirus pandemic, as it wrapped filming back in February, before Hollywood sets began shutting down due to safety concerns.

"Right now there’s no reason for #TheSuicideSquad release date to move,” he wrote at the time. "We are on or ahead of schedule. We were extremely fortunate to wrap shooting & set up editing from our homes (due to a post production team & studio with foresight) before quarantine." In the meantime, at least DC fans finally have something to tide them over until its next summer.

More like this
You Definitely Know The Voice Of Shuri's AI In 'Black Panther: Wakanda Forever'
By Brad Witter
'Avatar 2' Now Has A Teaser Trailer & Release Date
By Jack Irvin and Alyssa Lapid
'Wakanda Forever' Is Already Opening Doors For Mabel Cadena
By Grace Wehniainen
The 'Love Actually' Reunion Is Missing A Major Player
By Bustle UK
Get Even More From Bustle — Sign Up For The Newsletter