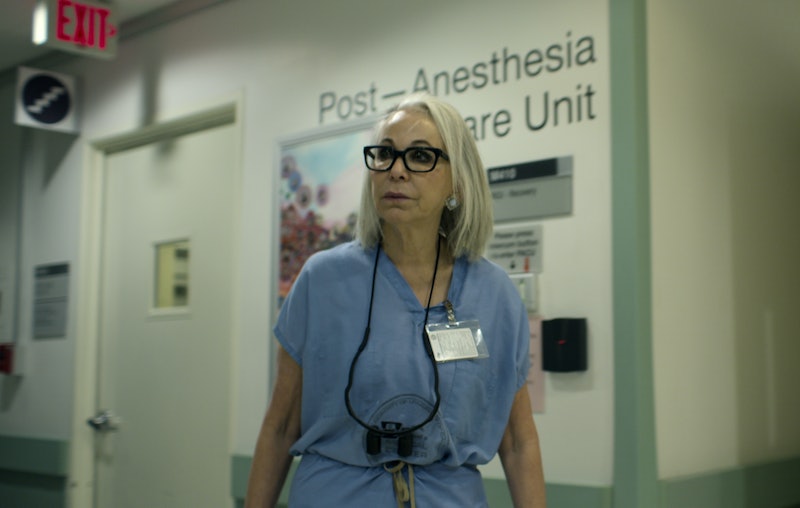 At the hands of brilliant doctors, surgery has grown by leaps and bounds since the days of no anesthesia and unsterile equipment. BBC and Netflix's docuseries The Surgeons Cut showcases four such surgeons, who are pioneering innovative and life-saving procedures in their own fields. As they work in fetal medicine, neurosurgery, transplant surgery, and cardiology, The Surgeons Cut cast helps shape the future of medicine.

"Each surgeon shares the unique story of how they reached the top of their field, from what first sparked their passion, to the obstacles they had to overcome, be it poverty, sexism, racism — or simply where they were born," Executive Producer James Van der Pool said in a press release. "The series reveals a triumph of the human spirit, an endless quest for knowledge, and a fierce devotion to saving human life."

It's bound to be an inspiring and informative watch, so here's what to know about each doctor before tuning in.

Dr. Nancy Ascher has devoted her career to organ transplants and transplant research at the University of California, San Francisco. Per a 2013 UCSF profile, Ascher chose to pursue surgery in 1975, even though the field was predominantly male. Ascher was one of 20 women in her class of 180 in medical school, and after her residency, she became the first woman to perform a liver transplant. She went on to become UCSF's first female chair of the Department of Surgery, making her one of only a handful of women to hold that title in the country.

Today, she continues to work out of UCSF alongside her husband, John Roberts, also a transplant surgeon. Their work is most notable because they perform live liver transplants — a difficult surgery that uses a live person's liver for donation, rather than a cadaver's. (The liver is the only organ that can regenerate.)

"It is a rare operation," Ascher told SFGate. "Because it's dangerous to the donor, and it's highly demanding technically." But it's a vitally important procedure to continue developing. As SFGate pointed out, 1,700 people die each year in the U.S. while waiting for a donor.

Dr. Devi Shetty is a cardiac surgeon and founder of India’s Narayana Health, where he currently serves as the chairman and executive director. He is known for working with any patient in need, and he prioritizes low-cost, accessible health care. Per his Narayana Health bio, he pioneered the concept of "micro health insurance," which pools community resources to help low-income patients pay for expensive treatments. That eventually led to the government implementing the Yeshasvini health insurance model, which provides coverage for low-income, rural farmers.

“To be one of only four surgeons in the entire world featured in this documentary is testament to the unique and ground-breaking nature of Shetty’s approach to medicine," Shomari Scott, the chief business officer at Cayman Island's Narayana Health hospital, told the Loop Cayman news outlet. "Never before has anyone focused on providing the best possible quality at the lowest possible price while saving thousands of lives in the process."

Per The Guardian, Nicolaides is a pioneer in fetoscopic tracheal occlusion (FETO) surgery, a precise operation that addresses CDH. It's a complicated procedure, but by inserting a mini latex balloon in the baby's mouth in utero, the baby's lungs can develop without the organs moving up to squash them. In the most severe cases of CDH, Nicolaides estimates his technique can boost survival rates from 15-20% to about 50%. Since he first experimented with the procedure in 1992, the professor has performed it over 2,000 times.

Dr. Alfredo Quinones-Hinojosa is a neurosurgeon known as Dr. Q to his patients, and his mission is to find a cure for brain cancer. Per The Florida Times Union, Quinones-Hinojosa first came to the U.S. as an undocumented farmworker when he was19. He worked his way up before moving on to a welding job and then night classes at a community college. Later, he attended UC Berkeley and found his calling at Harvard Medical School. Today, he is the chairman of neurologic surgery at the Mayo Clinic in Jacksonville.

It's a journey that he wrote about in his 2011 book, Becoming Dr. Q. Per Mayo Clinic, a film based on the book is currently being developed by Brad Pitt's Plan B Entertainment company. If you want to learn more about his work, Dr. Q's Instagram includes snippets of his lectures and research.