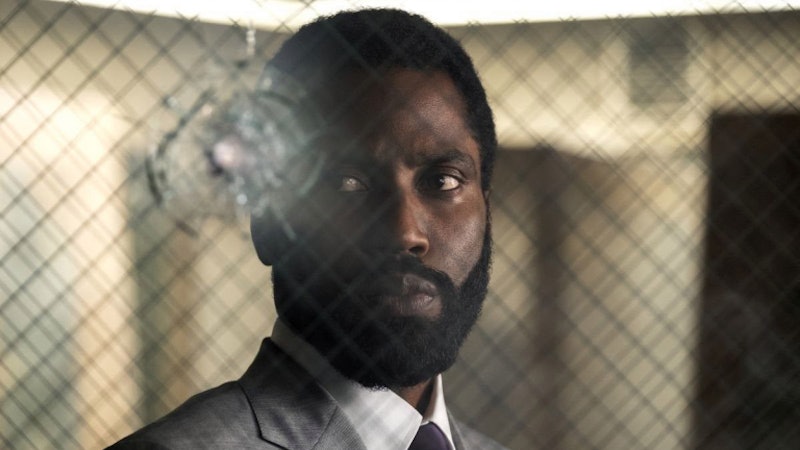 Christopher Nolan is known for his love of plot twists. From his breakout indie film Memento, to the dreamscape diving Inception, or the time-twisting intergalactic saga Interstellar, Nolan scatters his films with Easter eggs — all building up to a mind-bending reveal. And Nolan's latest film, Tenet, is no different. So what happens at the end of Tenet? The following is a breakdown of the film's ending, according to the early reviews for the film listed below.

Major spoilers ahead for Tenet. Tenet stars John David Washington as a character known only as The Protagonist, a CIA agent who finds himself drawn into the world of time inversion. The thriller opens with The Protagonist involved in a highly volatile mission in an opera house, after which he's recruited to a much more complicated mission after witnessing a bullet traveling backward in time.

As Clémence Poésy's scientist explains to him, there are things in the universe that, instead of moving forward in time, move backward in time. This movement is called inversion, and the CIA's fear is that enemies from the future could use an inverted weapon to affect the past. Something like a nuclear weapon launched from the future back into the past would cause an unimaginable catastrophe.

The Protagonist tracks bullets that travel backward in time to an arms dealer named Andrei Sator (Kenneth Branagh) who is trying to get a hold of plutonium. The Protagonist uses Sator's wife Kat (Elizabeth Debicki) to arrange a meeting. (The two are in a very unhappy marriage.) Along the way, The Protagonist teams up with a man named Neil (Robert Pattinson) a member of the Tenet organization who is out to stop Sator's plot.

But as it turns out, Sator isn't working for himself, rather he's working on behalf of people in the future who inhabit a world so completely destroyed that they "have no choice but to turn back."' A scientist of the future created The Algorithm, a device that can reverse the flow of time, but she divided it into nine pieces known as "artifacts" and hid them in the past. The villains are seeking to put together the algorithm in an attempt to essentially reverse time.

Sator inverts himself using a device called a "time stile." As TechRadar explains, "after a character has experienced an event, they can go through a turnstile – the devices that reverse time in the film – and live through an inverted version of the same event, using any new information they've learned to achieve their goal."

As DigitalSpy details, "[Sator] plans to activate the algorithm in the past. He's buried it in his former hometown under several bombs. It seems that when they explode, it'll activate the algorithm buried underneath them, changing the entropy of the world." Sator has also linked the device to his heart rate monitor, so that when he dies, the monitor will drop to zero, setting off the Algorithm, and ending the entire world. And as Kat reveals, Sator is dying of terminal cancer, and believes the world should end when he dies.

So in order to stop Sator, The Protagonist, Neil, and a military-type named Ives (Aaron Taylor-Johnson) have to invert themselves as well and travel backward in time. But here's where the movie gets even more complicated: The Protagonist finds himself reliving fights he's already experienced, except this time from another perspective. He gets into a violent car chase repeated from earlier in the movie, only this time he realizes he was actually on the run from his future self.

The entire climax is a deeply complex and confusing battle confined to a Temporal Pincer Movement, in which half of the characters are moving forward in time and half are moving backward. A Temporal Pincer Movement, GamesRadar explains, "is when one person goes back in time and informs someone else in the past how events will unfold in their future. The non-inverted person can then go 'forward' through time with the knowledge of what's about to happen, thanks to the inverted person." The Protagonist and Ives move as part of the "Red Team" moving forward and Neil moving backward with the "Blue Team," all with 10 minutes to save the world.

The Protagonist tries to stop Neil from going back, but as Neil explains, "What's happened, happened," and actually he's been helping The Protagonist the whole time, since the beginning of the film. "Pattinson's character says to Washington after the mission that this is the beginning of a lifelong friendship for him, but the END of it for Neil," CinemaBlend writes. "This implies that these men have known each other for decades, even though The Protagonist is only meeting and working with Neil for the first time."

In fact, the end of the movie reveals that "it's the Protagonist, then, who will found Tenet in the future," TechRadar explains. "The entire mission – the entire film – is executed by a future version of the Protagonist, using time inversion to achieve the result we see in the film's ending."

More like this
James Cameron May Come To Regret His 'Titanic' Door Experiment
By Stephanie Topacio Long
Taylor Lautner Copped To Finding Jacob "A Little Annoying" In Twilight
By Stephanie Topacio Long
Kukulkan From 'Wakanda Forever' Has A Surprising Connection To Marvel History
By Grace Wehniainen
Reese Witherspoon Confirms This Fan Favorite Will Return For 'Legally Blonde 3'
By Jake Viswanath
Get Even More From Bustle — Sign Up For The Newsletter
From hair trends to relationship advice, our daily newsletter has everything you need to sound like a person who’s on TikTok, even if you aren’t.