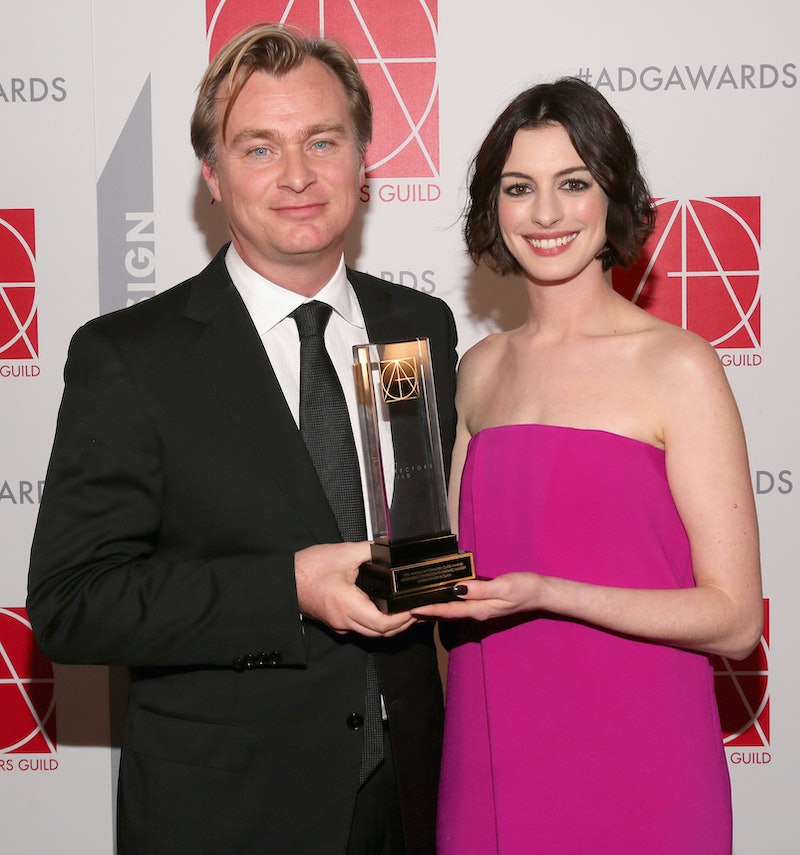 Many directors have been known to be very particular on their sets, but one famed director would like to set the record straight. Christopher Nolan does actually allow chairs on sets — and yes, workers can sit down, in chairs or otherwise, whenever they please. The clarification comes after Anne Hathaway's recent remarks about the director banning chairs from his sets, which sparked a huge influx of both criticism and hilarious memes online.

On Monday, June 29, Variety published an Actors on Actors interview between Hugh Jackman and Hathaway, who revealed that Nolan didn't allow chairs on set because "if you have chairs, people will sit, and if they’re sitting, they’re not working." It may sound frightening to many, but not Hathaway, who worked with Nolan on The Dark Knight Rises and Interstellar. "He has these incredible movies in terms of scope and ambition and technical prowess and emotion," she said. "It always arrives at the end under schedule and under budget. I think he’s onto something with the chair thing."

In response, Nolan's spokesperson issued a statement to IndieWire clarifying that chairs are allowed on sets — but some other things aren't. "For the record, the only things banned from sets are cell phones (not always successfully) and smoking (very successfully)," Nolan's rep said.

His rep went on to explain that there is a chair ban in place, but only for Nolan himself. "The chairs Anne was referring to are the directors chairs clustered around the video monitor, allocated on the basis of hierarchy, not physical need," the rep said. "Chris chooses not to use his but has never banned chairs from the set. Cast and crew can sit wherever and whenever they need and frequently do."

Hathaway is not the only one that has spoken about this bizarre chair habit. Back in 2017, actor Mark Rylance also claimed that Nolan "doesn't like having chairs on set for actors" or even bottles of water, explaining to The Independent that the director was "very particular."

And while the new statement may help squash some of the criticism of Nolan's behavior on set, it sadly also kills the hilarious memes that Twitter users have made with this tidbit of now-false information, taunting Nolan with the mere presense of chairs (the horror!).

Now, let's hope that the only thing that comes out of this debacle is a Nolan-directed movie where chairs become the world's most dangerous predators — starring Hathaway, of course.