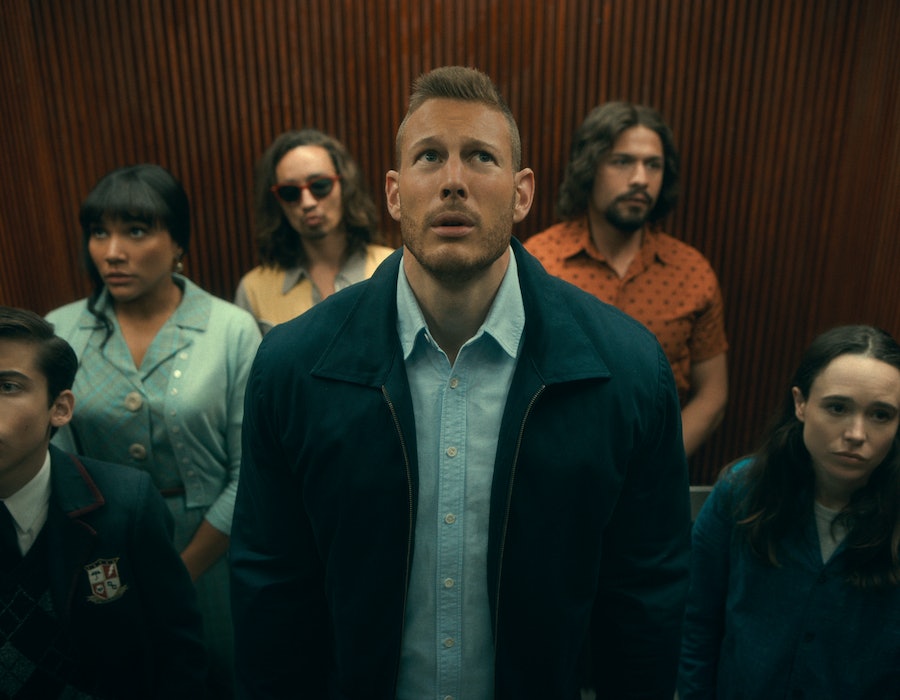 Luther, Diego, Allison, Klaus, Number Five, Ben, and Vanya were unable to prevent the apocalypse in 2019, but as The Umbrella Academy Season 2 trailer indicates, they'll get one more shot at saving the world... in 1960 Dallas. After failing to stop the predicted destruction of the world at the end of Season 1, Number Five used his powers of teleportation and time-traveling capabilities to help him and his siblings escape the fallout. So where exactly did they go? The trailer, which Netflix released on Wednesday, July 8, finally provided some concrete answers to that question.

It seems Number Five ended up sending all of them back in time to 1960, but instead of having several decades between them and the end of the world, they somehow accidentally brought the apocalypse back with them (oops!). That means that they'll have one more chance to prove themselves as the superheroes they were destined to be and stop this catastrophic event "before everyone and everything we know is dead," as Number Five so eloquently puts it. No pressure or anything, though!

To complicate matters even further, the siblings discover that they were scattered across a three-year period, prompting many of them to move on with their lives and create a new identity for themselves, believing that they were the only ones to have survived the time jump. (Spoiler alert — Klaus is now part of a cult and no one should be surprised.) But once another doomsday poses a threat to their new lives, the gang must reunite to stop it in its tracks and return to the present timeline, all while being hunted by Swedish assassins. Sounds easy enough, right?

Along with the return of OG cast members Ellen Page, Tom Hopper, Emmy Raver-Lampman, David Castañeda, Robert Sheehan, Justin H. Min, and Aidan Gallagher as the Umbrella Academy crew, Season 2 will also feature three new additions to the troupe, including Yusuf Gatewood, who plays Raymond, a smart and confident leader; Marin Ireland, who plays Sissy, a fearless Texas mom; and Ritu Arya serving as Lila, who is described as being unpredictable and mischievous.

But as for who is a friend and who is a foe — that's one thing that viewers, much like Sir Reginald’s children, will have to find out for themselves when the series' second installment hits Netflix on Friday, July 31.