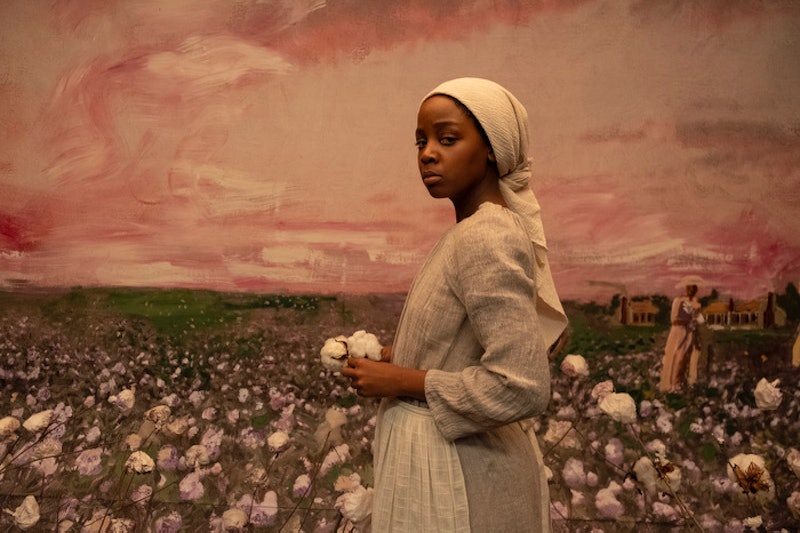 The Underground Railroad follows Cora, a woman born into slavery on a Georgia plantation, as she undertakes an epic journey across the United States in search of her freedom. Cora is accompanied by a number of compatriots — including Lovey, Caesar, and Royal — as she travels from Georgia through South Carolina, North Carolina, Tennessee, Indiana, and beyond. But only one person stays with her for the entire length of her flight: the slave catcher, Ridgeway, who remains on her heels every step of the way.

Here’s what you need to know about fact and fiction in The Underground Railroad:

Let’s start with the Railroad itself.

It’s common knowledge that the real-life Underground Railroad was a network of white and BIPOC abolitionists — some of whom had been previously enslaved themselves — who worked to smuggle runaways from Southern plantations to free states, the Caribbean, Mexico, and Canada. The Railroad’s conductors would hide Black fugitives in “stations” — homes, churches, and businesses — and covertly transport them to the next station as time and safety allowed.

The world’s first subway system, London’s Metropolitan Railway, opened its gates in 1863 — the same year the U.S. Underground Railroad stopped working in secret, and began operating instead as part of the Union war effort. Whitehead’s novel plays with this timeline, turning the real-life Underground Railroad into a literal subway system with routes that connect the southernmost U.S. states to Canada.

Like the real abolitionist network, The Underground Railroad’s eponymous railway operates in secret — away from the watchful eyes of slave catchers. And for its conductors and passengers, Whitehead’s Railroad is just as dangerous for Cora and her friends as the real-life routes were for enslaved people and those who helped them escape.

The slave catcher hired to bring Cora back to the Randall plantation plays a major role in The Underground Railroad. Ridgeway was unable to find Cora’s mother, Mabel, after she fled from Randall, and he treats his mission to recover Cora as a way to make up for his past failings. He’s introduced shortly after Cora and Caesar begin to make their way north, and captures Cora several times over the course of the novel, stopping only when she leaves him to die on an Underground Railroad platform in Indiana.

In reality, mercenary slave catchers like Ridgeway were part of a larger system designed to police Black people, both free and enslaved, in the antebellum United States. That system included organized and armed nightly patrols, as well as legal obligations for white civilians to detain and report any unknown Black person they saw. In addition, the Fugitive Slave Act of 1850 not only forced free states to comply with the work of people like Ridgeway, but it also paid commissioners $10 for every Black person they allowed to be forced into slavery, regardless of whether or not that person was born into bondage.

The slave patrol system eventually led to the post-Civil War development of the Ku Klux Klan — who appear in The Underground Railroad as the night riders Cora encounters in North Carolina — and to the formation of police departments throughout the country.

South Carolina’s history is inextricably linked to the history of slavery in the United States. Charleston, South Carolina was one of the largest hubs of the early American slave trade, which involved kidnapping, buying, and selling both Black and Indigenous people. Charleston’s Old Slave Mart, which is widely believed to be the only existing slave auction site left in the state, was added to the National Register of Historic Places in 1973 and has operated as the Old Slave Mart Museum since 2007.

In December 1860, South Carolina became the first state to secede from the Union. It became one of the founding members of the Confederacy in February 1861, and served as the site of the first battle of the U.S. Civil War in April of that year, when the South Carolina militia fired on Union troops housed at Fort Sumter in the Charleston Harbor.

Anyone who maintains that South Carolina’s reasons for opposing the federal government were not linked to the institution of American slavery need only read this passage from its “Declaration of the Immediate Causes Which Induce and Justify the Secession of South Carolina from the Federal Union,” which states that:

“[Non-slaveholding] States have assume the right of deciding upon the propriety of our domestic institutions; and have denied the rights of property established in fifteen of the States and recognized by the Constitution; they have denounced as sinful the institution of slavery; they have permitted open establishment among them of societies, whose avowed object is to disturb the peace and to eloign the property of the citizens of other States. They have encouraged and assisted thousands of our slaves to leave their homes; and those who remain, have been incited by emissaries, books and pictures to servile insurrection.”

Clearly, Whitehead took a lot of liberties with his depiction of South Carolina in The Underground Railroad. When Cora and Caesar make their first stop on the Railroad, they find themselves in a place where the state government has bought all enslaved persons and given them paying jobs, shelter, and medical care. They’re initially happy in South Carolina, but later learn that the state is committing atrocities against its Black citizens.

Although the living conditions of enslaved persons in the novel’s version of South Carolina aren’t based in reality, all of the crimes the state commits against its Black residents are.

After she begins working, Cora goes shopping for herself and finds that, not only is she paid less than white women working similar jobs, but she’s also charged several times more than white people for the same products. The alternative to going without, which many of her new neighbors take, is to take on debt in the form of “scrip,” an early version of store credit.

A similar kind of scrip appears in South Carolina’s labor history. From the late 19th century through the mid-20th century, textile mills were prominent employers among South Carolina’s working class. Mill workers lived in small houses built near their place of work, and their rent was taken directly out of their pay. What remained was seldom given to them in cash. Instead, mill workers were paid in scrip — store credit — to be used at the company store, which sold necessities and was also owned and stocked by their employers.

Cora decides to leave South Carolina after learning that the state is forcibly sterilizing Black people and using them for medical experimentation. Records show that, between 1938 and 1963, South Carolina doctors forcibly sterilized 277 people, 102 of whom were Black, based on claims of mental illness and “mental deficiency.” The law that made those sterilizations possible remained on the books until 1985, and South Carolina Governor Jim Hodges formally apologized for “decades of suffering and pain caused by eugenics” in 2003.

Unfortunately, this Jim Crow-era eugenics program did not include all of the medical abuses South Carolina perpetrated against Black people. J. Marion Sims, known as the father of modern gynecology and dubbed “South Carolina’s most infamous physician” by The Post and Courier in 2017, experimented on enslaved women in the 1840s, performing up to 30 unanesthetized vaginal surgeries on each of his victims and keeping them at his makeshift hospital for the duration of their treatment, which sometimes lasted for years.

Cora finds a completely different situation in North Carolina, where being Black has become functionally illegal, thanks to both legislative and extralegal measures. She’s forced to hide in a white couple’s attic to avoid detection by night riders — the white proto-Klansmen who patrol the streets looking for Black people to harass, assault, and even murder.

The 1860 census recorded 30,000 free Black people living in North Carolina — a population second only to that of neighboring Virginia, which had 58,000. At the turn of the previous century, North Carolina began charging free Black people £200 each to live in the state, whether they were crossing state lines to settle there or had been manumitted by a white North Carolinian — although the state soon passed sweeping restrictions to control when a slaveholder could free an enslaved person. Those who could not pay risked being re-enslaved if they remained in North Carolina.

In the year following the end of the Civil War, former Confederate states began passing “Black codes”: bundles of legislation that restricted the rights of Black people. Passed in 1866, North Carolina’s Black code “denied blacks the right to vote, serve on juries, and testify against whites in court; provided for the apprenticing of young blacks to their former owners; established capital punishment for blacks convicted of raping white women; attempted to restrict their movement into and out of the state; and prohibited them from owning or carrying firearms or other weapons unless they obtained a license one year before the purchase [sic],” in addition to outlawing interracial marriage.

Similar laws enacted in other southern states, such as Mississippi and South Carolina, required Black people to work — often under conditions nearly indistinguishable from those they endured before the Civil War — or else risk imprisonment. The 13th Amendment allowed — and continues to allow — states to force incarcerated people to work for free. Because states could hire out people within their penal systems, over-policing Black citizens became a financial strategy in many former slave states.

Cora’s experiences in Indiana start out idyllic, as she finds herself in a small community of free Black people, led by a white-passing farmer who helps smooth over relations with the local white population. Tragedy strikes when the commune falls victim to a terrorist attack that ends with the death of Cora’s love interest, Royal, and her subsequent recapture by Ridgeway.

In real life, Indiana abolished slavery in 1820, and later fought for the Union in the Civil War, but the state remained majority-white. This no doubt aided in the formation of the largest state branch of the KKK, the Indiana Klan, which at one time boasted more than a quarter-million members, including much of the state’s legislature.

Although Catholics were the Indiana Klan’s primary target, the KKK were still a white-supremacist organization, even in former Union states. Indiana University’s James H. Madison notes that a Klan member’s so-called 100% American identity hinged on their being a white, native-born, English-speaking Protestants.

When she emerges from the Underground Railroad for the last time, Cora meets Ollie, a Black wagon driver who offers her a ride. Ollie, like many Black Americans in the mid-19th century, is headed to California, which saw the influx of 4,000 Black migrants between 1850 and 1860, 2,000 of whom “settled in San Francisco and Sacramento, creating the first English-speaking Black urban communities in the Far West,” according to In Motion.

The path to the Pacific is a long journey, but for Cora, who has already traveled halfway across the United States, accompanying Ollie could lead to a huge payoff and help her find a permanent community to settle into, after long months on the run.

The Underground Railroad is streaming now on Prime Video.

More like this
Everything To Know About The 'Daisy Jones & The Six' TV Series
By Maxine Harrison and Brad Witter
'Mayfair Witches' Already Changed 2 Major Characters From The Books
By Grace Wehniainen
The Song At The End Of 'The Last Of Us' Ep 1 Has A Deeper Meaning
By Sophie McEvoy
ITV's 'Maternal' Was Inspired By A Very Simple – & Unanswerable – Question
By Maxine Harrison
Get Even More From Bustle — Sign Up For The Newsletter
From hair trends to relationship advice, our daily newsletter has everything you need to sound like a person who’s on TikTok, even if you aren’t.