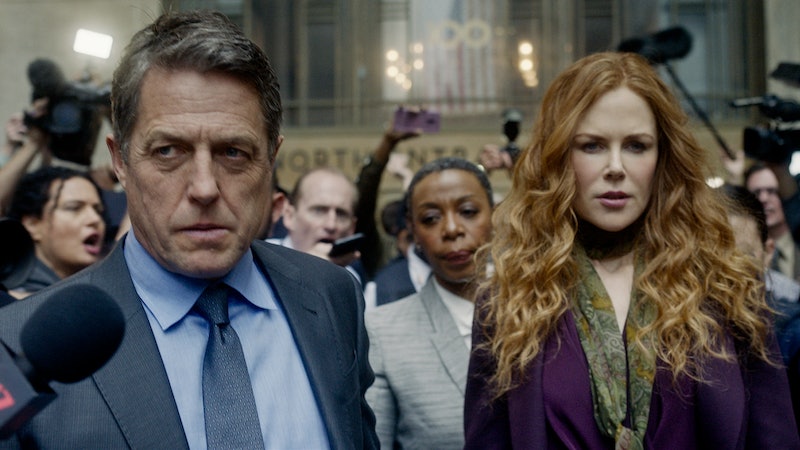 Nicole Kidman is telling even bigger little lies in the trailer for HBO’s The Undoing, an upcoming miniseries from Big Little Lies writer David E. Kelley. The series, based on Jean Hanff Korelitz’s 2014 psychological thriller You Should Have Known, will follow Kidman as Grace Fraser, a successful therapist and soon-to-be author who leads a seemingly idyllic life with a devoted husband, Jonathan (Hugh Grant), and their young son, Henry (Noah Jupe). This all becomes undone when a violent death, a missing husband, and a chain of horrific revelations force her to make a new life for herself. (So, not unlike Celeste's journey in Big Little Lies's two seasons.)

If that all sounds very confounding, that’s because it is. HBO’s trailer for the miniseries doesn't reveal much about what these horrific “revelations” entail, but BLL fans will recognize that any story about a rich, seemingly happy couple will undoubtedly reveal a dark reality. Case in point: the Undoing trailer opens with a community upended after the gruesome discovery of a mother found bludgeoned to death. “It’s what rich, entitled people do when threatened,” a voiceover says. “They conceal the ugly truths to protect themselves.” It appears that Grace is considered a prime suspect, too, or at least complicit with her husband, as she’s ushered through a mob of reporters.

“Murder is ugly business,” a prosecutor says to a jury. “I must warn you, whatever you’ve heard, it’s worse than you think.” The rest of the trailer is interspersed with dramatic clips of the courtroom, violent fits, and the proclamation that “crazy people do crazy things — and they think they can get away with it, because they’re rich.” It’s all very Big Little Lies-esque, if you swap the picturesque California town of Monterey for New York City.

Bird Box’s Susanne Bier directed all six episodes of The Undoing, which was initially slated to debut in April, but was pushed back due to COVID-19. But, barring any extenuating circumstances, the show is expected to premiere Sunday, Oct. 25, at 9 p.m. ET.