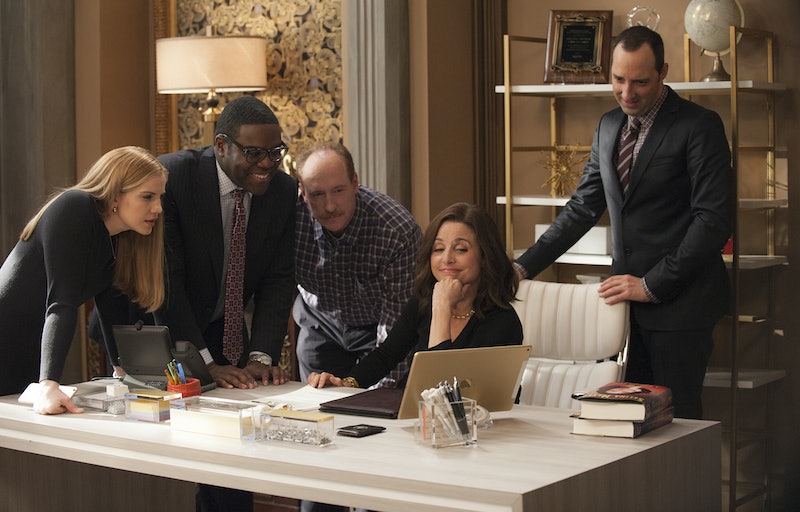 Selina Meyer is hitting the (virtual) campaign trail. On Saturday, the Veep cast announced a reunion event, bringing together cast members, including Julia Louis-Dreyfus, Tony Hale, Clea DuVall, and Anna Chlumsky, to support the Democratic Party of Wisconsin and the Biden-Harris presidential campaign. Veep fans who want to attend the online reunion must contribute to the fundraiser, but the minimum donation appears to be $1 — with most donors opting for $27, according to the event page.

Louis-Dreyfus announced the Veep reunion on Instagram, writing, "’I'm SO excited to announce that we’re doing a #VeepReunion on Oct 4 to benefit the Wisconsin Democratic Party." The post offered a glimpse at some more of the beloved cast who would attend the event, including Matt Walsh, Sam Richardson, and Reid Scott. Daniel Mandel, who was Veep's executive producer and showrunner, will moderate the panel.

Veep, a political satire which starred Louis-Dreyfus as charismatic and ambitious vice president Selina Meyer, premiered in 2012 on HBO, and was on the air for seven years before the finale aired in May of 2019. During its seven-season run the series accrued both mainstream popularity and critical acclaim, taking home 68 Emmy Nominations total, and Louis-Dreyfus winning six wins for Outstanding Lead Actress in A Comedy Series for her work on the show, as per E! News.

On Saturday, Louis-Dreyfus emphasized the real-life political importance of winning Wisconsin for Democrats, saying, "Trump can't win reelection if he doesn't win Wisconsin." She continued, saying that while the Democratic party had built an "unprecedented voter mobilization operation," they would need greater donor support to continue to implement these efforts. "The future of democracy is on the line," she warned.

The star has been very politically active in recent years. In August, Louis-Dreyfus even emceed the final night at the Democratic National Convention, appearing in the lead-up to Vice President Joe Biden accepting the Democratic nomination. On Aug. 20. Louis-Dreyfus also posted a selfie with Biden on Instagram, writing, "Selfie from when we first met. Love this guy and he’s got my vote." (The two go way back. They co-starred in an infamous video for the White House Correspondents' Dinner Video in 2014.)

Efforts to support the Wisconsin Democrats have been in full force, particularly among Hollywood democrats hoping that the swing state will vote blue in the upcoming election. In September, Parks & Recreation also reunited for a one-night event in support, and a virtual Princess Bride event was hosted to support the organization as well, with over 110,000 viewers donating and tuning in to see the cast of the beloved film.