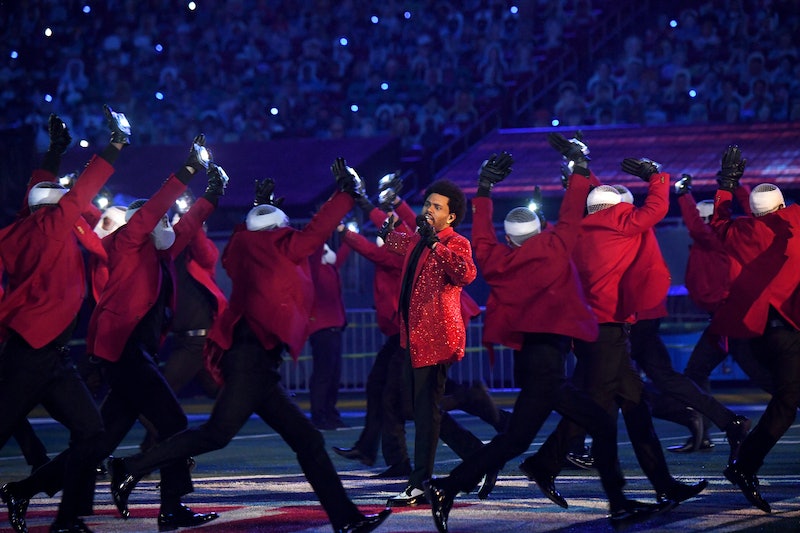 While the Kansas City Chiefs and Tampa Bay Buccaneers faced off for some trophy at Super Bowl LV on Sunday, Feb. 7, Twitter was focused on something much more important: The Weeknd's Super Bowl Halftime memes. The R&B superstar just became the annual sports event's first Canadian solo halftime show headliner, giving a high-intensity 12-minute performance filled with nonstop hits and so many bandaged men.

While The Weeknd may have done the halftime show sans special guests as expected (sorry, Ariana Grande fans), it was still filled with plenty of electrifying moments. The performer turned Raymond James Stadium into his stage, taking over stands, backstage, and the actual football field for renditions of "Starboy," "Can't Feel My Face," and of course, "Blinding Lights."

The latter, which served as his grand finale, would've been a poignant triumph in the wake of his shocking Grammy snubs in November... but then hundreds of bandaged men dressed just like The Weeknd's mysterious After Hours character stormed the stage, freaking out every viewer and supplying endless meme material for Twitter.

Prior to the show, fans got very excited to see what The Weeknd would deliver on stage — and some even gave their dream scenarios.

After making his grand entrance atop a virtual Las Vegas skyline with "Starboy," viewers were immediately onboard with his Halftime Show — but they couldn't help but poke fun at his frenzied performance of "Can't Feel My Face," which gave perhaps the most awkward facial expressions even seen in a Super Bowl halftime show.

However, nothing both impressed and scared Twitter more than the hundreds of dancers who stormed the field dressed in The Weeknd's now-iconic red blazer, their heads completely obscured in bandages, for the "Blinding Lights" finale. As some viewers noted, the horror movie vibes were real.

The dancers also reminded people of some more unlikely things, including the Radio City Rockettes and SpongeBob SquarePants, because all memes lead back to SpongeBob.

Some Twitter users also made COVID-19 mask jokes, because who could resist?

Needless to say, many people are going to have nightmares tonight.