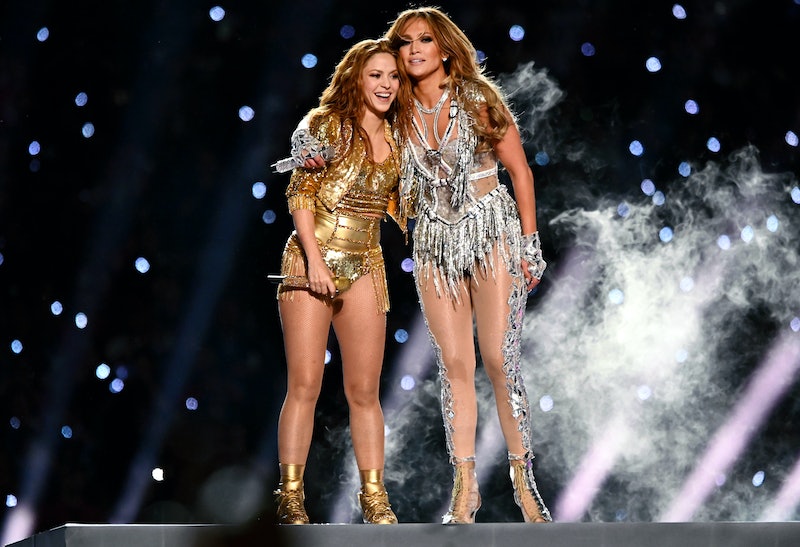 So, Jennifer Lopez and Shakira allowed a sporting event to happen during their joint concert in Miami, Florida this Sunday. As the San Francisco 49ers and the Kansas City Chiefs square off for the coveted Vince Lombardi Trophy, Super Bowl LIV has already yielded one major win: J.Lo and Shakira Super Bowl halftime memes. The Super Bowl halftime performers took the Hard Rock Stadium stage with high-energy performances filled with the ultimate guest stars, but, most importantly, a major Shakira meme moment that has left viewers reeling.

In the 12-minute performance, J.Lo and Shakira performed renditions of "Jenny From the Block," "Get Right," "She Wolf," and "Hips Don't Lie." The performance included duets with Bad Bunny, J. Balvin, and J.Lo's daughter, Emme. Perhaps the most captivating moment, however, was the moment Shakira gave the cameras the ultimate tongue gesture mid-performance. As noted by several Twitter users, the noise is a zaghrouta, a high-pitched sound in Arab culture used to celebrate happy emotions. Given Shakira’s Arab roots, the move makes a lot more sense.

Still, the viral moment has gripped users on Twitter who have hailed it as the ultimate Super Bowl meme. One Twitter user wrote, “If I ain’t seen anything ever that’s more meme-worthy, I give you Shakira tongue lol.” Meanwhile, others invoked the ultimate SpongeBob Squarepants GIF. Explore more of the best Shakira reactions below.

In conversation with Variety last November, J.Lo touched on the cultural impact of headlining the show with Shakira. “I think it’s important in this day and age for two Latin women to be standing on that stage,” Lopez said. “When Latinos are being treated a certain way in this country, or looked at a certain way, [we want] to show that we have a... beautiful culture and worth and value.”

She continued, “We bring something to this country that’s necessary... That night, I want it to be a celebration of who we are. All of us, because we’re in this together.”