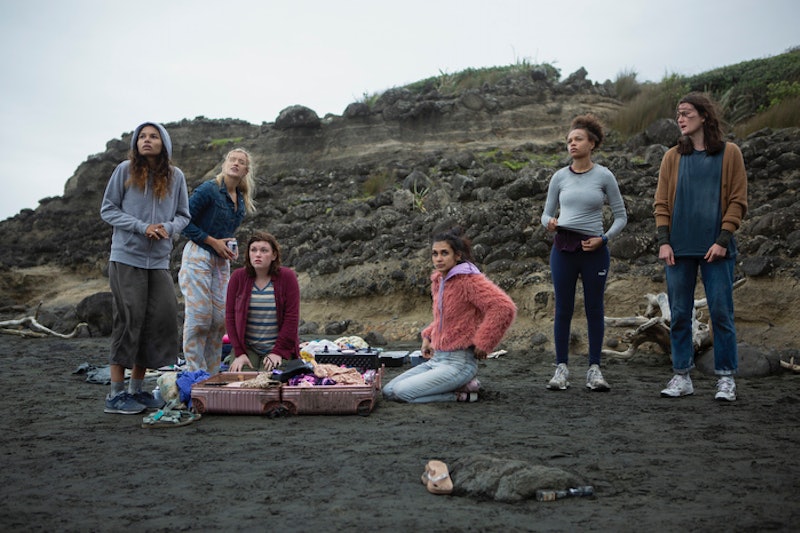 Amazon Prime's new YA series The Wilds ticks a lot of boxes. It has a diverse cast, feminist and LGBTQ+ characters, and it straddles a number of genres, from survival drama to teen soap to coming-of-age story. It also happens to be a pretty good show, according to most critics. Season 1 already set a high standard and laid the groundwork for a loyal fanbase, so it's no wonder The Wilds will return for Season 2.

The series only premiered on Dec. 11, and like most shows, its performance and buzz determined its staying power. Given Amazon's track record, it was initially hard to say how long of a wait it would be before learning The Wilds' fate. For example, its new sci-fi series Upload was renewed just a week after its premiere, while Utopia was canceled two months after its debut. And the new drama Hunters was ultimately renewed for a second season, but not until six months after its debut. So, The Wilds fans wouldn't have been surprised if they had to wait half a year before learning if a second season is on the way or not. However, that didn't happen as Amazon quickly announced its intent to renew the teen drama on Dec. 19.

There are several reasons to be optimistic about The Wilds continuing. The series currently boasts a solid 80% Rotten Tomatoes rating, which is considerably better than Hunters' 64% and is nipping at the heels of Upload's 87%. The show also seemingly fills a gap in Amazon's programming slate, as the streaming network doesn't really offer much YA-targeted content. As Amazon looks to diversify its programming and grow its audience, giving The Wilds another go-round is definitely in line with those goals. Now, we wait for the Season 2 premiere date and plot details.