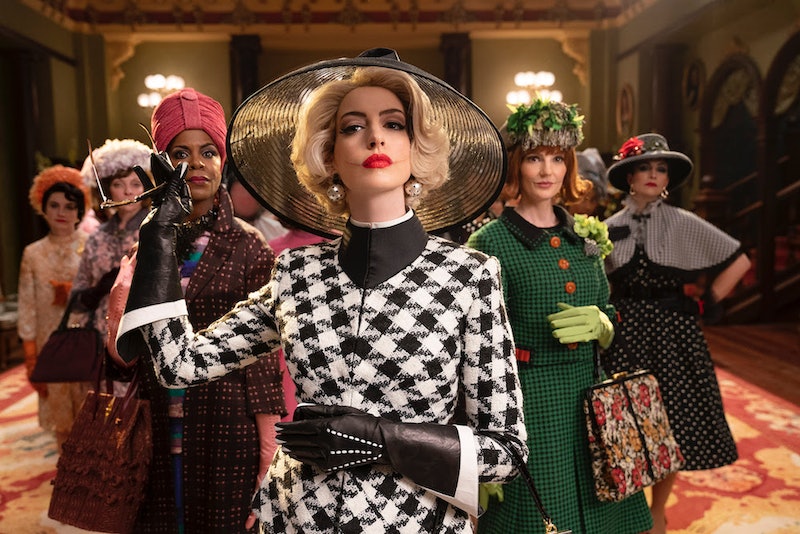 Move aside, Anjelica Huston, there’s a new witch in town. HBO Max debuted the first trailer for The Witches, a new film based on Roald Dahl’s popular children’s book of the same name, and a pseudo reimagining of the famous — and terrifying — 1990 adaptation. Anne Hathaway is taking over for Huston as Grand High Witch, and while the tone of the movie seems a bit lighter than the old version, the actor is just as delightfully wicked. Octavia Spencer and Stanley Tucci round out the cast of The Witches, which had originally been slated for a theatrical release, but will now hit HBO Max just in time for Halloween, on Oct. 22.

As in the original story, The Witches will follow a young orphaned boy (Jahzir Kadeem Bruno) who moves in with his loving grandmother (Spencer) in rural Alabama in late 1967. When the two decide to vacation at a seaside resort, the boy encounters a coven of witches, led by none other than the Grand High Witch (Hathaway). The coven has gathered for a conference and plans to carry out some sinister plans against children everywhere. The film also stars Kristin Chenoweth, Codie-Lei Eastick, and Chris Rock as the narrator slash young boy’s internal monologue.

Hathaway gives Huston a run for her money in the bewitching trailer. There’s no telling if her antagonist will have the same memorable, nightmare-inducing, face-removing scene as her iconic predecessor, but the clip with her wig removed suggests it’s a disturbing possibility. "The Grand High Witch was a total collaboration between costumes, hair and make-up, the writers, my dialect coach, the effects department, stunts, [director] Bob Zemeckis and myself," Hathaway revealed in an interview with People. "She is such a weirdo — so silly and over the top — and everyone had to work together to be on the same page so it felt big and entertaining but never too much." In the same interview, Spencer also teased her own "fun" character, saying, "She's just the type of person you want on your side if you have to battle witches."

The Witches will premiere on HBO Max on Oct. 22, and in theaters worldwide on Oct. 28.

More like this
A New 'And Just Like That' Table Read Pic Confirms A Key Character's Return
By Jack Irvin and Grace Wehniainen
Netflix Reveals First Look At Wednesday In The 'Addams Family' Spinoff Series
By Bustle Editors
24 Years Ago, 'Friends' Dropped Its Most Underrated Ross & Rachel Episode
By Grace Wehniainen
Margot Robbie Breaks Her Silence On *That* Viral 'Barbie' Moment
By Maxine Harrison
Get Even More From Bustle — Sign Up For The Newsletter