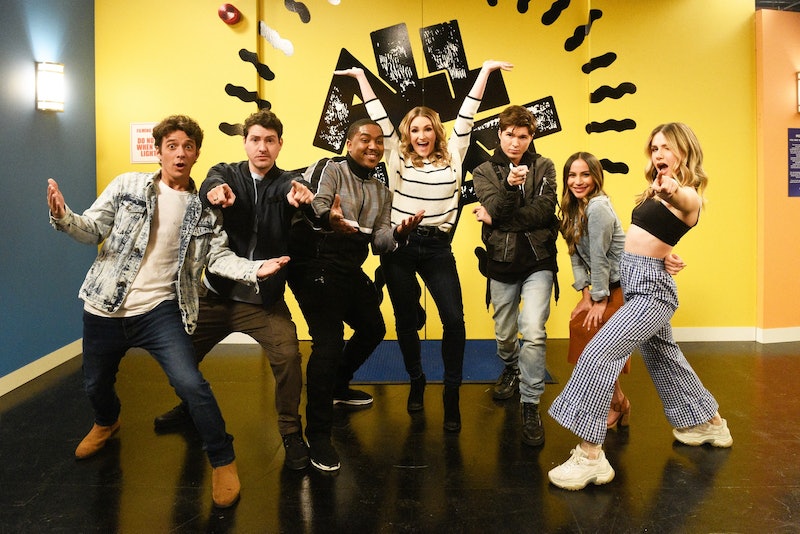 Are you ready ... to return to Pacific Coast Academy? During a recent conversation with E! News, the cast of Zoey 101 revealed they're hoping for a reboot, especially in the wake of their two recent reunions on All That. Though star Jamie Lynn Spears admitted that she would be happy to return to the Nickelodeon sketch show — which she starred on from 2002 to 2004 — anytime, she added that the "ultimate goal" is a full-fledged Zoey 101 revival.

"I've had conversations, and we want to be able to tell everyone's story the best way we can, and finding the right home for it, I think that's the most important part right now," Spears explained, adding that she's been talking to networks about reviving the sitcom since before the pandemic. "But I think that for me, especially during this time off, it's only made me appreciate what I get to do even more," referring to Zoey 101 as her "favorite story" that she's told over the course of her career.

In fact, Spears added, she feels like the show is "not finished" telling its story — particularly when it comes to the relationship of Zoey and her best friend-turned-love interest Chase (Sean Flynn). "There's a lot to still be said, and we'll figure out where they are and how that all goes into play, but I definitely think that there's more to that," she said. "Those two had a strong bond, and I don't think it's finished at all."

Spears has long been open about her desire to star in a Zoey 101 reboot, with TMZ reporting in July 2019 that the actor and mother of two had pitched a reboot to Nickelodeon that would follow Zoey as a 28-year-old in Southern California with a “couple of kids in the mix.” Though she debunked those reports at the time, by May 2020, Spears revealed that she was finally talking to executives about a reboot, although she wasn't sure that the potential, grown-up revival would find its home on Nickelodeon.

"Everything and anything is on the table, whether that's a movie or a series,” Spears told The Hollywood Reporter. “We couldn't do it justice by putting it back on Nickelodeon because our fanbase has grown into young adults like me, 29 or around the same age. We want to tell stories about where the characters are now. We want to connect with the fans and touch on topics that are impacting millennials, so it would have to be aged up and be more mature."

Explaining where she envisioned all of the show's iconic characters, Spears began by explaining that Zoey is "a boss of some type" and is probably "working in fashion in some capacity." However, she also expressed a desire to "add some depth" to her character, namely through what Spears imagines to be a "tangled love story" with Chase. "I don't think they would have just left PCA and gotten married," she said.

Meanwhile, Spears revealed that her costars, Erin Sanders and Matthew Underwood, had come up with their own plan for where their respective characters, Quinn and Logan, would be in 2020. "Erin said that Quinn would be running to be the first woman president," Spears revealed. "I could totally see that, because she's a scientist and is so smart. And then Logan would probably be bankrolling her with Daddy's money." Hopefully Spears' vision will finally become a reality sometime soon, for the good of '00s kids everywhere.

More like this
'Friends' Star Maggie Wheeler Offers Support To Matthew Perry After Reading His Memoir
By Alyssa Lapid
Anne Hathaway Shared A "Thrilling" 'Princess Diaries 3' Update
By Darshita Goyal
This 'Gossip Girl' Wardrobe Error Has Gone Viral On TikTok
By Alyssa Lapid
The 'Scream 6' Trailer Shows Off Hayden Panettiere's Return & Ghostface In NYC
By Jack Irvin and Jake Viswanath
Get Even More From Bustle — Sign Up For The Newsletter
From hair trends to relationship advice, our daily newsletter has everything you need to sound like a person who’s on TikTok, even if you aren’t.