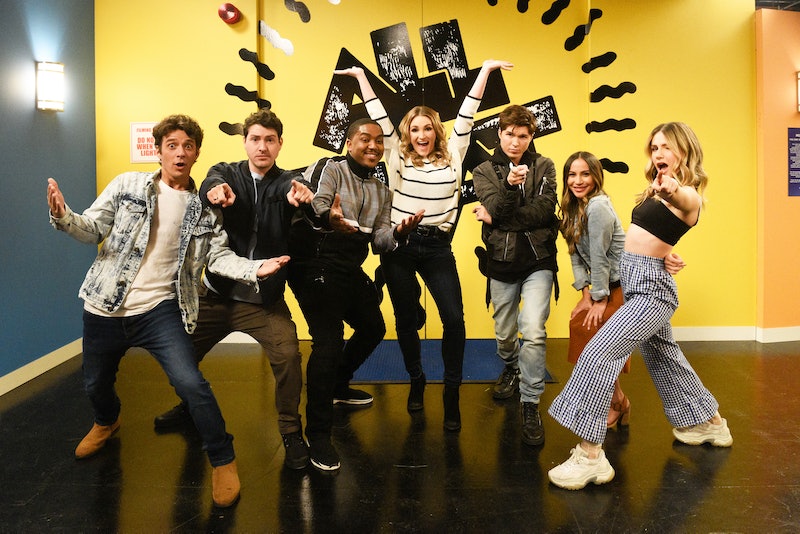 Forget reboots, Nickelodeon just pulled off the ultimate nostalgic event: on Thursday, the network announced the Zoey 101 cast is set to reunite for a special episode of Nickelodeon's All That revival in 2020. And that's not all, the sketch will see Jamie Lynn Spears reviving her All That character, Thelma Stump, the 80-year-old, bacon-loving security guard. Spears as Stump will be blocking the cast of Zoey 101 and All That from entering the building with her trademark sass. Here's hoping someone had the forethought to stuff their pockets full of bacon to bribe the ornery guard, or the whole show will have to take place outside the studio's doors.

In addition to Spears, the rest of the Zoey 101 gang will be stopping by, too. Fans can expect to see Paul Butcher, Sean Flynn, Kristin Herrera, Chris Massey, Erin Sanders, and Matthew Underwood join the 28-year-old on All That. As recently as July, a source told Us Weekly that Spears had met with Nickelodeon about a possible revival, "but the talks have been very preliminary and nothing is set in stone." And while it seems a full-blown reboot isn't in the works just yet, an All That/Zoey 101 crossover is the next best thing.

Shortly after the news broke, Spears shared a photo from the upcoming special on Instagram with the caption, "Surprise!! All That... and a little more." Meanwhile, the actor's Zoey 101 co-star Butcher shared the same photo with a caption that seems to tease there's more news to come. "The cast of Zoey 101 is returning to Nickelodeon officially!! See us on "All That" next year.. with more to come." Could a reunion special be in the works as well? Whatever's going on, the cast doesn't appear to be ready to spill all of the beans just yet.

For now, the news that Thelma Stump is returning to All That (even if it's for one night only) is reason enough to get excited. Nickelodeon's official press release revealed the sketch was filmed in Los Angeles, on Thursday, Nov. 21, and the "Thelma Stump" episode will air in early 2020.

Attentive fans likely noticed that Spears teased the news of Stump's return six days ago when she posted a page from her All That script on Instagram. The actor blocked out all of the lines except: "Gimme the bacon!" For the 28-year-old star, this reunion is extra special, since it means she gets to return to her two famous Nickelodeon roles at once. Spears starred on All That from 2002-2004, and on Zoey 101 from 2005-2008. In addition to her nostalgic reunions, the Nickelodeon favorite is currently filming her new Netflix series Sweet Magnolias, which marks her return to TV for the first time since Zoey 101 ended.

With Hollywood's obsession with show revivals showing no signs of slowing down, fans probably shouldn't count out a Zoey 101 reboot just yet. But in the meantime, prepare for Spears and her co-stars to serve up some serious nostalgia with their All That guest appearance in 2020.