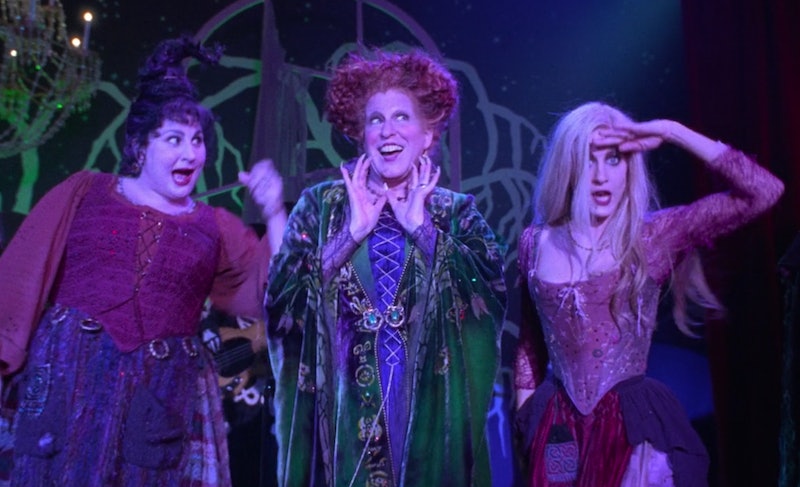 The Sanderson sisters will be resurrected once again: Bette Midler is hosting a Hocus Pocus reunion with Sarah Jessica Parker and Kathy Najimy for a virtual Halloween event. The witch sisters are set to reunite for "In Search of the Sanderson Sisters: A Hocus Pocus Hulaween Takeover” on Oct. 30, as part of Midler’s annual Hulaween festivities, thrown to benefit her environmental nonprofit organization, the New York Restoration Project. While virtual this year due to the pandemic, NYRP promises to brew up “the hottest pandemic-safe Halloween event of the year.”

Tickets for the one-hour event cost $10, and the proceeds will benefit the organization’s environmental and social justice work. Once a spot is reserved, a personalized access link will be emailed in advance of the reunion, as well as early-access information about all the Hocus Pocus fun the event has in store leading up to the big night. Fans can also shop for limited-edition Hocus Pocus merchandise on NYRP’s online shop ahead of the event. (Cake pops shaped like the Sanderson sisters’ spell book, anyone?)

The mini reunion comes after the news that a Hocus Pocus sequel is officially happening on Disney+. While none of the original cast has signed on for the second installment, Disney reportedly remains hopeful that Midler, Parker, and Najimy will reprise their roles as the titular witch sisters once again. Hairspray’s Adam Shankman has been tapped to direct.

Midler and Najimy, for their part, expressed excitement about the sequel during last year’s Hulaween gala — and Midler said she hoped to reprise her role as Winifred. "Oh my goodness me. Oh I hope they get to me before I'm a corpse," Midler told Entertainment Tonight. "We wanna fly again. I hope Disney+ is a big success and I hope we get to do it, because [Winifred] is of course one of my favorite characters." Najimy added that she was “happy that it's happening, because the fans are really rabid and they really want it.” She said, “if we're not all available to star in it, I think it would be so great to do a cameo. I think that'd be really fun."

Until all of that comes to fruition, fans can catch Hocus Pocus on Freeform’s annual “31 Nights of Halloween” lineup, set to kick off on the first day of October. Don’t worry about missing it, too, because the classic is on the lineup a whopping 14 times throughout the month.