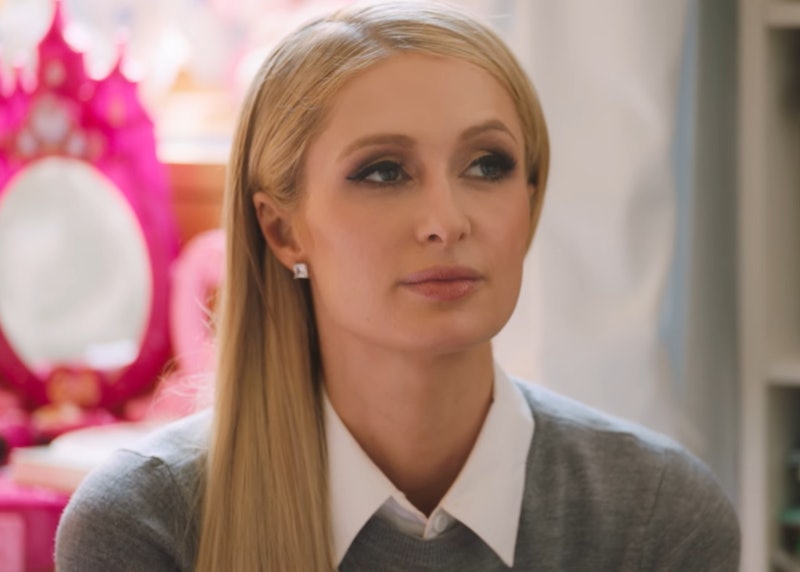 On Sep. 14, everyone will get to see a new side of Paris Hilton as previewed in YouTube's This Is Paris trailer. The beauty mogul is best known for pioneering influencer culture with her Fox reality series The Simple Life, but she's ready to shed the character she played on the show and allow her fans to see the real her for the first time. This Is Paris will be available to stream for free on Hilton's YouTube channel beginning Sep. 14, and the documentary is set to be a must watch for anyone who wants to see the person behind the reality icon.

This Is Paris, directed by Alexandra Dean, was originally set to premiere at the Tribeca Film Festival, which was postponed due to the coronavirus pandemic. But, it seems like Hilton has adapted, choosing to celebrate the premiere on YouTube instead. In the trailer, Hilton becomes visibly emotional when she's questioned about whether or not she's happy. "I'm sorry, I'm like so used to playing a character that it's, like, hard for me to be normal," she says early in the preview. She goes on to say that she's always putting on a "facade" that she's happy, when the truth is she's only happy "sometimes."

"As Paris Hilton confronts her past, this deeply compelling portrait will reveal the woman behind the icon and shed new light on our view of celebrity and the insta-fame culture that Paris helped to create," the official synopsis teases. The film will also see Hilton open about the mental abuse she went through as a young woman at her boarding school in Ohio, as reported by People.

The trailer doesn't go into specifics about what happened to Hilton, but she is seen opening up to her family about the childhood trauma she experienced for the first time. "No one really knows who I am," she says. "Something happened in my childhood that I've never talked about with anyone. I still have nightmares about it."

Seeing Hilton be so candid about her past and the desire to distance herself from the reality TV persona she created might come as a shock to viewers who grew up watching her wild antics in the early '00s. But it sounds like getting ready to share her true self with the world was a liberating experience for the mogul — who has created a beauty line and several perfumes, and who is also a DJ and an artist. One that will allow her to move beyond the legacy of of The Simple Life. "I think when people see this film, they're really going to see a different side to me than they've ever seen before," she said during a March appearance on The View. "Because I honestly didn't even know who I was up until this year. I really learned a lot about myself through this film."

More like this
The 'Scream 6' Trailer Shows Off Hayden Panettiere's Return & Ghostface In NYC
By Jack Irvin and Jake Viswanath
Ashton Kutcher Wants Danny Masterson “To Be Found Innocent” In Rape Retrial
By Jake Viswanath
Hilary Duff Is “Optimistic” About A 'Lizzie McGuire' Reboot
By Alyssa Lapid
At 28, Debra Jo Rupp Was Living A Much Different '70s Show
By Grace Wehniainen
Get Even More From Bustle — Sign Up For The Newsletter
From hair trends to relationship advice, our daily newsletter has everything you need to sound like a person who’s on TikTok, even if you aren’t.