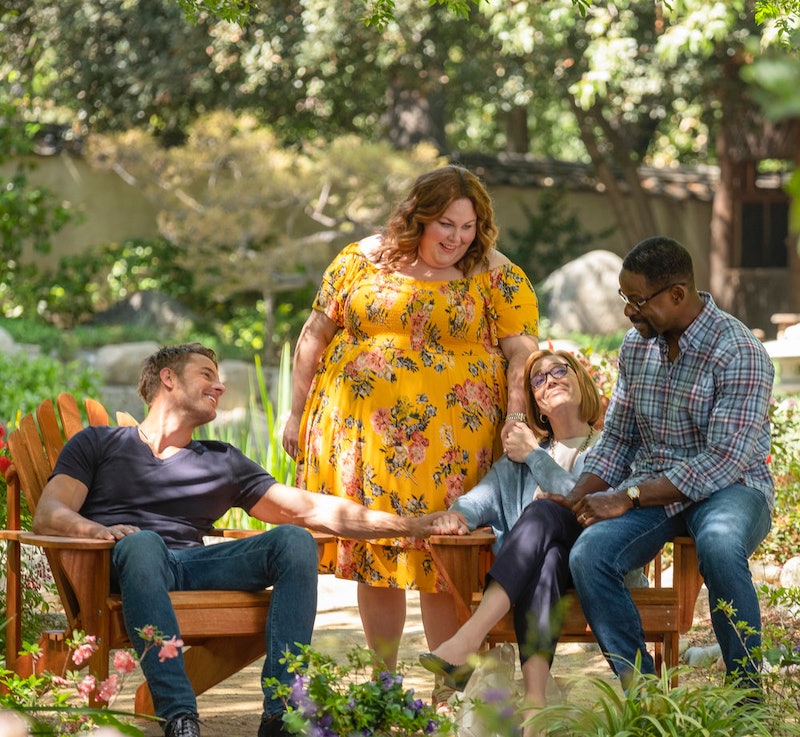 This Is Us Season 5 included several heartbreaks for the Pearsons. While some families expanded, others broke up — all amid Rebecca’s (Mandy Moore) declining health. “Marriages don’t always survive. People don’t live forever,” series creator Dan Fogelman told The Hollywood Reporter following the Season 5 finale. “The balancing act of our show has always been in mixing the tragedies and the heartbreak of life with the joy and the beauty. They have to be able to coexist.”

Indeed, Season 5 ended on a hopeful note. “Everything’s going to be all right,” Rebecca promised Randall (Sterling K. Brown), Kate (Chrissy Metz), and Kevin (Justin Hartley) in her final family speech. How true that is, we’ll find out in This Is Us’ sixth and final season, premiering on Jan. 4. But here’s everything you need to remember in the meantime.

After getting pregnant during a one-night stand with Kevin, Madison (Caitlin Thompson) gave birth to twins Frances and Nicholas (named after “Uncle Nicky”). Kevin then proposed to Madison, wanting to fully commit to his new family. However, they never made it down the aisle. Hours before the ceremony, Madison realized that Kevin didn’t love her. He insisted that their love could grow, but the two realized they weren’t on the same page and called off the wedding. The season finale’s flash-forward hinted Kevin and Madison could get back together. But if nothing else, they seemed to be on friendly terms in the scene, which takes place about five years in the future.

Kate Gets Remarried After Divorcing Toby

Kevin and Madison’s potential reconciliation was greatly overshadowed by the Season 5 cliffhanger, which revealed that Kate marries her co-worker Phillip (Chris Geere) in the future. That leaves Season 6 to fill in a lot of blanks, but makes clear that Kate and Toby (Chris Sullivan) are headed for divorce. (We know that Toby is still alive because he appeared — sans wedding ring — in the 2034 flash-forward scene.)

The revelation was particularly shocking given that Kate and Toby had just adopted baby Hailey, and seemed to have gotten to a good place in their marriage. However, the show had long been planting seeds that the two would break up. In Season 5, Toby lost his job and became a stay-at-home dad while Kate worked at a music school. After Toby received a job offer six hours away in San Francisco, Kate offered to quit the job that she’d come to love so that the family could relocate. Eventually, however, they agreed to have a long-distance marriage for a portion of every week.

After making up with Kevin following their brutal Season 4 argument, Randall spent much of Season 5 on a journey of healing and self-discovery as he examined his racial identity. While continuing his work as a Philadelphia city councilman, Randall traveled to New Orleans with Beth (Susan Kelechi Watson) to learn the truth about his birth mother, Laurel (Jennifer C. Holmes) — who, it turned out, didn’t die when he was a newborn. Laurel’s longtime love, Hai (Vien Hong), explained that she actually died of breast cancer in 2015, and her Louisiana house and land that he’d looked after belongs to Randall now.

Though initially reluctant to tell Rebecca about the trip, Randall eventually showed his adoptive mother photos of Hai and Laurel in the Season 5 finale. The Pearson matriarch tearfully remarked that Randall had Laurel’s eyes. Rebecca also apologized to Randall for not giving him a forum to discuss his birth parents, and the mother-son duo seemed to be back on the same page.

The flash-forward to Kate’s wedding showed Randall in a New Yorker profile dubbing him a “rising star,” but it remains to be seen if that’s due to his work in the political arena. Meanwhile, Beth had to close her dance studio amid the coronavirus pandemic, but the future timeline revealed that the setback won’t end her dream for good.

Rebecca Finally Got Her Dream Home

Rebecca’s Alzheimer’s continued to progress throughout Season 5. She admitted to her kids that she didn’t know how much time she had left, but wanted to make the most of her remaining days. To prevent Kevin from drinking to cope with his failed engagement, Rebecca asked him to build her the house Jack had designed for her before his untimely death. Thanks to time jumps, viewers know that Rebecca will spend her final days in the house where Kevin lives with his children and still-unidentified wife in the future.

Nicky Reconnected With An Old Love

In an episode revealing more of Nicky’s (Griffin Dunne) backstory, viewers learned he’d fallen in love with a woman named Sally (Genevieve Angelson) as a teen. Before their romance could really begin, young Nicky (Michael Angarano) backed out of a road trip they’d planned to California, thus ending their relationship. As an adult, he began looking for Sally online, and by the time Kate and Phillip’s wedding day arrives, he has a wife. But it’s unclear if that wife is Sally or someone else.

Randall & Beth’s Daughters Are Growing Up

In the present timeline, Tess (Eris Baker) began dating after coming out as queer, while Deja’s (Lyric Ross) boyfriend Malik (Asante Blackk) got accepted to Harvard, leaving their relationship in jeopardy. In the later future timeline, viewers learn that Deja, now a medical student, is pregnant. Whether or not Malik is the father, we don’t yet know.

By the end of Season 5, viewers still hadn’t seen Miguel, Kate, or Kevin’s wife. Any of them could have been in the mystery white car that pulled into Kevin’s driveway in one of the final scenes, and Season 6 will surely bring finality and answers.

More like this
'The Crown' Season 6 Has Suspended Filming "Out Of Respect" For The Queen's Death
By Bustle Staff
Netflix Shut Down 'Bridgerton' S3 Rumours About A “Very Dark” Storyline
By Bustle
The 'Gossip Girl' Reboot Creator Is “Looking For A New Home” To Air A Potential Season 3
By Brad Witter
'The Last Of Us' Episode Schedule Competes With The Super Bowl & Oscars
By Brad Witter
Get Even More From Bustle — Sign Up For The Newsletter
From hair trends to relationship advice, our daily newsletter has everything you need to sound like a person who’s on TikTok, even if you aren’t.