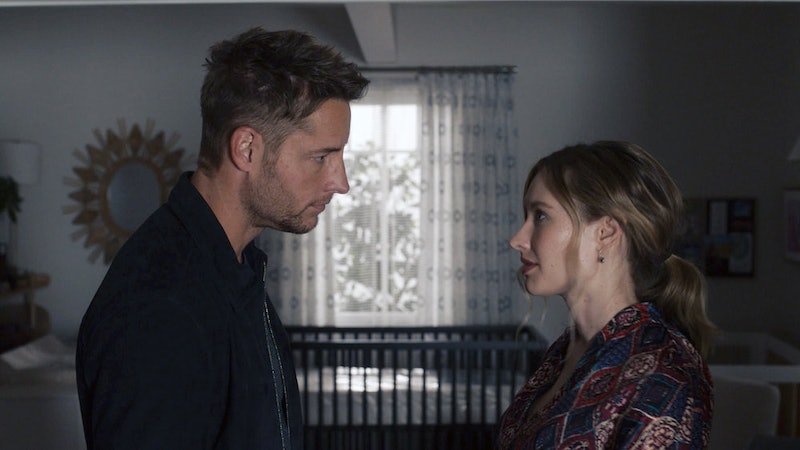 Spoilers ahead for This Is Us Season 5, Episode 15. Kevin and Madison’s wedding may be coming up, but several fans still aren’t convinced that the couple will last long-term — or even make it down the aisle in the first place. Many of those concerns were validated in the May 18 episode, when both Madison and Kevin seemed to have doubts about their relationship. Is it possible that Kadison (Mevin?) aren’t really endgame? These clues seem to hint yes...

One of Madison’s bachelorette party games featured videos of Kevin trying to guess the answers to various questions about her — including what she wants their future together to look like. Instead of answering, Kevin joked that it was a trick question because he never wants to grow old. However, a flashback revealed that he was able to perfectly envision a future with Sophie, so it’s suspicious that he was so evasive when it came up with Madison. She also seemed troubled by the non-answer, playing and re-playing the video while looking increasingly upset.

Kevin’s Not Over Sophie

When Kevin’s ex-wife Sophie called to congratulate him, they were interrupted so Kevin said he would call her back. But at the end of the episode, he deleted her number. The move felt less like an acknowledgement that he’s fully moved on from Sophie and more like he just didn’t want to be tempted to reach back out. He’s trying to 100% commit to Madison, even though his heart seemingly isn’t fully with her.

Madison Could Be A Distraction

Overall, Madison seems more like a rebound relationship for Kevin than anything long-term and serious. Remember in Season 4, when Kevin got his big boy bed and had to give up his sheep mobile? Jack placated him with a stuffed animal tiger by explaining that it’s possible to find new things to love. Is Madison the tiger while Sophie is the sheep — Kevin’s first and truest love?

Let’s also not forget the episode where Kevin’s director said that he changed the movie’s ending in order to create “the ending everyone wants but still won’t see coming.” Perhaps Madison isn’t just a distraction for Kevin, but a distraction for viewers so we don’t see Kevin and Sophie’s reunion coming.

They Never Had A Chance To Date

Madison made a joke in the May 18 episode that she and Kevin never really did things the traditional way, since they started dating only after she was already pregnant. Kevin seems to be trying his hardest to be there for his family, but it could be more out of obligation than love — especially since the two didn’t have a foundation of love before having kids. Nicky voiced the same concern in the May 18 episode. And as actor Justin Hartley put it to TV Line, “I’ve said this before: You can’t really force love. It doesn’t work.”

Madison’s Not In The Flash-Forward

Kevin seems to be married in the flash-forward, since we see him wearing a ring, but we don’t know who he’s married to. Madison hasn’t been seen in the scene yet, which doesn’t mean she’ll never show up. But if she’s married to Kevin and the gathering is happening at Kevin’s house, it’s a bit weird for her to not be there.