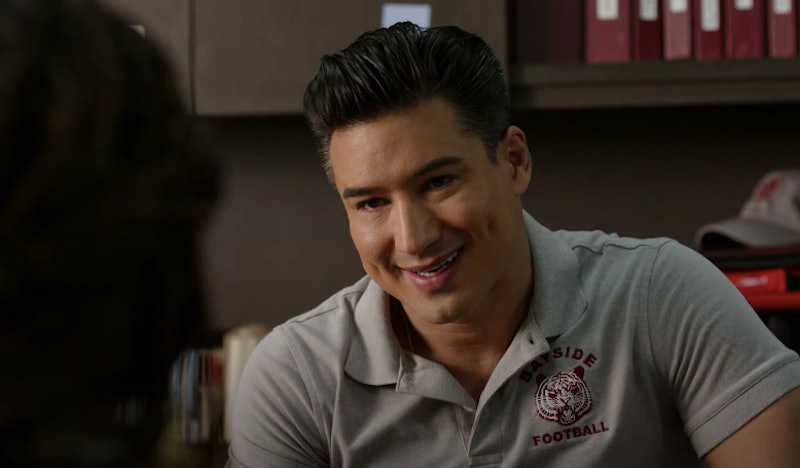 The coronavirus may have put a pause on production, but Peacock's new Saved By The Bell reboot trailer shows the returning cast won't be missing a beat. The teaser, which premiered on Monday, Aug. 10, features original Saved By The Bell stars Elizabeth Berkley and Mario Lopez. And despite it being almost three decades since the original show went off the air in 1993, the stars seem to have had no problem returning to their iconic roles.

In addition to highlighting the return of Jesse Spano and A.C. Slater, this new teaser gives a bit more of an introduction to the new faces at Bayside High, like Mac Morris (Mitchell Hogg), who is Zach and Kelly's son, and Lexi (Josie Totah), a Kardashian-obsessed popular girl. The show takes place after California Governor Zach Morris (yes, really) closes some low-income schools in the state, which winds up adding more diverse students to Bayside, where Slater and Jesse appear to be teaching. The new trailer teases a bit of a culture clash between new kids Daisy (Haskiri Velasquez) and Aisha (Alycia Pascual-Pena) and Bayside's most popular students, but that's also balanced with some pretty epic throwbacks to the original series.

Not only is there some prime A.C. Slater-Jesse Spano flirting going on in this teaser, there's also a great callback that time Jesse got addicted to caffeine pills. "At first, they're so exciting, and then, it gets even more exciting. But after that, it gets so scary. And in the end, you ruin your girl group's shot at a recording contract," she warns Daisy when Mac tries to give her some pills to help her study. Note taken.

Berkley explained why she felt now was the right time to return to her Saved By The Bell roots, speaking at Peacock's TCA press tour event. "There's heart at the core of everything still, which is something I think people loved about it," she told reporters, per Entertainment Tonight. "It can bridge both people that are nostalgic and a new generation." She's not the only original cast member who felt 2020 was the year to bring back the sitcom. In addition to Lopez, fellow O.G. stars Mark-Paul Gosselaar and Tiffani Thiessen are also set to return.

The Saved By The Bell reboot doesn't have an official premiere date yet, but hopefully once filming can resume, it will be online and in fans' homes faster than Jesse can say, "I'm so excited!"