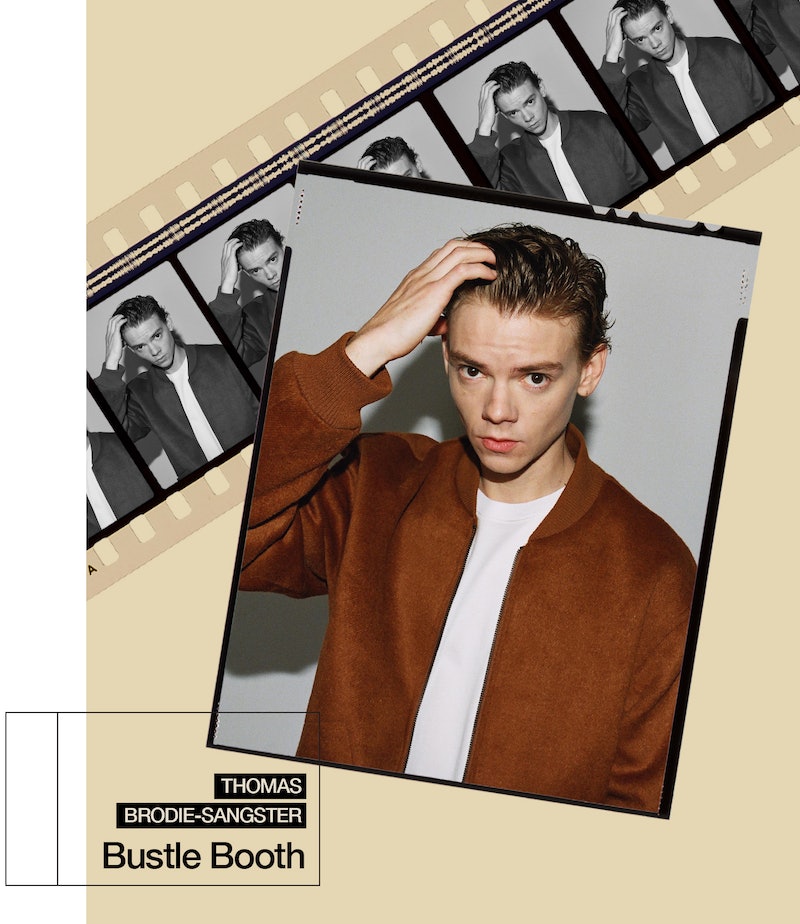 First, let’s address the elephant in the room: Thomas Brodie-Sangster — star of Netflix’s new chess drama The Queen’s Gambit — doesn’t just remind you a lot of the 12-year-old redhead furiously bashing his drum kit to the tune of “All I Want For Christmas Is You” in Love Actually. He actually is the kid from Love Actually, all grown up at 30. And the new role you’ll soon know him for is Benny, a redheaded would-be grandmaster with the chess IQ of Bobby Fischer and the cocksure swagger of an American cowboy. His character wears a ten-gallon hat and carries a knife, for what purpose not even Brodie-Sangster can say. “I don't think he would stab someone in the slightest,” the English actor tells Bustle. “I think that's to sharpen his pencils so he can write down his score line more accurately.”

The limited series is based on Walter Tevis’ beloved 1983 novel of the same name, but Brodie-Sangster hadn’t read it before he signed on to play Benny. Nor was chess, a game he admires more than he plays, at the center of his attraction to the role. “I'm dyslexic and a terrible reader. So I mean, I don't read very much at all. I struggle with scripts even, but I love stories. I love people, and I love what sets us apart. I love what brings us together,” he says. “You end up learning a lot about yourself as well.”

If the characters of The Queen’s Gambit are united by anything beyond a love of chess, it’s their myopic fixation on winning. It’s what variously brings Benny and Beth Harmon (played with a dark bravado by Anya Taylor-Joy) together and keeps them apart. But if Beth’s Achilles’ heel is her obsessiveness, Benny’s might be his vanity. “If this were a golf or tennis tournament we’d be surrounded by reporters as opposed to…whoever these people are,” he complains to Beth as he surveys the dusty Ohio college classroom playing host to the 1967 US Championships.

“He's just kind of looking for that sense of celebrity, which is a means of gratification and justification for what you've chosen to do. And you don't need that,” says Brodie-Sangster, who’s been on the receiving end of the acclaim Benny craves for most of his life now, ever since he first picked up those drum sticks. Then he adds: “But it's nice to have it from time to time.”

London, twice for some reason. They have different temperatures.

Who do you admire most?

I despise karaoke and never willingly step foot into a karaoke bar.

I don't really care what people say about me. It's up to them to form an opinion and it's none of my business to know what it is.

More like this
On 'The Handmaid’s Tale,' Christine Ko Fights Back
By Gretchen Smail
Netflix Reveals First Look At Wednesday In The 'Addams Family' Spinoff Series
By Bustle Editors
What Does Nancy Jo Sales Think Of 'The Real Bling Ring'?
By The Editors
Devi Is Going To Meet A “Smoldering Bad Boy” In ‘Never Have I Ever’ Season 4
By Jack Irvin and Gabrielle Bondi
Get Even More From Bustle — Sign Up For The Newsletter