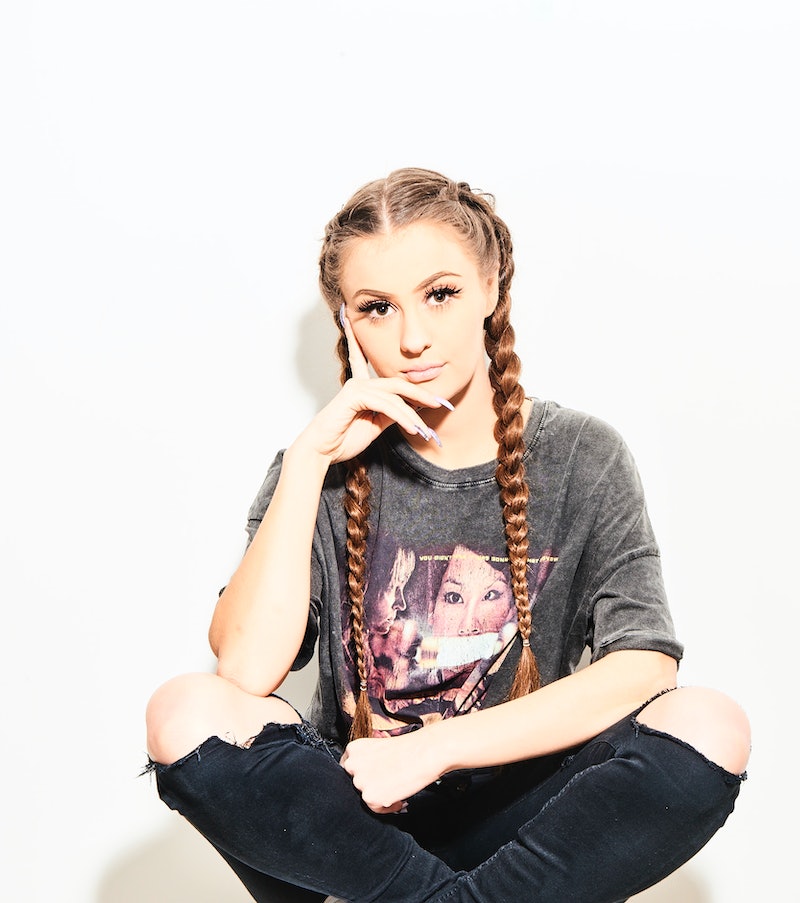 With 16.6 million people following her on TikTok and 1.5 million Instagram followers, Holly H is one of the internet's hottest creators right now. While the Renegade dance trend may be a distance memory to you by now, Holly's not let up on making viral content and keeping her followers laughing. She’s the socially savvy best mate who could take a great OOTD shot for you and get help with all your TikTok glow up vids. However, this hasn’t always been the case.

"When I was younger I didn’t have any social media [that I used] for fun," the 23-year-old star tells me over the phone. "There was a lot of online bullying in my school and I did everything I could to avoid that whole world because it didn’t seem very nice."

Holly started creating videos on Vine when she was 18. Just days before the platform closed down, she hit 100,000 followers. From there, she moved to Musical.ly, which later became TikTok in 2018. It’s her knack for creating funny and relatable content that has seen her following explode over the past five years and land her deals with the likes of Disney and PrettyLittleThing. But not only was TikTok a learning curve for Holly (she had to adapt to a new style of video and a brand new audience), she also had trouble justifying her dedication to the platform to those around her.

"When I was younger, there was a lot of online bullying in my school and I did everything I could to avoid that"

“When I first started, my family absolutely hated it," she says. "They hate it less now and I respect their boundaries. My brother’s still not ok with it but he’s 13 and I think he thinks I’m really uncool.”

In fairness, having a social media sensation for a sibling must take some getting used – but fame hasn’t gone to Holly’s head. She's still wary of how toxic social media can be and makes clear to me that we won't be catching her involved in any influencer beef anytime soon.

She adds: “I used to completely indulge myself in the world of social media and never leave,” she says, “I still spend an excessive amount of time making videos and interacting with my followers but I definitely take a step back now.”

And Holly’s latest campaign – Banter or Bullying? – shines a light on exactly this. She’s working with Instagram and Cybersmile to call out cyberbullying and raise awareness for the tools you can use to protect yourself online during Anti-Bullying Week 2020.

“My entire life is social media and that means my whole life is open to cyberbullying, I’m very aware of it,” Holly explains. Speaking about the tools she uses to protect her wellbeing, she says: “I have a lot of people muted and I use the comment filter to filter out any nasty words or negativity. I’m never going to be able to make everyone like my content and that’s alright but I worry about the people that follow me and see those comments.”

She may have got to grips with the trolls online but that doesn’t mean Holly is exempt from all the pressures of being a social media star. Quite the opposite. Having over 16 million people waiting to see what you’re going to come out with next is no mean feat. “Sometimes I feel like I’m not posting enough and I’ll always be vocal about it and explain why. Usually my followers will tell me I’m being ridiculous and to relax,” she says “they make me feel so much better”

“My entire life is social media and that means my whole life is open to cyberbullying, I’m very aware of it”

And as well as cultivating such a supportive atmosphere on her page, Holly also looks for that in the other people she follows too. Speaking about the people she likes to scroll past, Holly mentions Instagrammer Chessie King. In fact, Holly and Chessie are actually working on the Banter or Bullying? campaign together but the pair made friends long before that. "You always leave her page feeling so good," Holly says, and she commends Chessie for her authenticity too.

Speaking more about the people she follows, Holly says: “There are a lot of creators who seem so perfect and you might wish you could be like them but they’re not. That's not life and I’ve met them. No one is perfect.”

It's this kind of attitude that keeps Holly's fans coming back. But what else contributes to her success? TikTok cycles through trends at light speed. I mean, it’s hard to imagine that half the internet was dancing to a song about Tiger King’s Carole Baskin only a few short months ago. But Holly says creators need to focus less on keeping up with what's 'cool' and instead focus on building a genuine connection with their followers.

“It’s so important to make the content that makes you smile and makes you happy. When you’re vibing with your content, you’ll resonate with people. You’ll come across more confident,” she says. “Follow some trends if you want to but you’ll know the trend you want to take part in when it comes along.”

More like this
Matt Hancock’s TikTok Is The Most Matt Hancock Thing Ever
By Sam Ramsden
Here’s How You Can Watch The Grammys 2023 In The UK
By Emma Madden and Catharina Cheung
Blake Lively Is Trolling Ryan Reynolds Again – Over Wrexham FC
By Sam Ramsden
Twitter Has Renamed Ekin-Su After *That* 'Dancing On Ice' Performance
By Sophie McEvoy
Get The Very Best Of Bustle/UK
Sign up for Bustle UK's twice-weekly newsletter, featuring the latest must-watch TV, moving personal stories, and expert advice on the hottest viral buys.