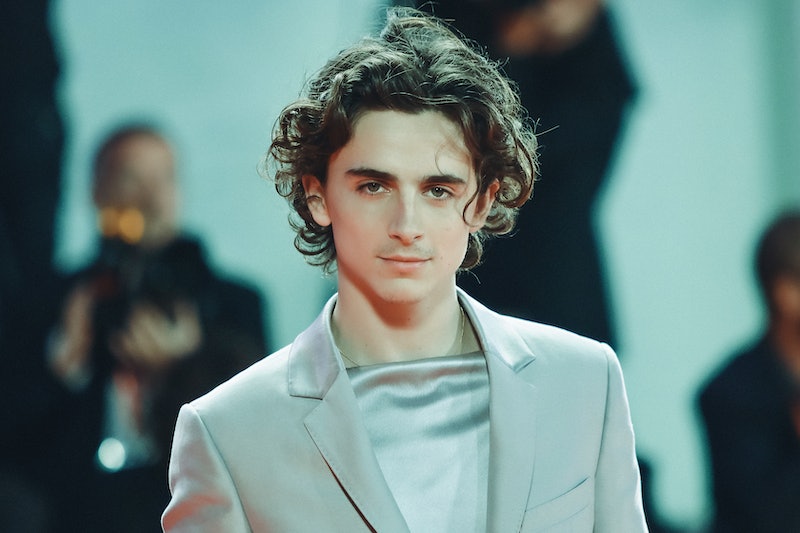 Timothée Chalamet wanted to do his best to keep his love life out of the spotlight — but one awkward paparazzi photo put his relationship on the map in the worst possible way. Chalamet addressed those infamous kissing photos with Lily-Rose Depp in a new interview, and admitted he was "embarrassed" by the ordeal. Especially when people posited that the whole thing was a PR stunt in order to promote their Netflix film, The King.

The actor opened up about the paparazzi pics taken during a romantic yacht trip to Capri, Italy, in a new interview with GQ. And though he refrained from giving away any real details about his rumored relationship with Depp, he did open up about seeing photos of them go viral online. "I went to bed that night thinking that was one of the best days of my life," Chalamet said of the getaway, which the pair took after the premiere of The King at the Venice Film Festival. "I was on this boat all day with someone I really loved, and closing my eyes, I was like, indisputably, ‘That was great.'"

However, all of those happy feelings disappeared when Chalamet woke up the next morning and discovered that the Internet had turned one particularly awkward photo of him kissing Depp into a meme. "And then waking up to all these pictures, and feeling embarrassed, and looking like a real nob? All pale?" he said, before explaining that was it wasn't just that people were joking about his appearance. He was also shocked that some thought the whole thing was a publicity stunt to promote their movie, saying, "Do you think I'd want to look like that in front of all of you?!"

Chalamet and Depp met in 2018, while filming The King in France; they were first spotted on a series of romantic dates in New York City in October of that year. "They were walking down the street and he stopped her and pulled her close," a source told Us Weekly at the time about the young couple. "They started making out for a while, for over a minute." However, despite their PDA-filled dates — and that yacht trip — neither Chalamet nor Depp every publicly confirmed or commented on their relationship.

However, in October 2019, Chalamet did talk about working with Depp on The King. "It was awesome and what great scenes [we shared]," he told USA Today, describing her character of Catherine of Valois as "fearless" and "righteous." Around the same time, Depp also praised the Oscar nominee during the film's press tour as a performer and a scene partner. "Timothée brings an emotional vulnerability to everything he does, almost without even trying. That's his gift," Depp told Vogue Australia at the time. "He's so immensely talented, and I feel like nobody could have taken on the role like he did."

Despite their affection for one another and respect for each other's talent, Chalamet and Depp reportedly called it quits in April 2020.

More like this
Keke Palmer Shares The Sex Of Her & Darius Jackson's Baby
By Jake Viswanath
Hilary Duff's Husband Matthew Koma Has Her Name Tattooed On His Butt
By Jake Viswanath and Stephanie Downs
Channing Tatum Calls Walking Away From Relationship With Jenna Dewan “Terrifying”
By Radhika Menon
Britney Spears Shares & Deletes Photos Of Justin Timberlake From 22 Years Ago
By Jake Viswanath
Get Even More From Bustle — Sign Up For The Newsletter
From hair trends to relationship advice, our daily newsletter has everything you need to sound like a person who’s on TikTok, even if you aren’t.