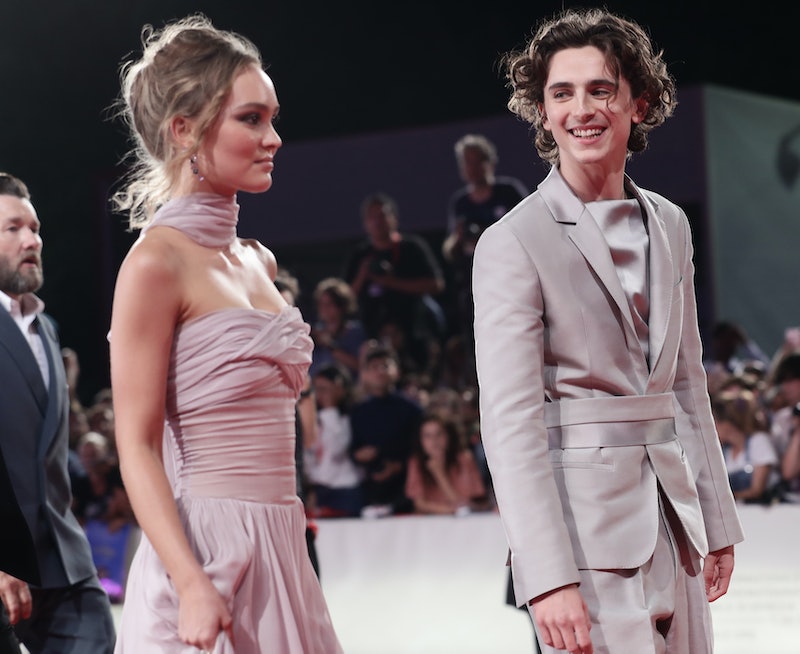 After more than a year together, Timothée Chalamet and Lily-Rose Depp are taking their reported relationship from real life to the big screen. Together, they're starring as husband and wife in The King, a Netflix movie based on the life of King Henry V. Since Depp and Chalamet have kept their dating lives pretty private so far, it can be hard to pinpoint where it all started — and where they stand as a couple today. However, this timeline of Depp and Chalamet's relationship should help clear things up a bit.

Although Chalamet has been acting for more than a decade, he's best known for more recent films like Ladybird and Call Me By Your Name, while Depp, the daughter of Johnny Depp and Vanessa Paradis, is more of a newcomer to the acting scene. As both of their careers have picked up, so has the interest in their relationship... even though neither of them have said much about each other in a romantic context — at least not yet. (Bustle has reached out to their reps for comment on their relationship status, but did not receive an immediate response.)

Here's everything fans need to know about Chalamet and Depp's relationship, from the time rumors first began to present day.

Although this has never been confirmed, Depp and Chalamet reportedly met for the first time while filming The King for Netflix — and they seem to have hit it off right away, because it wasn't long before they were spotted out and about together.

In an interview with Vogue Australia last fall, Depp didn't mention whether or not they were romantically involved — but she did reveal that she was impressed by Chalamet's talent while working with him on The King. "His performance is incredible," she said at the time. "Timothée brings an emotional vulnerability to everything he does, almost without even trying. That’s his gift. He’s so immensely talented and I feel like nobody could have taken on the role like he did.”

Chalamet and Depp were caught kissing in New York toward the end of last October, which many fans took as confirmation that they were officially together. Around that same time, fans also spotted them out and about looking pretty cozy together.

As People reported, paparazzi spotted them walking arm-in-arm in Paris right around Christmas time, seemingly continuing their romance. Or in the very least, continuing the romance rumors.

January 2019: Chalamet Brings His Mom To The Golden Globes

At the 2019 Golden Globes, Chalamet didn't bring Depp as his date — instead, he was accompanied by his mother, Nicole Flender. While at the award show red carpet, Chalamet dodged a question about his love life by shifting the spotlight to his mom. Then when Access Hollywood's red carpet reporter said, "Lily makes you speechless," the actor smiled and laughed.

September 2019: Their First Red Carpet Appearance & Some PDA On A Boat

In early September, Chalamet and Depp hit the red carpet for the premiere of The King at the Venice Film Festival in Italy. While in Italy for The King promo, Chalamet and Depp were also spotted kissing on a boat and having fun out on the water with friends.

October 2019: Depp Opens Up About Working With Chalamet

Unfortunately, Depp still didn't confirm or deny their relationship in n her interview with Entertainment Tonight — instead choosing to talk about how much she admires Chalamet's talent yet again. “It's always exciting to work with somebody who you know has given themselves so wholeheartedly to their role and is so invested,” she said. “It can be nerve-wracking to work with people whose talent you admire so much, but hopefully it can only make things better.”

While Depp and Chalamet have yet to speak publicly about their love lives, fans can at least watch their characters' on-screen relationship now that The King is out on Netflix.