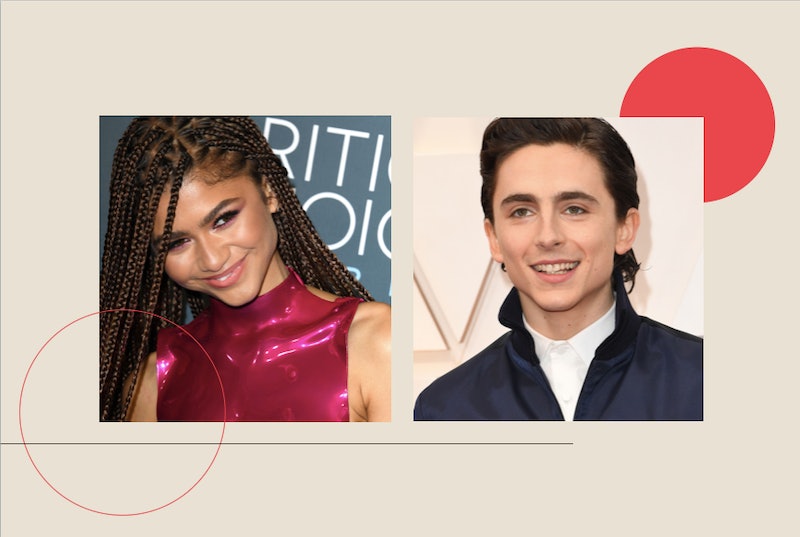 Zendaya has a lot to celebrate today: she's turning 24 with an Emmy nomination under her belt, the second season of her hit show Euphoria on the horizon, and the adoration of a certain Call Me By Your Name star-turned-teenage heartthrob. In honor of the actor's special day on Tuesday, Sept. 1, Timothée Chalamet wrote a birthday tribute to Zendaya that won over the hearts of both of their fans — and potentially broke the internet.

Chalamet took to his Twitter on this most special day to leave well wishes for his Dune co-star. And it quickly became clear that possibly no one loves Zendaya more than Chalamet. "Happy birthday to one of the most inspiring people I've met on my short journey," he wrote. "Someone with the strongest ethical character, and a moral compass that is in harmony with a totally fearless creative abandon. Happy birthday @Zendaya, hope your day is beautiful, friend." Now that's a nice birthday message.

The tweet comes after the release of a new photo of the pair in character on the set of Denis Villeneuve's upcoming sci-fi blockbuster Dune. In the highly anticipated epic, Chalamet portrays lead character Paul Atreides, who is forced to protect his desert planet Arrakis from doom, while Zendaya plays his love interest Chani, a mysterious woman from the Fremen tribe.

Of course, fans have been celebrating Zendaya's birthday all day, but nobody's message holds a candle to Chalamet's heartfelt well-wishes. In fact, the actor's adoration for his co-star has even shocked her most fervent stans. And now, fans are fawning over Zendaya and Chalamet's newfound friendship, ready to call him Zendaya's Number 1 Fan because of how intensely he seems to cherish and respect her.

However, before you start completely shipping their friendship, adjust your expectations accordingly. Both are reported to be in relationships with other young stars (see: those Jacob Elordi rumors). And, even onscreen, their interactions might be short. Zendaya told InStyle in a recent interview that her role in Dune actually isn't that big, but that she was proud of Chalamet's accomplishments in the film anyway. "When I was watching the trailer, I was like, 'Oh my gosh!,'" she said. "I called Timothée and said, 'Dude! You should be proud.' It is a big deal to even be a small part of something with such a massive cast."

Despite the news, fans are stanning the two new besties in full force, with some hoping that they end up dating, and others are joking that Zendaya already sent him to the friend zone. They would be the power couple of our generation, after all.