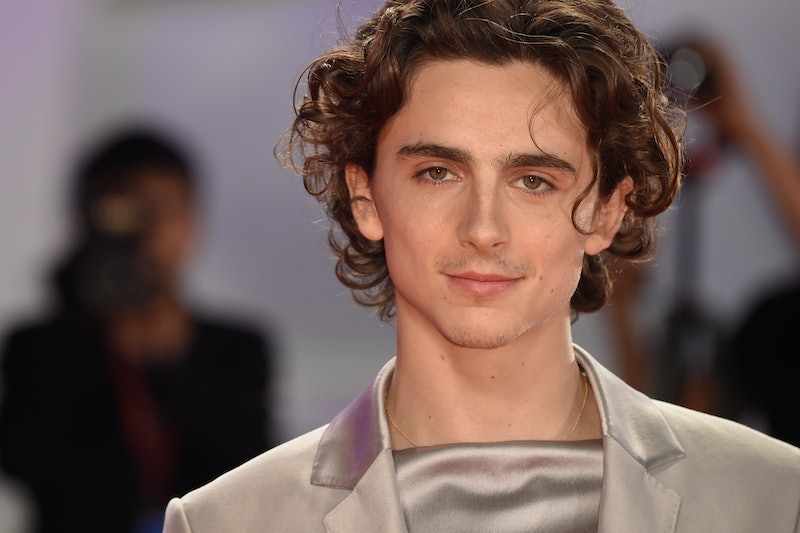 2020 has been an incredibly difficult year, but things may be turning around for the Timothée Chalamet hive. The actor will host Saturday Night Live on Dec. 12 with musical guest Bruce Springsteen and the E-Street Band, and it seems that the variety show may have singlehandedly redeemed 2020 for many of the Oscar nominees' fans.

According to Entertainment Weekly, Chalamet was supposed to host SNL to promote his upcoming blockbuster Dune, which was originally slated for a Dec. 18 release. However, in October, the film's release date was pushed to October 2021 because of concerns over the ongoing coronavirus pandemic. Unfortunately, it's not the only one of Chalamet's films to be postponed due to the pandemic; Wes Anderson's The French Dispatch was originally scheduled to premiere at the Cannes Film Festival in May, but will now arrive in theaters sometime in 2021.

Still, Chalamet's fans don't seem to care that the actor won't have an upcoming release to promote on the show. Based on the response on Twitter, many are content to simply see him on their screens this December:

In addition to Dune and The French Dispatch, Chalamet is also reportedly starring as Bob Dylan in an upcoming biopic from Walk the Line director James Mangold. The film will take place in 1965, and chronicle the folk star's controversial decision to switch from acoustic to electric guitar. While Chalamet may be best known for his work in dramatic films like Call Me By Your Name and Beautiful Boy, the actor has also started branching out into more comedic roles recently.

In October, Netflix announced on Twitter that Chalamet joined the star-studded cast of Adam McKay's new film, Don't Look Up. Details about his role have not yet been released, but according to Variety, the film — which will also star Leonardo DiCaprio, Ariana Grande, Jennifer Lawrence, Jonah Hill and Kid Cudi — is about two astronomers who go on a media tour "to warn the whole world of impending destruction from an asteroid." No premiere date has been announced, but filming is expected to begin before the end of the year.

Chalament isn't the only big star who will appear on SNL in the coming weeks. Jason Bateman is set to host the show on Dec. 5 alongside musical guest Morgan Wallen, and on Dec. 19, Kristen Wiig will take the stage with pop star Dua Lipa. Clearly, fans have a lot to look forward to on Saturday nights ahead of the holidays, and we're just hoping that Chalamet will get to witness Chloe Fineman's impression of him live on national TV.

More like this
‘SNL’ Finally Spoofed Nicole Kidman’s Weirdly Beloved AMC Ad & Nailed It
By Stephanie Topacio Long
Paul Mescal, Man Of Mystery
By Samantha Leach and Heather Hazzan
Here’s Everything Coming To & Leaving Netflix In October
By Jake Viswanath
Everything You Need To Know About ‘Black Panther: Wakanda Forever’
By Bustle Editors
Get Even More From Bustle — Sign Up For The Newsletter