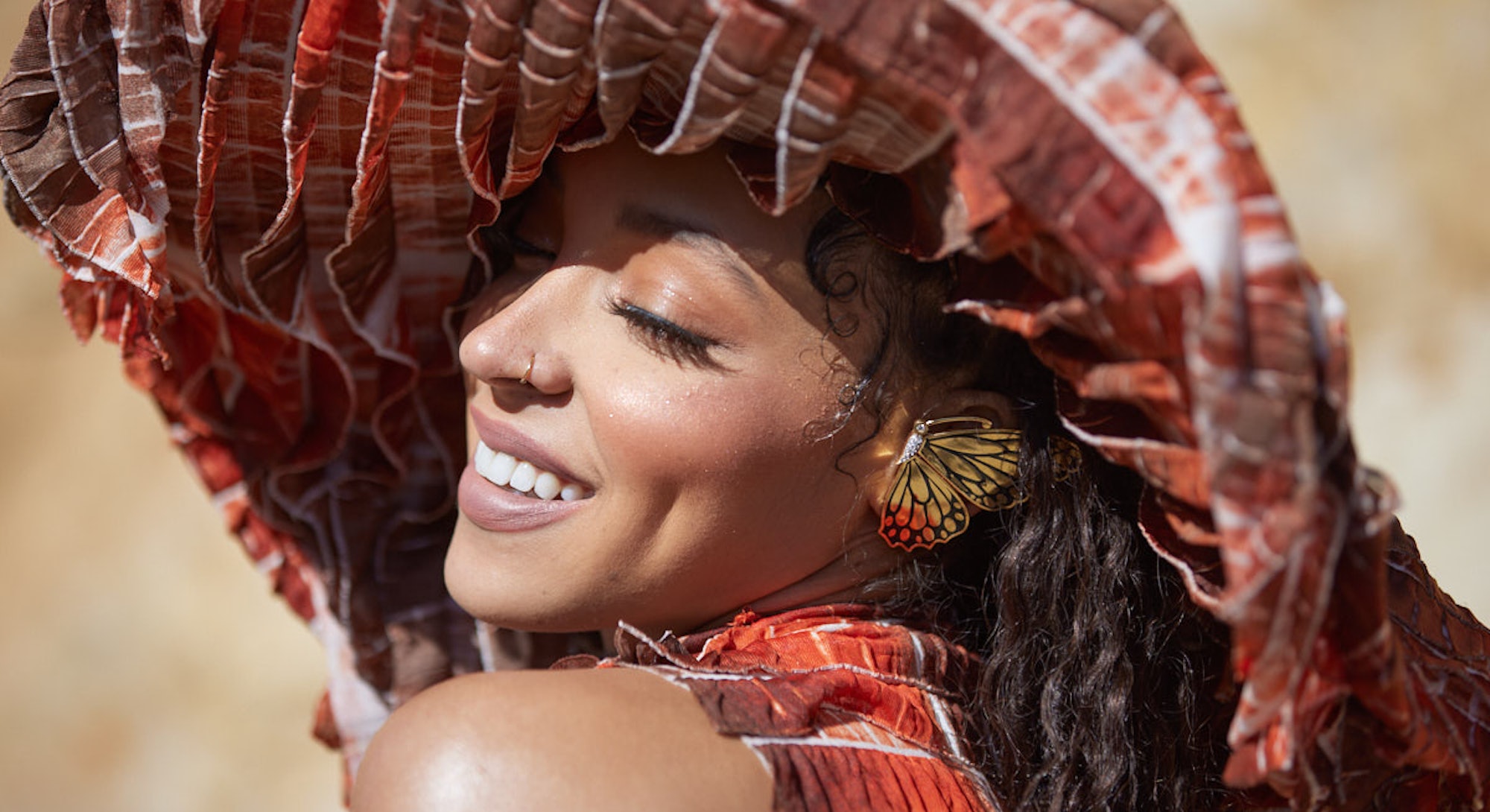 Tinashe still loves to get “2 On,” but now seven years after that debut single, she’s focusing more on herself. The triple-threat entertainer essentially built herself a wellness retreat while hunkering down during the COVID-19 pandemic. “I was vibing over here,” Tinashe tells Bustle, laughing. “It was like a resort. I had all my plants, I was waking up early and doing dance and workout classes on Zoom. I took that period as an opportunity to focus on things that I really didn’t have the time to.” Her emphasis on self-care — soundtracked by Thundercat, Erykah Badu, and mental health podcasts — inspired her new album that’s focused on movement and spirituality.

After a string of mixtapes that established her DIY-R&B roots, Tinashe made her mark with “2 On,” a Billboard charting trap-pop banger of such epic proportions that Twitter references it in memes to this day. Her 2013 major label debut album Aquarius, a bulletproof collection of glacial, atmospheric R&B and devastating pop ballads, showed she was a force to be reckoned with. And yet, her label apparently didn’t think so, sending her into long periods of inactivity and constant delays of her sophomore album Joyride, which came out two years after its scheduled 2016 release.

When she left the label, her supporters breathed a sigh of relief. “I think it was just a gut instinct, in terms of it was what I needed to do,” explains Tinashe, whose latest singles dropped July 9 (“Bouncin”) and June 9 (“Pasadena”). “I didn’t feel like the relationship was progressing in a way that was really productive or good for me mentally, so I thought, ‘I need to do what will fulfill me.’ And that's retaking control of my vision, rebuilding my confidence as a creative, and focusing on why I made music in the first place.”

Her first album as an independent artist, 2019’s Songs For You, proved that Tinashe can’t be boxed in, ranging from the electro-disco grooves of “Save Room For Us” and “Perfect Crime” to the hip-hop swagger of “Cash Race” and “Link Up,” where her alter-ego Nashe rears her head. Now, as the world opens up and she prepares to perform again after the cancelation of her planned 2020 tour, she’s about to give us something more spiritual: 333.

“333,” a number she’s casually inserted into teaser videos over the years, is now becoming an album of the same name, inspired by the impact that her “angel number” has had on her. “I think it’s always felt like a good omen to me, something that feels like there’s good things coming in the future,” she says. “It reminds me that I’m always on the right path and the universe is looking out for me at the end of the day.” 333 will continue Tinashe’s exploration of genre, with a renewed focus on high-tempo and hard-hitting beats that will make you move. “I think that’s so underrated in how important it is spiritually and emotionally, just to be able to dance and have fun in our day-to-day lives,” she asserts.

The first single, “Pasadena,” starts the 333 music era in her hometown. Sonically, it’s tailor-made for a post-pandemic beach day, with dreamy guitar strums, an Outkast-inspired breakbeat, and hooks that slowly creep in your head. “I felt very inspired to make music that I think felt uplifting and exciting and hopeful, I think as like a natural reaction to being stuck in the house and kind of feeling the opposite of that,” she says. Lyrically, it shows the Los Angeles that she grew up loving, and still dreams about today.

“As somebody who grew up in LA, you look at it a little bit differently than maybe people who move to the city when they’re adults,” says the singer, dancer, and actress. “I think we see a side of the city that has more culture and more heart, and there’s real people and real families and real stuff that people are going through outside of the Hollywood tropes and the typical version of LA life that we see, whether it be on TV or in the media — the city has so much more to offer, so much color, so much depth.”

While she’s hesitant to name names, Tinashe confirmed that 333 will include male and female featured artists. One of them just might be Ariana Grande, who she sent songs to in August, but she plays coy about wanting to collaborate with Grande when asked directly. “I think, why not?” she says. “I’d like to think so and hope so.”

[Britney Spears] is an absolute queen, legend, icon. She really just has this essence about her that feels like such a star, and she’s been doing it for her whole life, you can tell.

For such a relatively young artist, 28-year-old Tinashe has worked with an impressive amount of A-listers, from Travis Scott on 2013 mixtape track “Vulnerable” and A$AP Rocky on Aquarius single “Pretend” to Britney Spears on a remix of the Princess of Pop’s 2016 single “Slumber Party.” She even got to writhe around in a lavish mansion for their now-iconic music video.

“She’s an absolute queen, legend, icon,” says Tinashe about Spears. “I think my biggest takeaway and favorite thing about working with her was just really seeing that come to life every time I was in her presence. She really just has this essence about her that feels like such a star, and she’s been doing it for her whole life, you can tell. In front of the camera, she’s just insane. And being on stage with her, she was so sweet, she had such a great energy that really welcomed me and was always really kind to me.”

Working with Spears was a full-circle moment, given how much she influenced her dynamic performing style. Today, Tinashe is one of few performers carrying the torch planted by Spears, Beyoncé, and Janet Jackson, who made intricate, dynamic choreography such an integral part of their live shows and music videos. “That, to me, was what being a pop diva was about,” she says. The music video for “Bouncin” only reinforces this manifesto with its dazzling trampoline choreography, showing that Tinashe needs nothing but an empty room to make a moment.

Recently, artists like Dua Lipa have emphasized dancing and showmanship, but Tinashe would like to see more artists step up a notch. “The girls are doing steps now, which is exciting to see because when I first came into the game, there weren’t that many other people doing choreography,” she recalls.

As Tinashe moves into the next phase of her career, dancing (and just performing live again) remains her top priority, whether she’s playing 333 on her upcoming 2021 tour or throwing it back to “2 On” for her longtime devotees. And yes, she’s seen the memes. “Keep ‘em coming,” she says. “They’re amazing. I really like the ‘When the tree be way too strong’ ones.” In Tinashe’s words, keep getting faded, turned up, and pour it on up ’til you can’t even fake it no more.