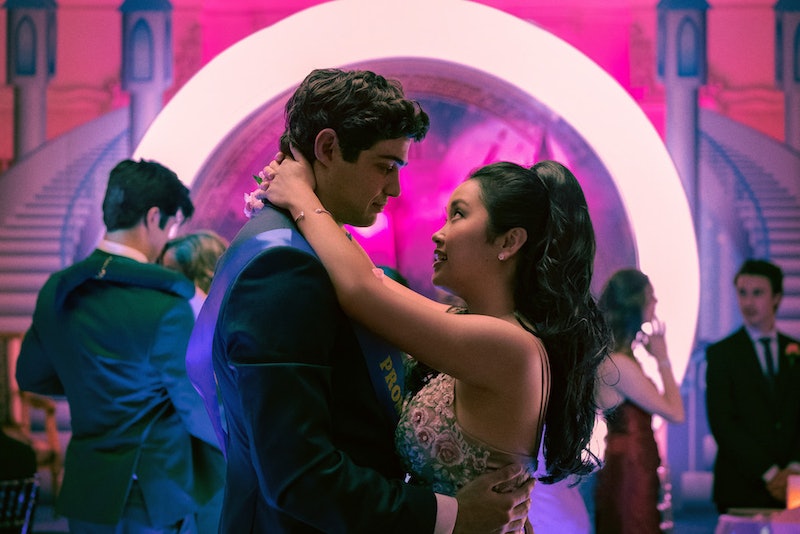 If you were under the impression that Lara Jean Covey and Peter Kavinsky's relationship could withstand anything after John Ambrose McClaren shook things up in To All The Boys: P.S. I Love You, you may want to reconsider. The franchise's third film will be here in no time and the high school sweethearts will have to face yet another major challenge: college.

While LJ and Peter shippers might be hoping they both get into Stanford as planned so they can continue their love story after senior year, the trailer that Netflix released on Jan. 13 seems to suggest things won't be that simple (but hey, are they ever?). Don't worry, though — the two still have a lot of exciting milestones ahead before they bid farewell to high school forever, including prom, a senior trip to New York City, and graduation.

Longtime fans of the movies (and the books they are based on by Jenny Han) understandably have a lot of questions ahead of the third film: Will Lara Jean and Peter break up? When will the movie hit Netflix? Is this the end of the beloved franchise? These, of course, are all valid questions, so here's everything you need to know about To All The Boys: Always and Forever.

When Will To All The Boys: Always And Forever Be Released?

Just in time for Valentine's Day, the third To All The Boys movie will debut on Netflix on Friday, Feb. 12. The streaming service announced the premiere date alongside a new trailer on Wednesday, Jan. 13, just one day after unveiling its movie slate for 2021.

What Will The Third Movie Be About?

While the second film introduced a potential new love interest, the third installment will throw an even bigger obstacle Lara Jean and Peter's way: life itself. It's officially senior year in high school, and while that final hurrah brings prom, life-changing trips to Korea and New York, and other excitements, the young couple is now faced with the possibility of attending different colleges miles and miles apart. Will they call it quits? Will they make it work? Will our emotions be able to handle it?

Netflix released the first trailer for To All the Boys: Always and Forever on Wednesday, Jan. 13. In the clip, Lara Jean returns from spring break in Korea with her sisters and prepares to tackle senior year. A promposal, senior trip, and other special moments are explored as Lara Jean must make decisions about her future. "The world keeps shifting under my feet," she says in the trailer. "All I want is for it to stand still."

Yes. Lana Condor and Noah Centineo will reprise their roles as Lara Jean and Peter. Janel Parrish and Anna Cathcart will also return as Lara Jean's sisters, as well as John Corbett as their father, Dr. Covey. Madeleine Arthur will be back as Lara Jean's good friend Christine, while Emilija Baranac is set to return as Peter's ex-girlfriend Gen. Additionally, Sarayu Blue will once again play the Coveys' neighbor and Dr. Covey's love interest, Trina Rothschild.

Is This The Final Movie In The Franchise?

Unfortunately, the third film marks the final installment of the franchise based on author Jenny Han's best-selling book trilogy series of the same name. For those who will have trouble letting go, Han has a series of other young adult titles, such as The Summer I Turned Pretty series. Reading the To All the Boys trilogy again and rewatching the film adaptations are also solid coping mechanisms to deal with the fact that the end is near.