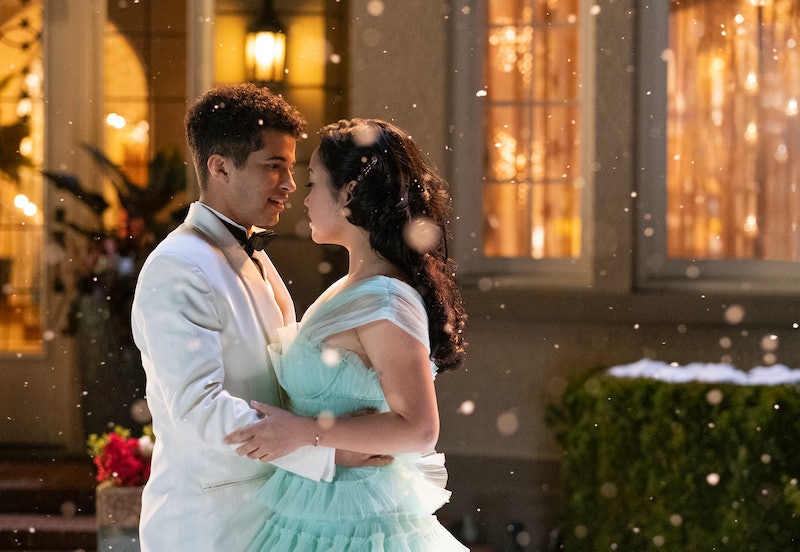 Lara Jean Covey and Peter Kavinsky forever — or, maybe just until John Ambrose McLaren shows up. Set a year after the events of the first Netflix rom com, the new trailer for To All The Boys 2 teases trouble in paradise for Lara Jean (Lana Condor) and Peter (Noah Centineo) when the recipient of one of her other love letters reappears in Lara Jean's life. And if you thought that nobody could make you swoon more than Peter Kavinsky, you haven't seen Jordan Fisher as John Ambrose McLaren yet.

Peter — who is as handsome and charming as ever, based on their romantic carnival date and the way he brings Lara Jean flowers when he picks her up at her house — is clearly happy in his relationship with Lara Jean, but she's struggling with the fact that the rest of the school is just as in love with Peter as she is. "Sometimes I wish my boyfriend was more anonymous," she tells Lucas (Trezzo Maharo) after watching an avalanche of valentines spill out of Peter's locker.

Adding even more complications is the fact that John Ambrose McLaren is volunteering at the same assisted living home as Lara, and he's still got feelings for her. "I need proof that someone actually liked me in middle school," John says, after Lara Jean asks for her love letter back. "Everyone liked you in middle school," she counters, to which a grinning John replies, "I didn't care about everyone." No wonder Lara Jean can't help but "thinking of what might have been" with a line like that.

If you're feeling conflicted over which one of these handsome boys Lara Jean should end up with, To All The Boys 2's director Michael Fimognari told Entertainment Weekly in December that's exactly what he's hoping for. "We certainly want there to be a Team Peter and a Team John," he said. Condor also weighed in on the budding love triangle. "They’re true friends,” she hinted. "But because you can love your friend very much, you get confused. You’re like, 'Do I love him or do I love him as a friend?'"

Still, the love triangle isn't the only big change in Lara Jean's life. In January 2019, Condor told Entertainment Tonight that she's hoping To All The Boys 2 — and the third movie, which has already wrapped filming — will allow fans to see a more confident and self-assured Lara Jean. "I think she grazed the surface on finding her own personal confidence towards the end of the first movie and I would love nothing more than for her to be a little bit more stand-up," she explained. And if part of that confidence leads her to explore a relationship with John Ambrose, well, so be it.