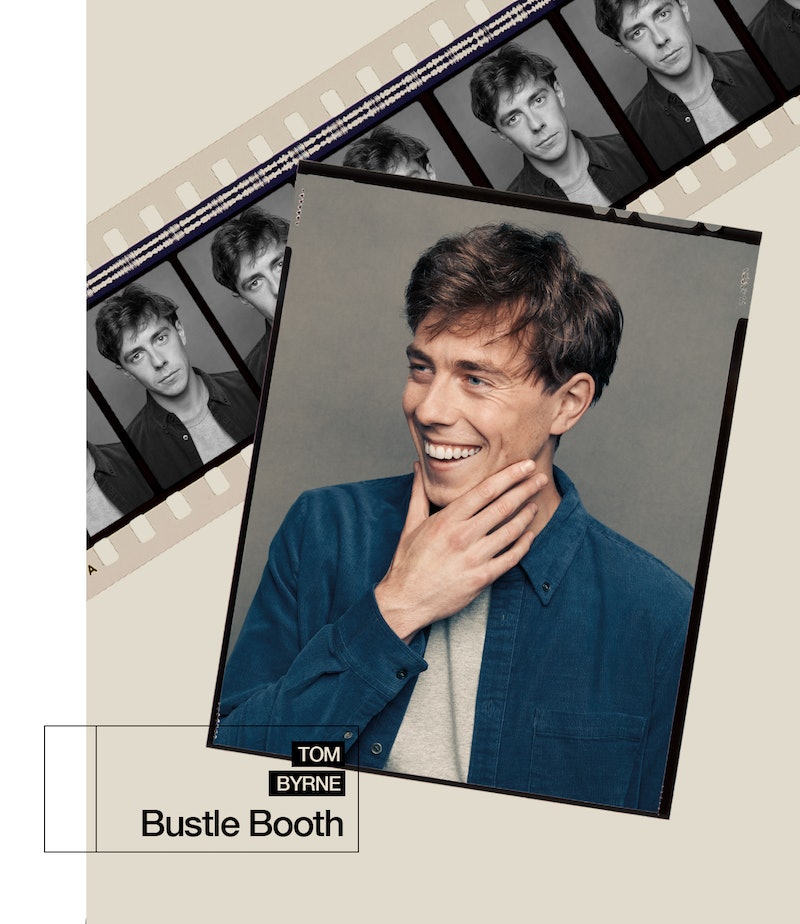 “It’s still crazy that I get to act and I’m being paid to be there, it’s a great thing that never goes away,” muses The Crown’s latest cast member Tom Byrne. The 26 year old debuts in season four as a young Prince Andrew, and while playing a member of the royal family comes with considerable pressure, Byrne says that acting has always been the job for him.

It all started when he played the part of “the Artful Dodger in an amateur dramatics production of Oliver," he tells Bustle. "It was an incredible experience. I got such a buzz from it and the attention I craved, which made it clear acting was what I wanted to do.”

He went on to attend Bristol Old Vic Theatre School – as didThe Crown’s Josh O’Connor. In fact, it was here that he first heard about the royal saga. “I remember everyone at drama school saying you need to watch this series with Claire Foy and Matt Smith, and I was turned onto it,” Byrne says.

Playing Prince Andrew sees him share the camera with Olivia Colman, who returns as The Queen in season four. “I feel very lucky to have worked with people like Olivia so early in my career," Byrne says. "She was great, so much fun, light, and playful. She’s a really lovely person. I immensely enjoyed the days I got to work with her.”

Last autumn, as filming for season four began, the real-life Prince Andrew hit the headlines following his Newsnight interview with Emily Maitlis. It didn't affect how he played the role, however, says Byrne. “People are going to apply their own judgments to the character and person anyway, that’s not my job,” he explains. “So, I thought I’d play him without my own judgement, because that’s the best way to serve the character."

"I had a script helping me out, and I’m playing him in his twenties. On every level I thought it was best that I didn’t engage with it,” he continues. “I’m quite lucky in the sense that there isn’t a great deal of media of him from the '80s, so I felt [I could use] some artistic license.”

Previously, Byrne has appeared in Sky’s A Discovery of Witches and Netflix’s Black Mirror, and he's also starred on stage in Shakespeare’s A Twelfth Night and Dickens' A Christmas Carol. When we spoke, he was filming Richie Adams' adaptation of John Makay’s The Road Dance, which is another drama based on a true story.

Playing a famous face is something he'd like do again, post The Crown, he says. “I like the idea of doing a biopic of a great '70s frontman, like Jim Morrison, Iggy Pop, or David Bowie. I’d love to get inside their heads, and hang out with them for a bit. That’d be a really cool thing to do.”

He assures us that like most The Crown fans, he'll be glued to Netflix watching season four. “Now that I’ve seen my bits I can’t wait to see everyone else's. I’m looking forward to enjoying it as a fan.”

Get to know more about Byrne in his Bustle Booth questionnaire below.

It’s a large oat latte – including coffee art! It’s nigh on impossible with oat milk, but I’ve seen it done.

“One does not simply walk into Mordor.”

What’s one movie or TV show you are currently obsessed with?

The Queen’s Gambit on Netflix.

I love Bowie and Stevie Wonder.

What would want people to say about you?

As long as there’s no mention of clammy hands, I’m happy.