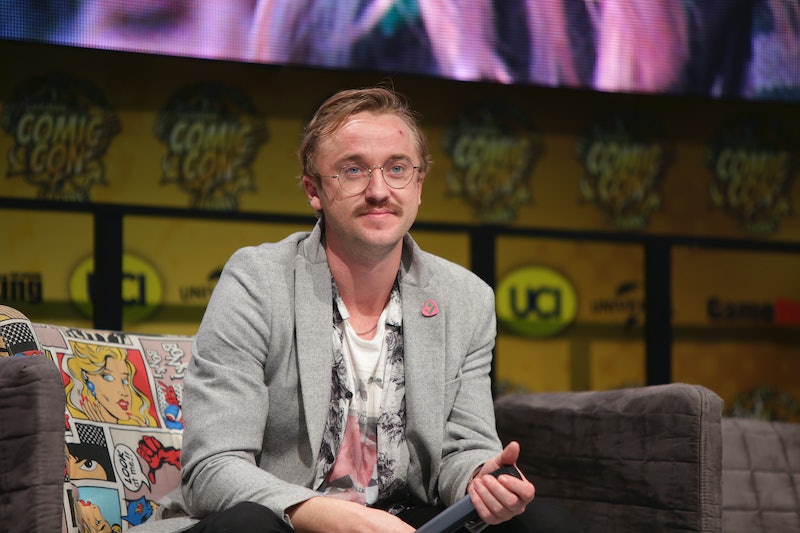 Not even the cast of Harry Potter is immune to the magic of the film franchise and the memories it inspires. Tom Felton teared up while watching Harry Potter for the first time in 20 years with his followers as part of a "viewing party" on Instagram Live on Nov. 30. To celebrate the 19th anniversary of Harry Potter and the Sorcerer's Stone, Felton — who played Draco Malfoy in all eight movies — joined fans to watch the 2001 film for the first time in "probably 20 years."

While the intention was for Felton to offer up some commentary and behind-the-scenes tidbits, it turned out that the entire exercise made him quite emotional. "Oh my god. It's mental," Felton said at multiple points throughout the clip, each time laughing and sniffling as he attempted to hold back tears. The actor was particularly overwhelmed when his co-star, Daniel Radcliffe, first appeared onscreen, joking that the actor "looks like he's five" before telling himself to "get it together."

Though he ended the video after watching "the first 11 minutes and 11 seconds" of the movie with his fans, Felton promised that he would keep his emotions in check for future installments. "I'm just tearing up rather than giving you commentary, but it will get better," he said. "I think the best is yet to come in these movies. We're definitely going to try this again."

Felton made good on his promise on Dec. 1 with another installment of his viewing party. He got visibly emotional at multiple points, particularly when Harry read his Hogwarts acceptance letter and when he and Hagrid (Robbie Coltrane) arrived at Diagon Alley. "I definitely have not seen this in at least 20 years," the actor explained. "Definitely 20 years. I don't think I've ever seen this. I haven't seen this footage since the premiere — it's like I'm watching this for the first time!"

The Harry Potter watch parties aren't the only way Felton's attempted to celebrate the anniversary of Sorcerer's Stone amid quarantine. In November, he hosted a virtual reunion with the cast and spoke about filming with co-stars Radcliffe, Rupert Grint, Emma Watson, and James and Oliver Phelps. Like Felton, the other members of the cast couldn't believe it's been nearly two decades since the film's release.

"I feel like we'll be doing a lot of reminiscing, probably in various forms next year," Radcliffe said. "It seems impossible that all that time has passed and it all obviously feels very fresh still cause they were my formative years. It has been amazing to watch the whole thing continue to grow after the films finished."