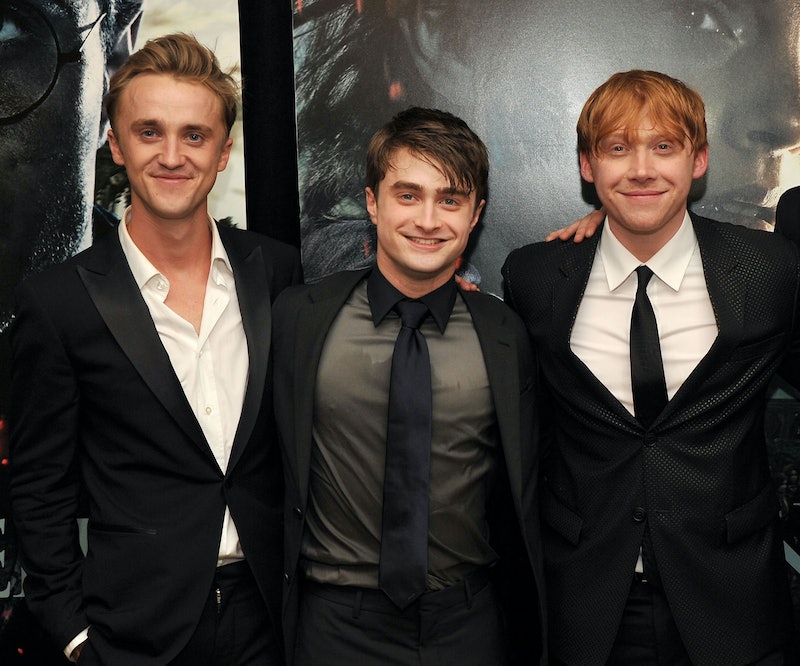 Potterheads, you might want to sit down for this one. Draco Malfoy and Harry Potter recently hung out in real life and it's even more amazing than it sounds. Tom Felton and Daniel Radcliffe had a Harry Potter reunion and, thankfully, there's photographic evidence. Felton was kind enough to post a reunion photo on Instagram on Friday. Once you see the picture, you're going to be overjoyed and probably also want to throw on your house robe and enjoy a Harry Potter movie marathon, which is always appropriate.

The gathering occurred backstage at Radcliffe's play The Lifespan of a Fact, which is currently on Broadway in New York City. The play also stars Cherry Jones and Bobby Cannavale. Well, Felton attended a show and based on his Instagram caption, he enjoyed it very much, just like Radcliffe's performance.

Felton wrote about the play and the actor who brought Harry Potter to life,

"Go see it. He’s fantastic as per @lifespanofafact"

And as you can see below, the two look beyond happy to be standing next to each other once again. Felton and Radcliffe wrapped their arms around each other for the picture and also wore the biggest smiles on their faces.

Obviously, Felton and Radcliffe are no real-life Draco and Harry. Even though the characters weren't friends and lived very different lives, these two actors are definitely on the same page and genuinely care about each other. It's lovely to see. Like Felton gushed about Radcliffe to PopSugar in 2013 at the Toronto International Film Festival, "He's a fantastic actor and a brilliant guy."

There have been plenty of Harry Potter reunions over the years, including this past August. On Aug. 19, Felton and Matthew Lewis reunited. They shared their epic meeting with two perfect photos posted on Instagram. First, there was Felton's Instagram, which showcased the actor jokingly pressing a Slytherin backpack against Lewis' chest. How perfect is that?

Felton captioned his post, "See how close he was to converting.... @mattdavelewis #gryffindork." As you can see above, Lewis channeled an annoyed look, just like his character, Neville Longbottom, a proud Gryffindor, would totally do if Draco ever did this to him.

Lewis also shared a similar photo with Felton on Instagram that same day, where he gave an even more irritated and such a Neville facial expression. He wrote next to his post, "Take your Slytherin paws off me, you damn dirty ape! @t22felton." That sounds about right.

It's hard to believe that it's been seven years since the second part and final film of the franchise, Harry Potter and the Deathly Hallows, was released. Ever since then, the love for the magical stories beautifully created by J.K. Rowling continue to be cherished by fans. They still can't get enough, especially when it comes to Harry Potter theories. The same can be said about the actors who played Rowling's characters. Fans adore them and their portrayals, so, now, when cast members reunite, it's nothing but a cause for celebration.

Are you screeching like a mandrake yet? Yeah, same.