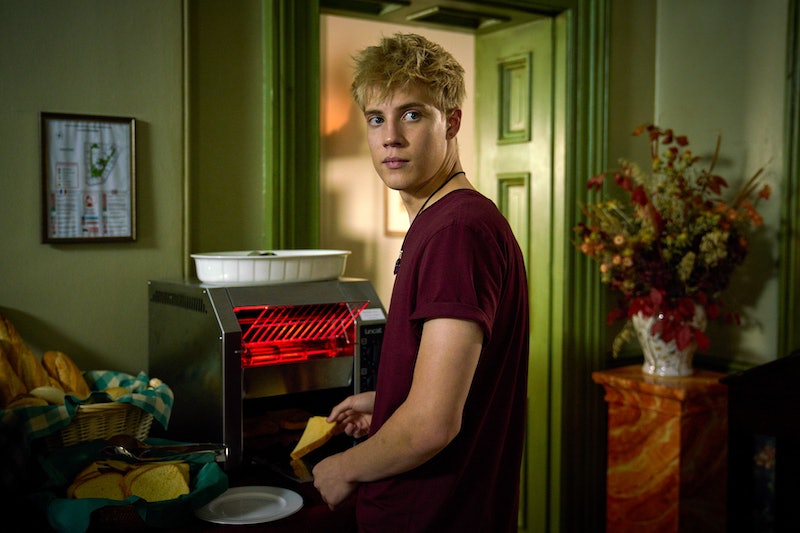 Adapted from the best-selling novel by David Nicholls, the BBC's Us follows the adventures of a family who embark on a meticulously planned European vacation, encountering several road bumps along the way. The comedy-drama's cast is led by Tom Hollander and Saskia Reeves, who star as the at-odds parents of a teenage son. But who is Tom Taylor, the actor who plays Albie in Us?

Tom Taylor is a British actor, best know for his portrayal of Tom in the BBC drama Doctor Foster. Prior to his appearances in The Last Kingdom, Tom Hardy's Taboo, and more, Taylor attended The Secret Stage School in Camberley — a school he later dropped out of back in 2013. However, the actor was eventually convinced to return by a teacher, who later introduced the rising star to acting agents. Taylor landed his first major gig as a one-off guest star in the long-running medial drama Casualty, and as the Radio Times reports, has gone on to appear in the 2017 fantasy flick The Dark Tower opposite Idris Elba and Matthew McConaughey, 2019's The Kid Who Would Be King, and the U.S. crime drama Legends.

The actor's latest role can be enjoyed in the BBC's Us, in which plays the character of Albie Peterson — an aspiring teenage photographer, and the only child of a couple of the brink of separation.

As previously mentioned, the BBC's latest adaptation is based on David Nicholls' hugely popular novel of the same name, and follows the story of Douglas Petersen (Hollander) — a seemingly-happy family man who plans a grand tour of Europe with his with Connie (Reeves) and teenage son. However, before they've even begun packing their bags, Connie drops the bombshell that she wants a divorce, prompting David to try and win back her love throughout their dysfunctional family holiday.

Commenting on the new series, Controller of BBC Drama, Piers Wenger, revealed that he was "honoured" to bring Nicholls' "beautiful" novel to the small-screen, whilst the author himself, who also adapted the BBC offering, credited the show's "wonderful cast."

"It’s a huge thrill to see the novel come to life, and with such a wonderful cast and production team. We want to make something funny, touching and beautiful, to really explore marriage and family life, all against this incredible backdrop," Nicholls explained.