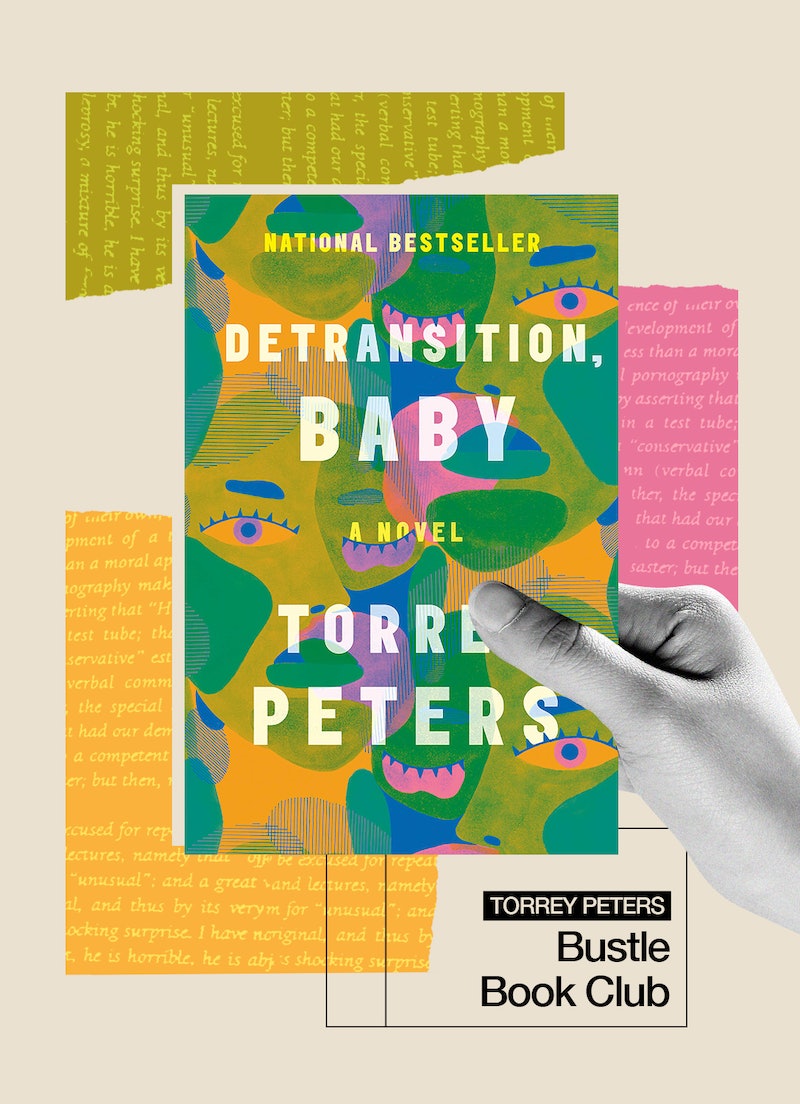 When Torrey Peters reflects on the authors who paved the way for her “mainstream” success, one comes to mind above all else: Toni Morrison. It was around 2013, and Peters had been reaching out to agents with an essay she’d written about transness — but they weren’t buying what she was selling. “I got the sense that two things were happening. One was they were like, ‘People won't be interested in this without a lot of explanation.’ Two, ‘We think this is a little bit icky,’” Peters tells Bustle. “They didn't use the word icky, but [it was like] this is just a bunch of fetishes. There was a latent transphobia in the way it was written to me.” Peters didn’t quite understand how to bridge the divide between the vital work she was producing and publishing’s gatekeepers until she was urged to reflect back on the ground Morrison broke on behalf of the Black literary community in the ‘70s.

“I started thinking about trans writing as minority literature and I realized so much of what we were inventing had already been invented by Toni Morrison, the Combahee River Collective, and other Black women writers,” says Peters. “Instead of reinventing this wheel — which in some ways we [as trans writers] were doing — there was actually a blueprint for it that had already been offered. If we could see this literature of liberation as an umbrella and a gift given to other minority literatures, we could take it up.”

With the publication of Peters’ bestselling novel, Detransition, Baby — which is among the first written by a trans woman to be released by a big-five publisher — she’s furthered this gift for many minority writers to come. And in doing so she’s also given a gift to readers everywhere, in the form of an exhilaratingly original, effervescently written treatise on our ever-shifting relationship structures. Detransition, Baby follows Reese, a trans woman who’s had her heart broken after her former girlfriend Amy detransitioned and became Ames. The book begins after Ames has impregnated his new lover, Katrina, and reconnects with Reese in the hopes that she’ll help them raise the baby. “The really specific case of transition ends up becoming a sort of analogy or a synecdoche for things that are happening in a generational setting,” Peters explains.

Since the book’s release in January, it’s been longlisted for the Women’s Prize for Fiction, become a national bestseller, and is being adapted into a television series by former Grey’s Anatomy writer-producers. (At the time of publication, Peters was in final negotiations with a streaming service to become the home for the series.) Gatekeepers be damned. Below, Peters reflects on reading Moby Dick, shooting pool, and her odd taste in audiobooks.

On the trans authors who shaped her:

I read some novels, especially one called Nevada by Imogen Binnie, where she was writing for other trans women. [Reading] it felt like being a portrait painter in the countryside and then you go to Paris and Cubism is happening. It was just like, "What? You can do this?" Then I realized that at the same time as Imogen, writers like Sybil Lamb and Morgan Page were also publishing things. And before them, Rachel Pollack.

Some other writers on parallel trajectories might be T. Fleischmann [who wrote] Time Is the Thing a Body Moves Through, and Jackie Ess, who has a book coming out in May called DARRYL. Out of the UK, there's a book called LOTE by Shola Von Reinhold that came out last year [from] Jacaranda Press, which is this tiny British press. But I read that and I was like, "This feels like such a parallel to the concerns in NYC trans writing, except this Black dandy spin on the Bright Young Things era style.”

On getting pumped up via management audiobooks:

I like books for middle managers. It's a pep talk that's like, "Keep at it and it'll be fine. Time management's important. Keep those productivity numbers up!” I don't have any headphones so I actually play the audiobooks in my house ambiently. It feels a bit like a slow work version of having a coach. Like, "Get out there again!" In a certain way writing isn’t exciting, right? You just set up the computer and [sit at it], which is really what middle managers also have to do. Just be there and process things. So that's what speaks to my soul.

On how she celebrates a good day of writing:

I'm actually a pretty good pool player. When I lived in Chicago there was this neighborhood bar where people would come and play pool. I didn't even know the names of all the people that played there. We just had nicknames for each other. There was this one guy who was really tall and lanky and when he was leaning over to play pool, he looked like a Daddy Long Legs. So we just called him The Spider and we'd be like, "We played pool against The Spider last night!" I could walk to that bar, play one game, feel like I socialized, and that I had an adventure.

On becoming an accidental coffee connoisseur:

When I didn't have very much money, I found out that you can buy green [coffee] beans in bulk. If you just get a little coffee roaster, you can buy pounds and pounds of good, green coffee and just roast it as you need it. The beans have a shelf life of two years. I got in the habit of roasting my own coffee as a cost benefit thing, which is funny because it sounds so incredibly bourgeois. So I roast my own coffee and I usually drink shots of espresso [while I’m writing]. It just sounds so foodie-like.

On her über-literary procrastination method:

I tell myself that I need to read more books [when I’m procrastinating]. All the reading is aspirational reading. I just ordered another copy of Moby Dick because I was like, "I need to read something extremely epic." And the truth is, I'll never read Moby Dick. But I will pick it up, hold it, and read the first 20 pages being like, "Now, I'm enriching myself!” Which is really just because I don't want to do whatever I'm doing, and it feels like nobody can blame me for reading Moby Dick. Right?